HOME / SOCIAL/CULTURAL / 2020 Is Going To Get Much Crazier. Prioritize Your Mental Health. 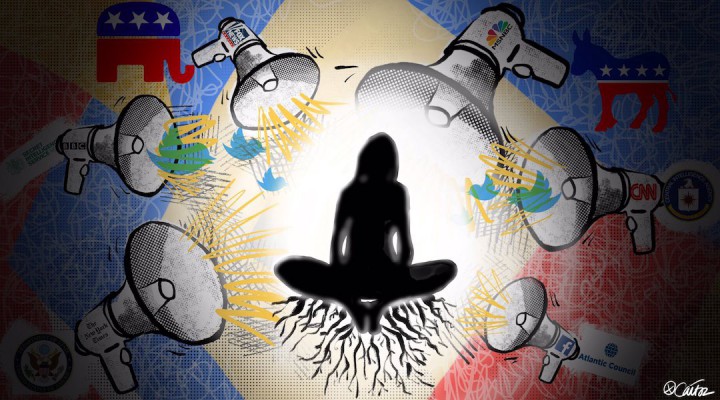 The outrage over the Iowa caucus scandal has continued to burn white hot as more and more establishment manipulations against the Bernie Sanders campaign come into view.

At the beginning of a CNN town hall with Democratic presidential candidate Pete Buttigieg last night, immediately following the network’s town hall with Sanders, the event’s host Chris Cuomo announced that 100 percent of the caucus results were now in and the former South Bend mayor had narrowly won the contest. These results had been announced by the Iowa Democratic Party moments before Buttigieg’s town hall appearance.

There is no reason for anyone, let alone a major news outlet, to believe these results are legitimate. They are full of easily demonstrable errors and discrepancies which have been highlighted by both the Sanders campaign and The New York Times, and they have yet to be addressed. Furthermore, Sanders has a perfectly legitimate claim to the win given the undisputed fact that he received thousands more votes. This is without even getting into all the other extremely shady shenanigans with the now-infamous Shadow app whose crash has given the media days to sing Buttigeig’s praise, which has in turn given him a major polling bump for New Hampshire.

But Chris Cuomo (who is the brother of a Democratic New York governor and the son of another Democratic New York governor) declared Buttigieg (who because of his establishment grooming and alt-centrist ideology is beloved by billionaires and spooks) the winner anyway. In front of millions of people. While Buttigieg was standing right there in the spotlight. Immediately after the “results” were released.

Think about the level of coordination it takes to try to pull off such a brazen fraudulent move. It takes the Iowa Dem Party, the DNC and CNN. All working in cahoots.

We’re watching a major US election being rigged in real time, right in front of our eyes, and it’s intense. And it’s only just getting started.

In the 2016 race between Sanders and Hillary Clinton, the Iowa caucuses saw some suspicious activity and there was some controversy over improbable coin toss results, but nothing like the furor we’ve been seeing over Iowa for the last several days. It wasn’t until the Nevada caucus that things really started to get crazy in the 2016 race, and we’re still a couple of weeks out from that.

So we’re way ahead of schedule in terms of emotional intensity tied to this presidential primary race, and possibly at a more heated point after the very first 2020 primary contest than at any point in the 2016 race between Sanders and Clinton. And it’s only going to get crazier from here.

And that’s just looking at the US Democratic presidential primary. Later this month we’ve got the beginning of Julian Assange’s extradition trial, we’ve got the OPCW narrative managing its own scandal by smearing the whistleblowers who revealed that the US, UK and France almost certainly bombed Syria in 2018 under false pretenses, we’ve got continuing revelations that pretty much everything the Trump administration told the world to justify the assassination of Qassem Soleimani was a lie, we’ve got an escalating new cold war between the US and Russia, increasing establishment attempts to censor the internet, an increasing propaganda war against China, the general militaristic belligerence of the US-centralized empire, and God knows what else.

As I said back in November, things are going to get weirder and weirder throughout the foreseeable future. We’re coming to a point in history where the only reliable pattern is the disintegration of patterns, and 2020 has come storming out of its corner swinging for the fences working to establish this pattern with extreme aggression. We’re not going to hit a point of stability or normality this year, we’re going to see things get crazier and crazier and crazier. I don’t know what’s going to happen, but I know it’s going to be nuts.

"I often hear people in my line of work saying 'Man, we’re going to look back on all this crazy shit and think about how absolutely weird it was!'
No we won’t. Because it’s only going to get weirder."https://t.co/z5ivGMEMoY

In such an environment, it’s going to be absolutely essential to take exceptional care of your psychological health if you want to remain engaged with what’s going on in the world in a positive way.

And I do mean exceptional. Whatever you’re doing now, do more. Start cultivating new habits to keep yourself lucid and serene, and start now before things get super crazy. Work out your issues with your family and with yourself. Remember to move your body in ways that feel good to you. Carve out some time out each day for just being quiet with yourself. Notice the beauty around you. Give cuddles, get cuddles. Take a shower and sing your heart out. Feel your feet on the floor, nestle your bum into your chair and listen to yourself breath like it’s a song on the radio. Yawn. Belch. Stretch. Roar. Put on some loud music and rock out. Whatever you know works for you to get you out of your head and back in to your body, remember to do it, and remember to do it regularly. Make it habitual.

Be proactive with this rather than reactive; if you wait until you have to react to things going ass-side up later on it’s going to feel like you’re fighting to get your head above water. If you do it now you’ll have the mental space needed to navigate tumultuous waters.

This is what will be necessary if you want to engage with the increasingly frenetic narrative matrix in the future. The only alternative will be to disengage completely and throw your attention into escapism, or at least away from politics and news. And if you don’t make the cultivation of mental well-being your first and foremost priority you will be forced, in a very unpleasant way, to disengage anyhow.

And honestly this is something all activist types should be doing anyway. Believing you can help the world without doing serious inner work is like believing you can clean the house while covered in raw sewage. You can always spot the political activists who engage without doing any inner work by the chaotic, unskillful and frequently counterproductive form their actions take. They can’t see clearly enough to operate efficaciously, because their vision is clouded with unresolved suffering and conflict. Get in the shower and wash the yuck off yourself before trying to clean the house.

Some of my readers want a Sanders insurgency in the Democratic Party, some support third parties or independents, while others eschew electoral politics altogether and endorse other approaches to pushing for real change. But in my experience you all care deeply about the world, regardless of your preferred path toward doing so, and that’s going to take a heavy toll as all manner of things unravel over the next year if you don’t have the psychological spaciousness to navigate it lucidly.

Above all, be gentle with yourself. We got a ways ahead of us, and we need you fresh and feeling good. You won’t be able to help wake the world up if you let the chaos and confusion drag you down. Know when to take a break from the information stream and all the babbling narratives trying to twist your perception of it. Use your tools to distance yourself from the narratives so that you can perceive them objectively. Ground yourself, find your center, then, when you’re ready, wade back in.

No matter how chaotic things get, your ability to navigate that chaos skillfully needs to be your first and foremost priority. Put your mental well-being first, and everything else will fall into place.

Be the peace and harmony you want to see in the world.

My work is entirely reader-supported, so if you enjoyed this piece please consider sharing it around, liking me on Facebook, following my antics on Twitter, checking out my podcast on either Youtube, soundcloud, Apple podcasts or Spotify, following me on Steemit, throwing some money into my hat on Patreon or Paypal, purchasing some of my sweet merchandise
Tags: US Democratic PartyUSAUSElection2020

0 thoughts on “2020 Is Going To Get Much Crazier. Prioritize Your Mental Health.”