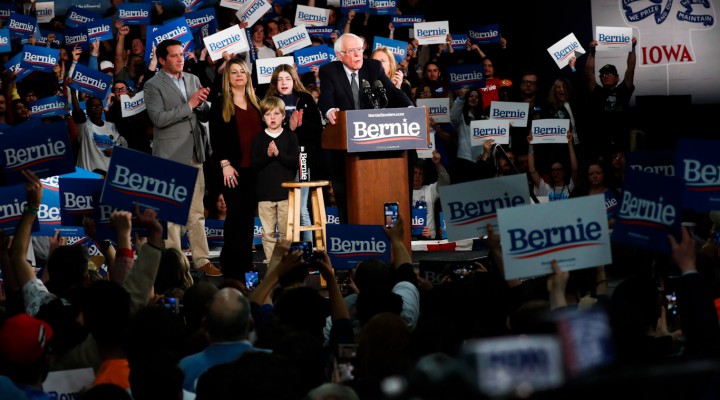 Many Americans are having a sense of deja vu following the Iowa caucus, which appears to be turning into a rerun of the DNC corruption seen during the 2016 campaign. Only this time, Buttigieg is standing in place of Clinton.

MPN– Two days after the caucus, the fiasco in Iowa continues. On Monday, Shadow, the app the Democratic Party was relying on to count votes, crashed, leaving all sides angry at the incompetence and the confusion it caused. Nevertheless, with no precincts reporting, South Bend Mayor Pete Buttigieg declared victory. Bernie Sanders’ team believed the Vermont senator held around a five-point lead over Buttigieg in the popular vote. However, two days later the two are neck-and-neck, with ten pledged delegates each, both receiving over a quarter of the vote share. Massachusetts senator Elizabeth Warren is the only other candidate to have captured any delegates at this moment, securing four. The biggest loser among the primary contenders appears to be former vice-president Joe Biden, who is in a clear fourth place, securing only 15 percent of the vote, and not enough for any delegates. Many of the most racially diverse counties have yet to declare.

Iowa Party Chairman Troy Price apologized to registered Democrats who flocked to more than 1,600 caucus sites across the state and as far afield as Paris, France and Glasgow, Scotland. “There was a coding error,” he claimed. But as more details emerge of close ties between Buttigieg’s team and the makers of the app responsible for the disaster, anger turned to suspicion. Records show that Buttigieg’s campaign has donated at least $42,500 to the makers of Shadow. Tara McGowan, the CEO of its parent company, is married to a senior Buttigieg strategist and openly celebrated the news that the South Bend mayor decided to run for president. Perhaps more ominously, a number of senior members of Shadow’s team, including the CEO, Gerard Niemira, COO James Hickey, CTO Krista Davis and Product Manager Ahna Rao ran Hillary Clinton’s 2016 primary bid.

In 2016, the Democratic National Congress (DNC) rigged the election in favor of Clinton, preventing Sanders from becoming the nominee. It argued in court that they were under no legal obligation to provide the public with a clean election and it was its right under the First Amendment to put its thumb on the scale for Clinton. Words like “impartial” and “evenhanded,” as used in the DNC charter, it said, could not be interpreted by a court of law. On Monday, MintPress also reported that the DNC had established an online “counter disinformation team” that claimed to be trying to prevent the spread of fake news. Any social media user employing the word “rigged” or variations of it would be highlighted by the DNC’s new software and targeted, it claimed.

Some Dems would rather have another Trump presidency than see Bernie in the White House pic.twitter.com/THpk2mQOBq

Many felt that the Iowa caucus was turning into a rerun of the corruption of the 2016 campaign, with Buttigieg standing in place of Clinton. On the app, political comedian Lee Camp claimed that it was designed to crash. “The Buttigieg campaign, the former Hillary machine, and the DNC, is all working together to undermine Bernie Sanders’ campaign in a million different ways, but what they’ve done in Iowa is beyond the pale,” he said. “They are doing everything to rig this against the one progressive candidate…in the top tier…What are we going to do when the exact same things happen this year that happened in 2016?”

Mike Figueredo of the Humanist Report described the events as a “shit show” and argued that the lack of transparency and the suspicion created by the events played into the current president’s hands, saying:

Voters do not come out to support Democrats if they do not believe in the process. This is why Democrats lose. This is why Donald Trump has a very good shot of getting re-elected. Because when voters stay home Republicans win. And nobody believes in the process, nobody thinks it is legitimate. The Democratic Party has done more than enough to delegitimize the process and we’re just getting started! This is the first primary of 49. What a fucking disaster of epic proportions! Again, we need the UN or some international entity to oversee our elections because nobody trusts the democratic process. Nobody!

It also transpired that the Buttigieg campaign managed to have the final Iowa poll suppressed. Former Green Party presidential candidate Jill Stein was far from impressed with the former Indiana mayor; “Pete Buttigieg is what neoliberalism looks like. He tells people to have high hopes & low expectations. Under the folksy Heartland mayor is an ambitious resume-padder. Behind the liberal rhetoric, he stands for the status quo. How can he win if Black voters see through the hype?” she wrote. Meanwhile, Iranian professor Mohammad Marandi made fun of the whole thing, calling for the removal of all corrupt DNC officials and “supporting popular calls” for Jill Stein to be appointed leader until free and fair elections, free of Irregularities, could be scheduled, using the rhetoric of the United States government with regard to adversarial states like Bolivia and Venezuela against America itself.

Iran is troubled by irregularities in the results of the #IowaCaucuses. We do not recognize the results, we demand the quick removal of all corrupt #DNC officials & we support popular calls for @DrJillStein to assume the party leadership until free & fare elections can be assured

Iowa is merely the first of the states to caucus in a four-month process leading up to the DNC convention in Milwaukee, WI in July. But if there are dozens of other debacles that raise as much suspicion of corruption like this one, it is doubtful that the party will survive intact until then.