HOME / WORLD / West Pressures Thailand to Take Their Side Against Russia 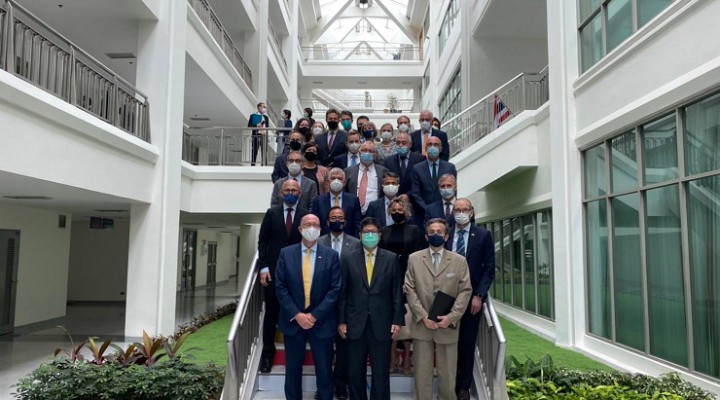 On February 28, 2022 the EU ambassador to Thailand, David Daly, would declare in a social media post that Thailand “should speak up to save our rules based international order,” demanding the Kingdom of Thailand vote at the UN with the West regarding Ukraine.

Accompanying his comments were the flags of the United States, the UK, France, Germany, and Canada among others who visited Thailand’s Ministry of Foreign Affairs to lecture Thailand over what its reaction to the growing crisis should be.

A Bangkok Post article titled, “Neutral on Russia-Ukraine: PM,” would note, however, that Thailand would remain neutral. The article reported:

Prime Minister Prayut Chan-o-cha has insisted Thailand will maintain its neutrality in the Russia-Ukraine conflict, a government source said.

Speaking after the cabinet meeting, Gen Prayut [Chan-o-cha] said Thailand will adhere to Asean’s stance on the conflict between Russia and Ukraine as the grouping has called for dialogue among parties concerned to resolve the Ukraine crisis.

Thailand’s relationship with Russia, like many Southeast Asian countries, is also close and long-standing. The Russian Federation represents for the region a reliable counter-balance to Western influence and interference.

Conversely, ties with the West have frayed particularly with the United States who for years now funded and encouraged violent protesters in their bid to overthrow the current China (and also Russia) friendly government from power and replace it with leadership backed by and working for Washington, London, and Brussels.

These same representatives recently lecturing Thailand on its stance regarding Russia and Ukraine have regularly injected themselves into the internal political affairs of Thailand, meeting with opposition leaders, accompanying them to police stations, and regularly condemning the Thai government for policing the often violent protests the Western-backed opposition organizes in Bangkok’s streets.

Foreign Minister Don Pramudwinai has accused foreign envoys of breaching diplomatic protocol and intervening in the justice system by being present when Future Forward Party leader Thanathorn Juangroongruangkit reported to Pathumwan police on a sedition charge.

“That could not happen in their own countries, but they did it in our country. We will ask them to cooperate and not to do that again. It was against the diplomatic protocols of the United Nations,” Mr Don said at Government House on Tuesday

These same representatives blatantly violating Thailand’s sovereignty and interfering in the nation’s internal political affairs in recent years, now want to recruit Thailand to support them and their efforts to do likewise – undermine peace, stability, and sovereignty – in Eastern Europe.

This includes Prachatai, funded by the US government through the National Endowment for Democracy (NED) and whose director is an NED fellow. Prachatai has published multiple articles promoting recent anti-Russian protests carried out by US-backed opposition groups and Ukrainian expatriates.

However, the Western-backed opposition in Thailand has made itself incredibly unpopular, particularly from 2019 onward. The fact that the Thai opposition is compromised by its Western backers and financiers is widely known among politically-conscious Thais and the reality behind Ukraine-Russian tensions is openly discussed from a Russian point of view among at least some prominent Thai media platforms.

While US-funded and influenced media will parrot Western talking points regarding Russia, much of Thailand’s media will remain neutral with at least some prominent media platforms presenting the conflict from Russia’s points of view. This includes a recent interview by Thai journalist Suthichai Yoon of Russian Ambassador to Thailand Evgeny Tomikhin.

Thailand’s political and information space could have been more favorably positioned ahead of the current conflict to protect Thai neutrality from Western pressure but for the time being, the hysteria sweeping the West has so far not made any significant inroads in Thailand.

Meddling Foreigner Expelled from Thailand: The Rest of the Story

Thai-Saudi Relations Improve: Why and What’s Next?

The Reason People Want Amnesty International Kicked Out of Thailand

Are Thailand’s Protesters Fighting For or Against the Kingdom?