HOME / WORLD / How & Why are Thai-Saudi Relations Improving? 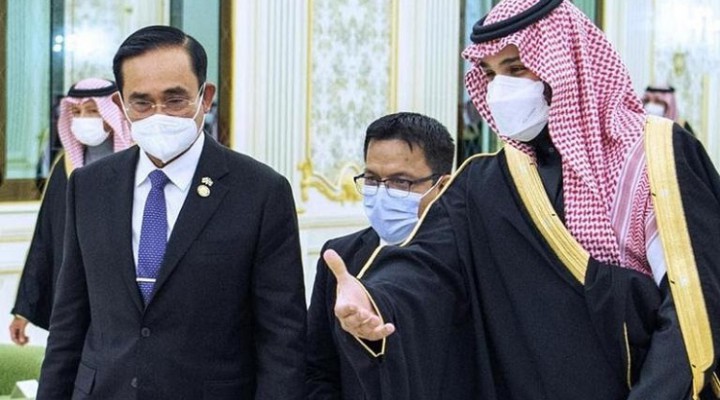 For three decades Thai-Saudi relations had suffered over a diplomatic row involving stolen Saudi jewelry and the unsolved murders of several Saudi diplomats in Thailand.

In 1989, Thailand-born janitor Kriangkrai Techamong stole $20m worth of precious gems from the home of a Saudi prince, triggering a spate of murders in Bangkok and a feud between the countries dubbed the Blue Diamond Affair.

The crimes remain unsolved to this day, but Saudi Arabia has nonetheless decided to move forward together with Thailand to repair relations and begin moving forward together in terms of labor, tourism, and trade agreements that will benefit both nations.

In terms of trade, Saudi Arabia accounts for very few Thai exports, and trails behind India, accounting for only about 2% of all imports brought into the Kingdom of Thailand. Compare this with Thailand’s largest trade partners, China, where 12.95% of its exports go and from which 22.81% of its imports come as of 2019. But an improve in relations could potentially help change that, helping further diversify Thai imports and exports and provide Saudi Arabia an opportunity to diversify away from its dependence on the United States and Western Europe.

A Captive Kingdom Finding an Escape

There had been speculation that Thailand and Saudi Arabia’s collective decision to repair ties indicated Thailand’s desire to balance its growing ties with China with the improvement of ties with a nation perceived as a close ally of the United States. However, it is very likely this indicates precisely the opposite.

Saudi Arabia’s overdependence on the United States geopolitically has cost the kingdom greatly in recent years. The highly destructive war Riyadh is fighting neighboring Yemen, declared the worst humanitarian crisis on Earth by the United Nations, has stretched the Saudi military, undermined Saudi Arabia’s national security, strained relations with its regional allies, and has further heightened tensions with regional adversaries including Iran.

While the war against Yemen is considered by many a “Saudi” endeavor, the Western media itself has explained how the war is all but being fought by the United States itself, through Saudi Arabia, and for primarily US interests, not Saudi Arabia’s.

The New York Times in an article titled, “Arms Sales to Saudis Leave American Fingerprints on Yemen’s Carnage,” would note:

When a Saudi F-15 warplane takes off from King Khalid air base in southern Saudi Arabia for a bombing run over Yemen, it is not just the plane and the bombs that are American.

American mechanics service the jet and carry out repairs on the ground. American technicians upgrade the targeting software and other classified technology, which Saudis are not allowed to touch. The pilot has likely been trained by the United States Air Force.

And at a flight operations room in the capital, Riyadh, Saudi commanders sit near American military officials who provide intelligence and tactical advice, mainly aimed at stopping the Saudis from killing Yemeni civilians.

While the New York Times attempts to depict US involvement as reluctant aid offered to a valued ally, it is very clear that much of Saudi Arabia’s foreign policy is decided by Washington and for Washington’s best interests – not Riyadh’s.

The same could be said of Saudi Arabia’s involvement in Syria, Iraq, and America’s ongoing tensions with Iran. Saudi foreign policy has left the region destabilized and undoubtedly affecting Saudi economic, social, and political stability in turn.

With the US fading as a global power and its military impotency on display even in nations US troops continue occupying – including Iraq and Syria – Saudi Arabia finds itself engaged in endless conflict, destabilizing the region it is located in, and denying itself opportunities for the sake of its Washington allies who are in no position to protect Saudi Arabia or reward it for its obedience. And as a consequence of this increasingly obvious reality, Saudi Arabia has begun repairing its relations with many nations in the region, including even Iran.

DW in its 2021 article, “Why Saudi-Iran relations are thawing — for now,” would report:

So far this year, regional archrivals Saudi Arabia and Iran have met more times than in the previous five years altogether.

The four meetings in Baghdad, and one on the sidelines of the UN General Assembly in New York, indicate continuity in the warming of bilateral relations that had been frozen since 2016.

Improved ties between Saudi Arabia and Iran would solve a multitude of problems for both nations and without fear of US reprisals, could together move the entire region toward a period of unprecedented peace and prosperity. Together with a rising China – the region could be transformed from one known around the world as an epicenter of conflict, to a bridge between Asia to the east and Europe and Africa to the west.

A Saudi Arabia repairing ties with Iran in the region, and nations like Thailand in Asia, indicates a nation and even a region thinking ahead of a future without the US imposing itself as a regional and even global hegemon.

There is a certain irony of a United States posing as “leader” of its self-proclaimed “international rules-based order” claiming that it underwrites peace and stability around the globe – but as it fades from this self-appointed role – actual peace and prosperity fills the war-torn vacuum left behind.

It is still too early to tell whether Saudi Arabia’s attempts to diversify away from a US-centric foreign policy toward a more beneficial approach for Saudi Arabia itself is a permanent process that will continue into the future or a process that may be checked by Washington in an attempt to reassert itself over “allies” eager for exits, but it is nonetheless an indicator of how much and how quickly the world is changing as multipolarism emerges and the West’s unipolar grip over the planet loosens.

Thai-Saudi Relations Improve: Why and What’s Next?

0 thoughts on “How & Why are Thai-Saudi Relations Improving?”