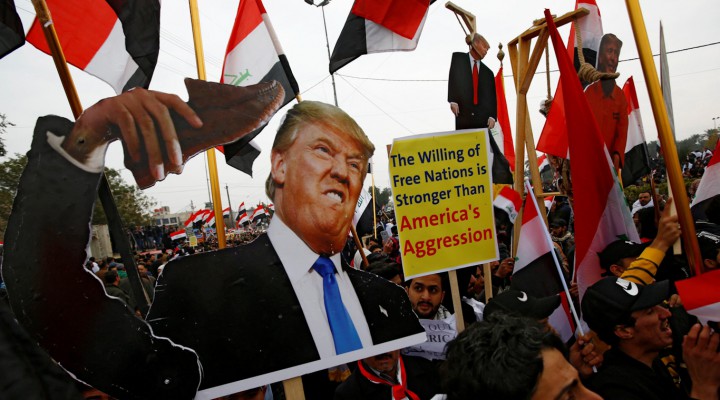 An estimated 2.5 million Iraqis descended on Baghdad to stage a “Million Man March” calling for an end to the nearly 17 year-long U.S. occupation of their country.

MPN– People from all over Iraq have descended upon its capital Baghdad, heeding the call from influential Shia cleric Muqtada al-Sadr for a “million man march” calling for an end to the nearly 17 year-long U.S. occupation of the country. Images from the event show seas of peaceful crowds walking together through the city center. Sayed Sadiq al-Hashemi, the director of the Iraqi Center for Studies, estimated that more than 2.5 million took part in the demonstrations. While there are many divisions in Iraqi society, marchers hope to send a united message against American imperialism.

“Pompeo keeps going on about respecting Iraqi sovereignty. Well Iraqis want you out of their country,” said Lebanese-American journalist Rania Khalek, adding that the recent U.S. assassination of Major General Qassem Soleimani of the Iranian Revolutionary Guard Corps (IRGC) has seriously backfired, leading to a huge show of anti-American sentiment. She also took aim at the media coverage; “Whenever a couple hundred people protest against Iran, it trends on twitter. Yet when hundreds of thousands in Iraq protest against the US? No trending,” she said.

Khalek’s words were prophetic. The march has already concluded, yet coverage in Western media has been sparse, to say the least. A search for “Iraq” into the Google News search engine at 16:00 GMT Friday elicited just two articles in the Western press. Meanwhile, Bloomberg’s Quick Take released a since-corrected video, incorrectly describing the mass protests as merely “anti-government demonstrations.”

The message of the million man march was impossible to miss: the main stage of the event featured a huge banner with the words “GET OUT AMERICA” printed in giant upper case English letters, while protesters carried signs that featured slogans like “Americans elect moron criminals & the rest of the world suffers destruction,” “Trump is destroying America and the world,” and, perhaps most ominously, “You arrived vertically but will leave horizontally.”

The most comprehensive English language coverage by far was, ironically, from Iranian-government owned channel Press TV, who had live video feeds of the events with round-the-clock coverage and commentary in English. Ironic because last week Google deleted Press TV from its platforms, including YouTube, making it far harder for Western audiences to access it. The media attack on the public’s ability to hear alternative opinions continued as Facebook announced that, because of U.S. sanctions, it was legally compelled to remove all content that contradicted the Trump administration’s position on Soleimani’s assassination or shared an Iranian government perspective. “We operate under U.S. sanctions laws, including those related to the U.S. government’s designation of the IRGC and its leadership,” a Facebook spokesperson said. This is particularly problematic as Soleimani was, according to American surveys, “the most popular Iranian public figure” with over 80 percent of the country having a positive or very positive opinion of him. This effectively means that the Trump administration has control over the opinions that the world – and Iranians themselves – see on social media.

Although Soleimani’s assassination on January 3 sparked outrage in Iran, it was also deeply unpopular with Iraqis, who saw it as the latest example of the contempt the U.S. has for their country’s sovereignty. Little known outside the region is that the Soleimani had traveled to Baghdad for peace talks with Saudi Arabia at the behest of Iraqi Prime Minister Adil Abdul-Mahdi. Abdul-Mahdi specifically asked Trump for permission to invite him to his country. Trump acquiesced, then used the opportunity to kill him.

Truly is remarkable, more than million Iraqi across the nation gathered together to rise against the US and Zionist regime. This is the real voice of the nation who support #resistance against the enemy’s aggression. #ابو_مهدي_المهندس #العراق #iraq #IraqMillionManMarch pic.twitter.com/hCaf3sbUDo

In response, the Iraqi parliament passed a unanimous resolution on January 5 (with many abstentions), calling for the expulsion of all U.S. troops. There are currently an estimated 5,000 American soldiers in Iraq, plus large numbers of mercenary contractors.

The Trump administration, however, has flatly refused to leave. In fact, it is greatly increasing the number of military personnel in the country as it prepares for a possible attack on Iran. “At this time, any delegation sent to Iraq would be dedicated to discussing how to best recommit to our strategic partnership — not to discuss troop withdrawal, but our right, appropriate force posture in the Middle East,” said State Department spokesperson Morgan Ortagus. Donald Trump was even more imperious, threatening the entire country with “very big sanctions” as a punishment for telling America to leave.

Iraqis know the consequences of sanctions. American engineered sanctions killed over one million Iraqis during the 1990s, including half a million children, as the country literally starved to death under the economic blockade. The sanctions were labeled “genocidal” by successive U.N. diplomats who were charged with overseeing them. At the time, Secretary of State Madeline Albright brushed off the deaths, stating that they were a price worth paying. As a result of the millions of deaths caused by the sanctions and the 2003 invasion and occupation, the country has an unusually young population: the median age of an Iraqi is just 20 (in the U.S. it is 38). Therefore, most Iraqis have never seen their country free of American troops.

Feature photo | Demonstrators carry placards depicting U.S. President Donald Trump at a protest against the presence of US troops in Iraq on Jan. 24, 2020. Ala’a Al-Marjani | Reuters