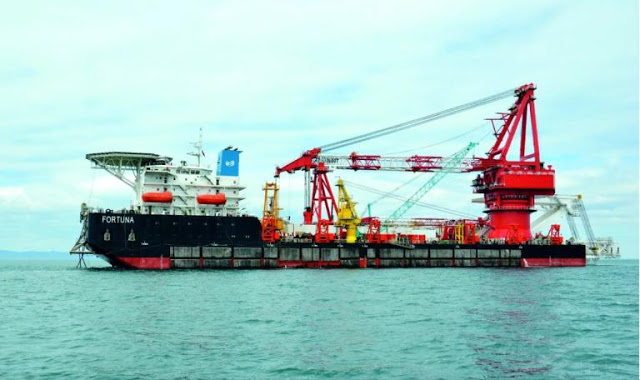 Despite the partisan political theater taking place in Washington – in terms of foreign policy – virtually nothing has changed with a new US president taking office. Even the rhetoric of the new administration is hardly discernible from that of its predecessor.

From US tensions with China and Iran to continued pressure on Russia – the US continues to pursue a singularly belligerent foreign policy as part of a continued effort to maintain a US-led “international order” and to reassert US hegemony everywhere on Earth it is challenged.

This includes in Western Europe where circles of political and economic interests have begun to stray from and even run contra to US interests.

The best example of this is Germany’s participation in the Nord Stream 2 pipeline project – a joint effort between Russia and Germany to expand the flow of hydrocarbons directly into Western Europe – bypassing potential regions of instability in Eastern Europe targeted by the US specifically to impede Russian-European cooperation.

The new US Secretary of State Antony Blinken during his confirmation hearing before the US Senate found himself in almost unanimous agreement with US Senators – Republican or Democrat – on the necessity to maintain or even expand US belligerence worldwide.

Regarding Nord Stream 2 in particular, when asked by US Senator Ted Cruz about the new administration’s commitment to blocking the Russian-German pipeline, Blinken would respond:

[The] president-elect strongly agrees with you that Nord Stream 2 is a bad idea. He’s been very clear about that.

I’m determined to do whatever we can  to prevent that completion the last hundred yards [of the pipeline]. I very much agree.

When asked if the new administration would “stand up to German pressure” against stopping the project, Blinken would respond:

I can tell you I know that [Biden] would have us use  every persuasive tool that we have to convince our friends and partners including Germany not to move forward with it.

According to Senator Cruz’ own official US Senate website he would describe Nord Stream 2 as:

Yet, if any of that was actually true, why would Germany agree to participate in the project in the first place? Why would Germany voluntarily sign up for “economic blackmail” by Russia or deliberately endanger its own “energy security?”

How is the US in a better position to assess and respond to threats to European energy security better than Europe itself can? And is the fact that the US seeks to sell Europe its own “freedom gas” not an immense, glaring conflict of interests?

US Freeing Europe From Freedom to Choose

As the US regularly does – it creates a rhetorical smokescreen behind which it advances its agenda – oftentimes an agenda that stands in direct contradiction to its rhetorical arguments – with its policy toward blocking Nord Stream 2 no exception.

Thus the “energy security” offered to Europe by the US as an alternative to well-established flow of Russian hydrocarbons faces opposition politically, environmentally, and even economically.

It is the threat of sanctions and pressure from the US that forms a very real example of “economic blackmail.”

In fact – the only truthful component of Washington’s objections to Nord Stream 2’s completion is that it threatens “America’s national security interests.” But these are not to be confused with the actual defense of the United States – but rather the defense of America’s power and influence abroad – power and influence that is both unwarranted and increasingly unwelcome.

The article would note:

Earlier this month, the state government of Mecklenburg-Western Pomerania established a public foundation that could take over potentially sanctionable activity because the foundation “does not have to fear sanctions,” a spokesperson for the state’s Energy Ministry told DW.

“The foundation could offer the possibility of acquiring necessary parts and machinery for pipeline construction and, as necessary, make them available to the participating companies,” the spokesperson, Renate Gundlach, said in a statement. “The goal is to secure these highly specialized items, which only a few companies in the world produce before they would be potentially no longer available to acquire because of sanctions.”

Because US sanctions are only – at the moment – targeting German companies and not the German government itself – the creation of a foundation to protect private companies targeted by sanctions would allow companies to side-step US sanctions.

In order to counter this, the US would be forced to target the German government directly – a move that would reek of desperation, weakness, and likely prompt a continued, irreversible deterioration in ties between the US and Europe. And while we were told that previously strained US-European ties were the result of the “Trump administration,” this escalation would need to take place under the newly inaugurated Biden administration.

This would finally lay to rest the notions of agency in Washington and fully reveal US foreign policy as driven by large corporate-financier interests – including those seeking to cash in on selling Europe American-made “freedom gas.”

The US has for years portrayed nations like Russia, China, Iran, and others as rogue nations – justifying everything from economic sanctions and political pressure, to proxy warfare and threats of total war. However, it seems that now even Europe is finding itself on the receiving end of US “soft” and now “hard” power – revealing the US and its exceptionalism as the problem – not the growing list of nations refusing to submit to its agenda and “follow” as it “leads.”

Ironically, in addition to the Nord Stream 2 pipeline itself – America’s increased belligerence against both Russia and Germany has provided Moscow and its Western European neighbors more common ground to work on – circumventing US sanctions.

0 thoughts on “US Continues Crusade Against Nord Stream 2”