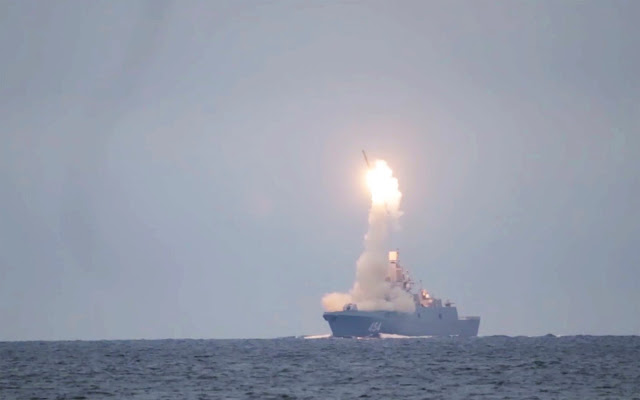 Russian state media reported a successful test flight of its new hypersonic missile, the Zircon. Flying at Mach 8 (8 times the speed of sound or around 10,000 kph), the missile poses a new and credible threat to the air defense systems of potential aggressors.

This would mean that missiles fired from the Mediterranean Sea, for example, could hit virtually any target amid the ongoing Syrian conflict, both within Syria but also in neighboring nations backing militants fighting against the Syrian government and its Russian allies.

Is the West Downplaying ‘Zircon’s’ Capabilities to Hide Fears?

The Western media has reported on Russia’s hypersonic missiles for a while. And now that the first Zircon missiles have taken flight in reportedly successful tests – speculation among the West as well as an attempt to downplay Russia’s technological achievement is in full motion.

Despite headlines to the contrary, not enough about the missile is known yet to definitely claim that it poses an uncounterable threats to ships at sea.

The article continues by noting that speed alone is not necessarily an undefeatable trait of the Zircon missile and that an ability to maneuver – particularly end-game maneuverability right before hitting a target – would make it a truly credible and nearly unstoppable threat to the fleets of aggressor nations.

Then there is Military.com’s article, “Why Russia’s Hypersonic Missiles Can’t Be Seen on Radar,” which notes (emphasis added):

The missile flies with an advanced fuel that the Russians say gives it a range of up to 1,000 kilometers. And it’s so fast that the air pressure in front of the weapon forms a plasma cloud as it moves, absorbing radio waves and making it practically invisible to active radar systems.

U.S. Aegis missile interceptor systems require 8-10 seconds of reaction time to intercept incoming attacks. In those 8-10 seconds, the Russian Zircon missiles will already have traveled 20 kilometers, and the interceptor missiles do not fly fast enough to catch up.

The only hope to stopping an incoming Zircon missile – or any hypersonic missile for that matter – would be to detect it early enough and be able to react fast enough to throw up defenses in its flight path. Barring its ability to maneuver at the last moment to evade these defenses – there is the possibility of intercepting them.

But that’s if just one, or a few missiles are launched. Even a full-fledged US carrier strike group would be able to shoot down only so many of these missiles at one given time.

The footage made available of the Zircon’s recent test flight shows it deploying from one of several vertical launch tubes meaning that in the future – multiple missiles will be aboard any given Russian military vessel – meaning that several vessels can launch several missiles at any given time.

With the possibility of altering their flight paths accordingly – large numbers of missiles could reach a potential target or targets simultaneously and from multiple angles, overwhelming even the best air defenses in a process known as saturation.

This means that should enough of these missiles make it into service with Russia’s naval forces and  should the need arise to use them – large numbers can be used to overwhelm air defense systems even if they are tuned specifically to counter hypersonic weapons like the Zircon missile.

Not only does the development and deployment among Russia’s fleet of Zircon hypersonic missiles give Russia yet another conventional weapon serving as a deterrence against Western aggression, the prospect of these weapons being sold to allies would extend a credible deterrence well beyond Russia’s borders and shores as well.

In fact, US-based think-tank – RAND Corporation – detailed the threat proliferation poses to US military aggression around the globe in a lengthy policy paper titled, “Hypersonic Missile Nonproliferation: Hindering the Spread of a New Class of Weapons.”

The paper notes that:

And this “threat” to the “forward-projected forces” of “major powers” – referring almost exclusively to the United States and is multiple, ongoing campaigns of military aggression, occupation, and intervention around the globe – is what the US fears the most.

It is a non-nuclear military deterrence capable of sinking a US fleet or demolishing a US military base built illegally in an occupied nation, and one the US has very few means to defend against. There is also no real pretext to oppose a nation of developing or acquiring such weapons either, besides the ability of hypersonic missiles to thwart otherwise illegal military aggression carried out by the US. It would be a very difficult case to make and produce policy very difficult to sell to the international community.

For the US itself – a nation surrounded by two vast oceans – the Atlantic and Pacific – the prospect of hypersonic missiles posing a threat to its actual territory is minimum. It is its illegally deployed military forces engaged in likewise illegal military aggression around the globe that are most at risk.

The RAND Corporation’s paper advocating for moves to limit the proliferation of hypersonic missiles is already an uphill battle. While not hypersonic, the incredibly fast and advanced BrahMos cruise missile – jointly developed by Russia and India – is set to be further developed into a hypersonic missile in the near future.

This technology will undoubtedly be proliferated by nations like Russia and China specifically because of the check and balance it serves against US military aggression around the globe – a non-nuclear alternative that raises the stakes and price for US military aggression, thus leaving policymakers in Washington and their sponsors on Wall Street with more constructive competition and collaboration as as their only alternatives.

In many ways, Russia’s hypersonic missile – the Zircon – is not just a technological achievement or a newly acquired and formidable military capability – it is also a useful component of a much wider diplomatic effort to shift the world from the Western-dominated unipolar “rules-based international order” – one underwritten by Western military aggression – and toward multipolarism where the cost of conflict is higher than the cost of fair competition and cooperation.