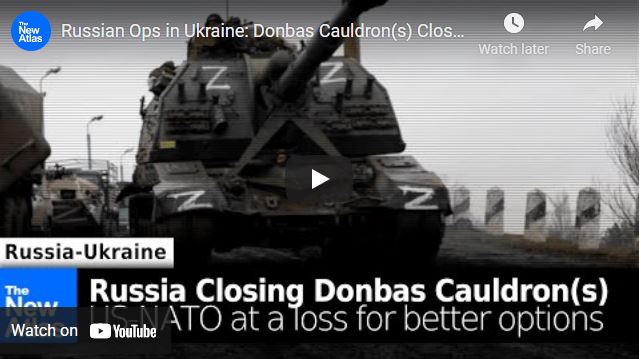 – Russian forces continue encirclement and elimination of Ukrainian forces in the Severodonetsk-Lysychansk cauldron;
– During encirclements in Syria, similar “offensives” were attempted as acts of desperation;
– Claims of Ukrainian “counter-offensives” are a distraction from the overall, imminent strategic defeat these forces face in the cauldron;
– Other “offensives” near Kherson and outside of Kharkov have failed to make any strategic gains and represent political distractions for Ukraine’s strategic defeat;
– HIMARS, additional artillery systems, drones, and other heavy weapons will not change the tide of the conflict
– Russia is winning because of air power, air defenses, logistics, advantages in correlation of forces;
– Western media continues to pivot from “Ukrainian victory” to a more sober realization of Ukrainian losses and its bleak outlook for the future.

Guardian – Ukraine forces ‘recapture 20% of territory lost in Sievierodonetsk’ – as it happened:
https://www.theguardian.com/world/liv…

Guardian – Himars: what are the advanced rockets US is sending Ukraine?:
https://www.theguardian.com/world/202…

The National Interest – Turkey’s Leopard 2 Tanks Are Getting Crushed in Syria:
https://nationalinterest.org/blog/buz…

US Department of Defense – Dr. Colin Kahl, Under Secretary of Defense for Policy, Holds a Press Briefing (June 1):
https://www.defense.gov/News/Transcri…

Guardian – Russia is winning the economic war – and Putin is no closer to withdrawing troops:
https://www.theguardian.com/commentis…