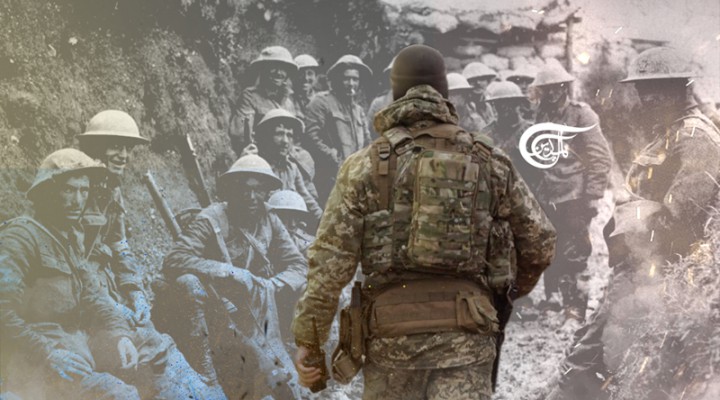 While the West thinks the Ukraine crisis is unfolding into something similar to the cold war, historical and material circumstances say otherwise: The world is on the brink of an event on the magnitude of WWI.

The commonplace narrative is that the West has entered into a Cold War similar to that conducted against the Soviet Union; and that, as with that earlier struggle, its end-outcome must be the primordial reaffirmation of the American economic, political and civilisational model.

A far better analogy however, would be to consider an earlier era that ended not with a Cold War triumph, but rather, with a hot war tsunami that disembogued across the globe.  It was a period when policy-makers (and markets) famously failed to appreciate the rising danger that was accreting during the sleepy-summer hiatus that elapsed between the assassination of Archduke Franz Ferdinand in late June 1914, and the outbreak of war, five weeks later.

True, there was a sense then that two heavily-armed alliances were on a potential collision course. But, there had been episodes of sabre-rattling before, and it was the failure of these episodes to come to a head that induced a sense that the status quo could – and would – extend indefinitely. Opinion then had been influenced by Norman Angell’s 1909 best-seller, The Great Illusion, arguing that war had become impossible because global trade and capital flows were too closely interlinked.

What was not fully appreciated at that earlier moment was that Britain had been stealthily eyeing with indignant anger the looming threat to its Empire from German’s nascent ambition to acquire its own rival empire.  Britain had been preparing to gouge out this German ‘chutzpah’ for some time. The  1899–1902 Boer War principally was about Britain acquiring the financial riches of South Africa in order to finance rearmament.

The circumstances of mid-1914 (the Sarajevo moment) seemed so propitious, both for Germany to aspire to empire and for Britain to believe that this was the opportunity to quash it utterly.  Just as Ukraine today is seen by Moscow as the hinge to a different world architecture, Washington sees a Ukraine quagmire as serendipitous to its desire to crush Russian and Chinese aspirations now threatening to dislodge America’s ‘rules-based’ empire.

The Ukraine conflict, now hanging poised at a pivot towards an increasingly likely Russian victory, is metaphorically speaking today’s ‘Sarajevo moment’. We are captured in the interregnum of illusion as complacent Euro-leaders have gambled that Biden must surely win, and ‘normality’ be restored.

Recall that Britain launched its operation to cut Germany down to size in the early twentieth century by attempting to rip-apart global supply lines – to preserve its own – and to deny Germany access to its external links. As part of this, Britain mounted  a naval blockade which had the unintended effect of channeling resurgent German ambitions eastwards — across the plain of Europe, and ultimately, to a drive on Russia.

We all know that this concatenation of events ended in two World Wars, and the subsequent economic devastation of Europe, that paved the way for the American Century.

How to explain Europe’s contemporary second bout of political-élite somnolence and insouciance in a hundred years?  Well, Britain’s tool for preparing the battlespace against Germany a century past was old-fashioned diplomacy. Britain engineered a diplomatic alliance versus Germany.  But the US has brought a new tool to preparing the European battlespace: their inversion of Antonio Gramsci’s thesis that the cultural sphere is the most productive arena of political struggle.

Thus, instead of culture being the site of revolutionary action against an élite (per Gramsci), US and European social-platforms and MSM, cleansed of non-western rivals, have become precisely the site where the ‘system’ – the élite –  can reassert itself, neutering the possibility of political resistance by dominating the cultural sphere: Big-platform algorithmic and MSM demonisation of China and Russia.

These can be the means by which a largely war-adverse Europe can be turned against China and Russia, with Euro-élites drowsing-on, in the name of advancing their ‘universal’ liberal values.

What is different today is also the most troubling. The original hypothesis seems to have been that using the US’ financial and trade muscle – whilst America still predominates – to collapse Russia’s economy, to contain China, and arm-twist Europe into tech vassalage – would be in itself, enough to contain the risk of hot war.

But the reverse is happening. The embarrassing failure of the financial war has forced Biden into a blunderbuss blast of distractions to cover for this failure – one that has not just failed to bring down Russia, but now risks collapsing the European economy, thus posing great collateral risk to the US financial system itself.

So, here we have Biden saying the US will intervene in Taiwan, should China attack it, thereby locking tight the China-Russia Axis. In Ukraine, the US and NATO skirt ever closer to a direct clash with Russian military forces. Around Ukraine, the CIA is lighting a series of bushfires dotting the Ukrainian periphery: from Moldavia–all the way round to Kazakhstan (igniting old tensions). Biden is either turning a blind-eye to Poland’s attempt at soft-annexation of its legacy territorial claims in West Ukraine or is conniving at it (which threatens to open a multitude of ancient East European bleeding wounds).

In East Asia, the US has lit fires under Pakistan; is attempting to do so in Afghanistan; and with the Kurds – and more significantly, it is exercising jointly with Israel to practice a joint military attack on Iran.

And the Biden Administration has been facilitating – as Europe watches with growing disquiet – a Germany starting on yet another attempt at transition – one that chimes with the earlier ‘Greater Germany’ aspirations precisely harking back to the pre-World War I European setting – with its élites once again, targeting Russia. A comprehensive militarisation of German society is, once again, under way. Already, Germany and the US work closely together on Ukraine, and on NATO moves against Russia.

The gravity of this shift can be grasped in what otherwise might seem an esoteric footnote to a diplomatic statement; It is, in fact, anything but. In the September 2020 Russian-Chinese joint statement, a key vector dealt with the ‘historic truth’ about WWII. Simply put, the two States argue that in a seemingly innocuous western campaign, the facts of history are being systematically falsified (in countries such as Poland and the Baltic states), often with the subtle encouragement of the US. The narrative is metamorphosing to cast WWII as one in which the ‘European Family’ came together to fight Russia.

The aim is clear.  Its import (a dominant militarised Germany) is explosive for Europe.  (Is that Washington’s secondary objective?)  What seems so perverse is that all this playing with fire supposedly will help Biden not lose too badly in the November midterms.

Pyromania in support of a lost cause?

Disquiet at Davos and the Unsaid Fear of Failure – The First Shoots of a U.S. Ukraine Shift