HOME / WORLD / Opposition or Terrorists: Who is Syria and Russia Bombing in Idlib? 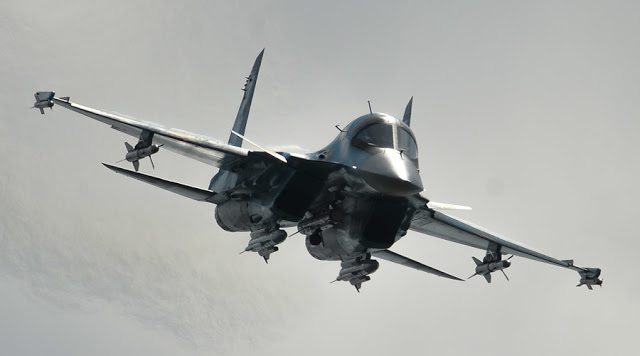 Scott Lucas – a professor at the University of Birmingham UK – would decry with the rest of the Western media – resumed joint military operations carried out by Syria and Russia in and around the northwestern governorate of Idlib.

Reuters in their article, “Syrian army resumes military operations against rebels in northwest Syria,” would claim:

The Syrian army said on Monday it was resuming military operations in a Russian-led campaign in northwest Syria that has uprooted tens of thousands and killed hundreds, blaming Turkey for not abiding by its commitments under a truce deal.

Both Lucas and Reuters – like many other Western media fronts and personalities – are careful never to fully characterize who the “opposition” actually consists of – instead attempting to imply Syria and Russia are waging war on civilians and “moderate rebels.”

When asked by journalist Peter Hitchens to give a run down on who the Syrian opposition actually was, Lucas in a post on social media would respond:

Hi, Peter! #Syria situation, across not only northwest but northeast, is web of local councils, local military groups, and local activist organizations to provide services. You’ll need to specify a particular area, such as a town or city in #Idlib or #Hama Province.

Yet the accompanying picture Lucas used to illustrate his point was of a meeting organized by the IHH (Foundation for Human Rights and Freedoms and Humanitarian Relief). IHH is based in Turkey and is by no means “local.” 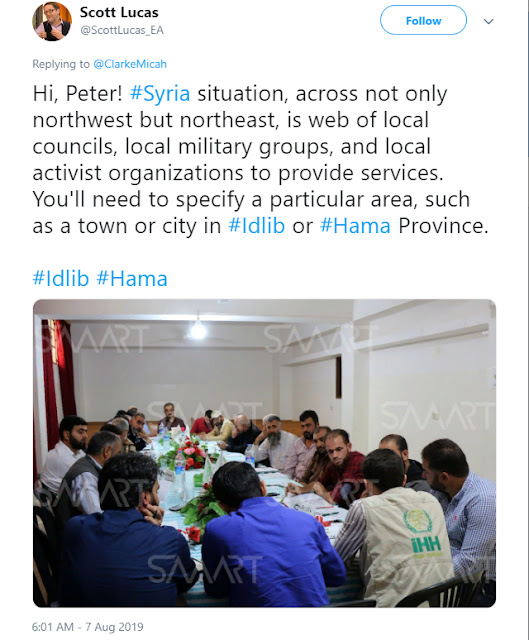 IHH is also linked directly to Al Qaeda, serving as a logistical support network for the terrorist organization, merely couching itself behind its humanitarian mission statement.

IHH’s ties to terrorism are not recent. A 2012 article by Israeli media outlet Ynet titled, “Report: IHH financially linked to al-Qaeda,” would report:

IHH director Bulent Yildirim is reportedly being investigated by Turkish authorities for allegedly creating a financial partnership with the infamous terror group.

Turkey’s Hurriyet Daily reported Friday that Yildirim has allegedly been transferring funds to al-Qaeda through his organization.

The Israeli-based International Institute for Counter-Terrorism (ICT) in a much more recent report titled, “IHH: The Nonprofit Face of Jihadism. An In-Depth Review,” would admit:

IHH (The Foundation for Human Rights and Freedoms and Humanitarian Relief) is a Turkish NGO active in 135 countries and seemingly dedicated entirely to humanitarian aims. In fact, mounting evidence suggests that IHH also operates as a hidden arm of the Turkish government in the conflict zones of the Middle East and Southeast Asia. It has been designated as a terrorist organization by Israel since 2012 and has been investigated by European prosecutors as a key logistical supporter of Al Qaeda.

It is a particular irony that Israeli media and policy institutions have helped expose IHH when many elements of the current Israeli government have been involved in backing terrorist organizations in neighboring Syria alongside Turkey, the United States, other Western states, as well as several Persian Gulf autocracies since the conflict began in 2011.

That the one picture Lucas was able to find where the “opposition” wasn’t overtly exposing itself as armed terrorists still depicted a known, verified foreign terrorist organization operating within Syrian territory – masquerading as humanitarians – speaks to just how deeply rooted terrorists are in Syria’s Idlib governorate.

Were the situation reversed and the West was faced with an entire province or state occupied by Al Qaeda and its myriad of affiliates – total war would commence and would not end until the targeted region was purged entirely of militants. Civilian causalities would either go uncounted and under-reported, or spun as a necessity in confronting an otherwise intolerable bastion of armed terrorism.

In fact – similar narratives were used during the US wars in Iraq and Afghanistan despite Washington’s objectives being geopolitical rather than counter-terrorism related.

The strategic reality is that despite how well Damascus and its allies have weathered and overcome Washington’s proxy war in Syria – the US remains a potent military, political, and economic threat. Strategic patience, multiple “truce deals,” and geopolitical concessions will be required to finally wrest Idlib back from foreign-backed terrorist forces currently entrenched there.

Terrorist forces have been concentrated in Idlib as Syrian forces pushed them out of virtually every other populated region of the country. Even the liberation of the City of Aleppo took years to achieve. Idlib is an entire governorate bordering Turkey which is still arming and protecting terrorist organizations both within Turkish territory itself and in Syrian territory occupied by Turkish forces.

While Turkey has recently shown signs of shifting objectives and moving closer to Russia geopolitically – it will be a long and agonizing process to undo the tensions this 8-year conflict has created.

If there is one point of hope amid this still dangerous and deadly conflict – it’s that the Western media and inveterate war propagandists like Scott Lucas are no longer able to conceal the true nature of terrorists they have aided and abetted since 2011.

They will continue trying nonetheless – but as Lucas just managed to do – will succeed only in exposing more of the network the US and its allies used in their proxy war against Damascus – thus further undermining regime change efforts in Syria and complicating similar attempts to target and overthrow other nations in the future.

US Propaganda Blitz Ahead of Idlib’s Liberation

0 thoughts on “Opposition or Terrorists: Who is Syria and Russia Bombing in Idlib?”