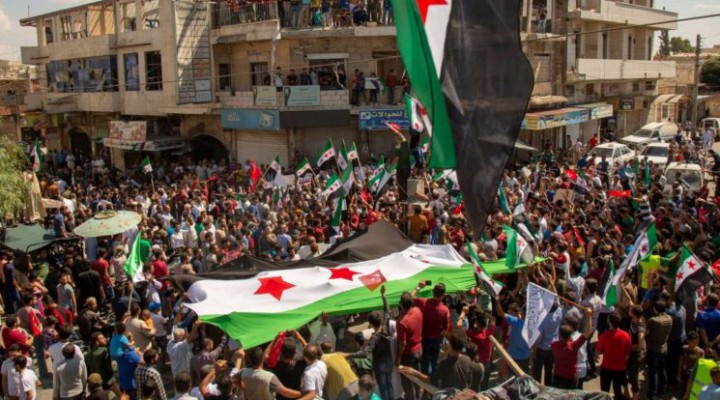 The infernal problem of conflict and violence in Syria is the direct consequence of Western states embarking on a criminal scheme years before the war started in 2011 in order to overthrow the government of President Bashar al Assad.

Remember when Donald Trump was running for president back in 2016, and he bragged he would “bomb the hell out of” terrorists in Syria. Now, in a reversal, Trump is calling on Syrian and allied Russian forces to stop bombing Idlib, the last redoubt of terror groups in Syria.

Trump urged Syria, Russia and Iran to “stop bombing the hell out of Idlib” claiming that civilians were being indiscriminately killed in the offensive to retake the renegade northwest province.

It seems like a strange plea from the American president. Idlib is unquestionably a stronghold for internationally proscribed terror groups, mainly Jabhat al Nusra (rebranded as Hayat Tahrir al Sham). Syrian government forces backed by Russian air power say it is their sovereign right to rout the militants, who have reportedly broken ceasefire agreements to launch attacks on civilian areas in government-controlled areas, as well as on the Russian air base at Hmeimim.

Moscow rejected Trump’s characterization of indiscriminate killing of civilians, saying that its operations along with Syrian forces are being directed at defeating illegally armed militants.

Moreover, the offensive to retake Idlib comes as new evidence emerges of the massive – albeit covert – international military support given to the various terror groups during Syria’s nearly eight-year war. Syrian state media this week reported arsenals of weaponry recently recovered in Damascus countryside and further south in the Daraa area.

The arsenals included rows and rows of heavy machine-guns, sniper rifles and US-made TOW missiles. Much of the weaponry was also of Israeli-origin, according to reports.

A separate find showed tonnes of C-4 plastic explosive, which Syrian military intelligence said was “US-made”. Up to four tonnes (4,000 kgs) were recovered this time around. Half a kilo of this lethal material is enough to kill several people.

This is not, of course, the first time that such huge caches of US, Israeli and NATO-origin weaponry have been recovered from territory formerly held by terrorists in Syria. There have been numerous such finds, which also included industrial chemicals made in Germany and Saudi Arabia, capable of producing sarin and other highly toxic munitions. That implies military-grade logistics and technical knowhow.

Taken together, the unavoidable conclusion is that internationally proscribed terrorist groups have been systematically weaponized by the US, its NATO allies, Israel and the Arab regimes of Saudi Arabia and Qatar. The array of weaponry indicates international and state-level organization, not haphazard procurement from disparate private arms dealers.

A plausible configuration for how the weapons into Syria were delivered and paid for is the following: most likely through smuggling routes from Turkey, Jordan and Israel. The oil-rich Arab monarchs would have footed the bill. The American CIA and Britain’s MI6 managed the logistics and weapons handling. The circuitous supply chain was sufficiently obscure to avoid oversight by the US Congress and European parliaments. But the bottomline is that terrorist organizations were evidently weaponized by Washington and its allies for the objective of regime change in Damascus.

That is why President Trump and other Western leaders do not have any moral authority whatsoever when they make belated calls for a ceasefire in Idlib province.

Syria has faced an international criminal conspiracy to destroy its nation. Washington and other NATO states have been fully complicit in directing that conspiracy by arming terror groups to the teeth. Western corporate news media have served as propaganda cover for the entire criminal enterprise, lionizing the terrorists as “rebels”, and continually demonizing the Syrian army and its allies in their efforts to liberate the country from the foreign-sponsored scourge. Recall the disgraceful Western media distortion over the liberation of Aleppo by the Syrian army and Russia in 2016-2017, endeavoring to portray that defeat of besieging terror groups as a “massacre”. The Western media never followed up their hysterical charade with subsequent reports of how Aleppo citizens actually rejoiced in their liberation from Western-backed “rebels”.

The infernal problem of conflict and violence in Syria is the direct consequence of Western states embarking on a criminal scheme years before the war started in 2011 in order to overthrow the government of President Bashar al Assad.

A proud and rich ancient civilization of pluralist tolerance among religions and ethnicities was almost destroyed by the nefarious regime-change war. It was largely due to Russia’s military intervention at the end of 2015 in support of its Syrian ally, as well as support from Iran and Lebanon’s Hezbollah, that turned the tide of war and saved Syria from being plunged into a failed state over-run by jihadist warlords.

Syrian state forces have every legal and moral right to finish this war by conquering the last bastion of foreign-backed terror groups holding out in Idlib. Those groups have forfeited any respite by their repeated violation of ceasefire agreements with the Syrian government, violations which targeted civilian areas.

Trump’s apparent concern over civilian deaths is no doubt misinformed by his intelligence agencies who have been covertly sponsoring the terror groups and their media agents, the so-called White Helmets.

In any case, as more evidence emerges of the systematic weaponization of terrorists by the US and its allies, the calls for “restraint” out of Washington and other Western capitals should be treated with contempt. If they had any genuine concern for civilian safety, they would be providing information on the whereabouts of other weapons caches hidden in Syria and supplied to their terrorist mercenaries.