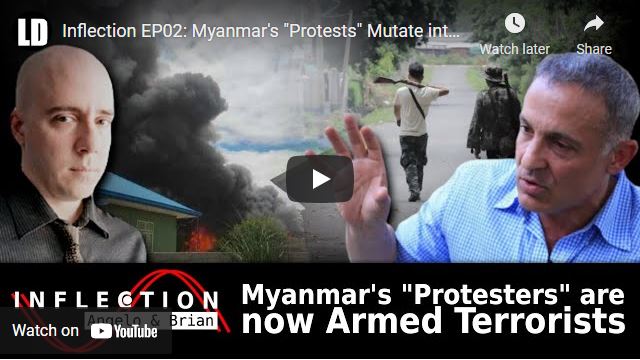 Inflection is a weekly show featuring Angelo Giuliano and Brian Berletic, discussing recent headlines and in-depth discussion of topics shaping the shift from West to East and unipolarism to multipolarism.

In this episode we discuss Myanmar’s ongoing political (and now armed) conflict. How predictable this was, how the Western media attempted to cover up the violence, and is now spinning terrorism as “armed civilian self-defense.”

We also cover a few headlines (Belarus/Ryanair and the US withdrawing from another treaty with Russia).

LD – Does US Withdrawal from another Nuclear Treaty Really Benefit Russia?:
https://landdestroyer.blogspot.com/2018/10/does-us-withdrawal-from-another-nuclear.html

Myanmar Now – Eight explosions and the shooting death of an accused informant reported in Thaketa:
https://www.myanmar-now.org/en/news/eight-explosions-and-the-shooting-death-of-an-accused-informant-reported-in-thaketa