The End of Pax Americana and the Rise of Multipolarity 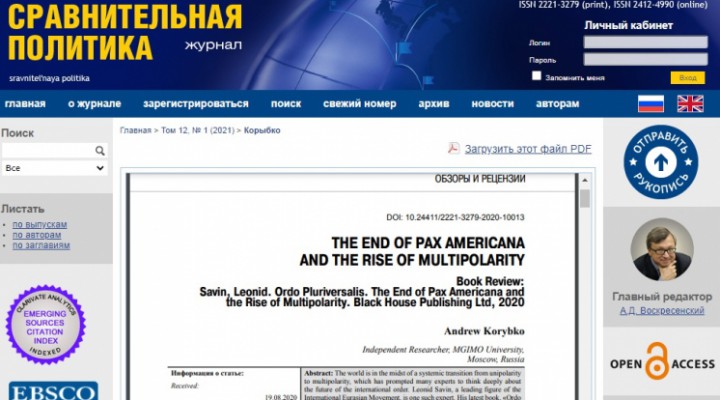 The world is in the midst of a systemic transition from unipolarity to multipolarity, which has prompted many experts to think deeply about the future of the international order.

The world is in the midst of a systemic transition from unipolarity to multipolarity, which has prompted many experts to think deeply about the future of the international order. Leonid Savin, a leading figure of the International Eurasian Movement, is one such expert. His latest book, «Ordo Pluriversalis: The End Of Pax Americana And The Rise Of Multipolarity», covers a wide range of topics in arguing that the coming world order will be a post-liberal one characterized by civilizations acting similar to how nation-states presently do in the current order.

Savin reveals how a rich diversity of social, political, religious, legal, and other systems have survived the brief period of American-led liberal unipolarity, which will lay the basis for the coming reorganization of international (or it should be said, intercivilizational) relations. Intriguingly, since one of the foundations of this worldview is that these various systems will become more prominent in the wake of America’s decline, he also attempts to incorporate many social theories into the field of political science to account for the increasingly complex nature of inter-entity relations. Savin’s work is therefore practical but also highly theoretical, though this review simplifies the gist of his ideas by focusing only on the most important ones which contribute to his conclusion of nation-state-like civilization-level actors becoming a subject in global affairs.