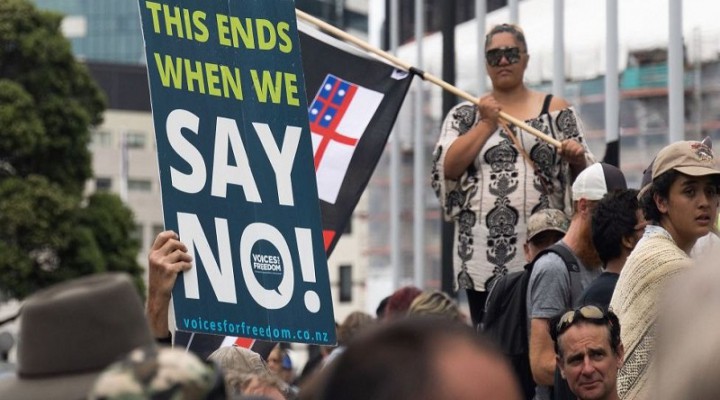 Average folks in many Western countries are increasingly rising up against what they sincerely regard as anti-scientific mandates being imposed upon the population for political reasons related to unprecedentedly strengthening the state’s power over its citizenry in violation of their constitutionally enshrined rights.

Jacinda Adern, the Prime Minister of New Zealand, maligned her country’s anti-mandate protests as “imported” after pointing to the presence of some Trump and Canadian flags in the crowd. Her narrative is just as false and self-interested as her Canadian counterpart Justin Trudeau’s, who’s claimed something similar in recent days. Both leaders hope to paint the overwhelmingly peaceful protesters in their countries as far-right radicals inspired by the former American President and possibly even connected to the QAnon conspiracy cult.

This is politically convenient from the perspective of external messaging in order to make it seem like their people truly aren’t rebelling but are simply being misled by foreign forces who are supposedly orchestrating an anti-mandate Color Revolution. To be sure, the participants are indeed employing classic Color Revolution tactics and strategies of the sort first masterminded by the late Gene Sharp, but that doesn’t automatically mean that they’re functioning as the “useful idiots” of some puppet masters abroad.

Rather, these political technologies have proliferated in the decades since they were first introduced to the point of being available to practically anyone who wants to attempt to utilize them in pursuit of whatever agenda it is that they support. What’s ironic is that these same tactics and strategies have finally boomeranged back against the West after first being weaponized by their governments against non-Western countries. That being the case, this was already on full display during summer 2020’s nationwide spree of urban terrorism in the US led by Antifa and BLM as well as the 6 January events.

Now, however, average folks in many Western countries are increasingly rising up against what they sincerely regard as anti-scientific mandates being imposed upon the population for political reasons related to unprecedentedly strengthening the state’s power over its citizenry in violation of their constitutionally enshrined rights. It’s unimportant whether observers agree or disagree with their motives since all that’s being asked is for them to accept that such views exist and are arguably the driving force behind this spree of purely grassroots de facto Color Revolutions across the West.

While it might be the case that there’s some foreign funding involved through various online platforms, that in and of itself doesn’t automatically mean that other governments are involved in these rallies since it’s completely unbelievable that the Biden Administration would support the Canadian and New Zealander protesters. What seems to be happening is that other average citizens across the West want to support their “fellow travelers” out of solidarity exactly as many others did by donating to Antifa and BLM in spite of those two movements being much more chaotic and violent.

These observations suggest that partisan forces across the world are independently networking with one another even though the liberal-globalist ones represented by Antifa and BLM ultimately ended up being exploited as pawns by the Democrats and their supporters in the US’ permanent military, intelligence, and diplomatic bureaucracies (“deep state”) as part of their regime change campaign against former president Donald Trump. No such foreign “deep state” trace has credibly been discovered in Canada or New Zealand, nor is any likely due to their resistance to these movements.

It’s difficult for so-called “model democracies” like Canada’s and New Zealand’s to accept, but their governments aren’t perfect and their people aren’t always happy with everything that their rulers have imposed upon them over the past two years on the pretext of being in their “best interests”. Aware of their constitutionally enshrined rights, these people have independently and peacefully assembled to rally against their leaders’ contentious decisions. Some are obviously inspired by other “fellow travelers” abroad but such imagery isn’t automatic proof of any foreign “deep state” plot.

The increasingly frequent employment of Color Revolution technologies and the regular enhancement of their efficiency speaks to just how successful the late Sharp was in popularizing his regime change tactics and strategies. Establishment forces across the West have consistently denied that Color Revolutions even exist, even to this day mocking Russia and China’s warnings about them in spite of these very same techniques being utilized in those same Western countries right now. To acknowledge Color Revolutions at home would be to grant credence to those non-Western countries’ concerns.

That, however, might soon be happening if Trudeau and Adern’s deceitful messaging catches on and becomes the Western Establishment’s new narrative. Such a scenario would speak to how desperate they are to discredit these genuinely grassroots movements that they’d even finally grant credence to their foreign rivals’ prior claims about how destabilizing these political technologies can be. This suggests that those demonstrators are making a very powerful impact on shaping their respective countries’ discourse over mandates and might actually stand a chance of changing some policies.

The Battle for Freedom in Canada Is Not Over, But at the moment the Truckers Are Ahead

Cracks In The Covid Narrative

The Elite Gathers Its Forces for a Counterattack on the Truckers

The Ruling Elites and the Governments They Control Have Shown Conclusively that They Are Against Us, the People

What Is Going On With Covid In Israel?