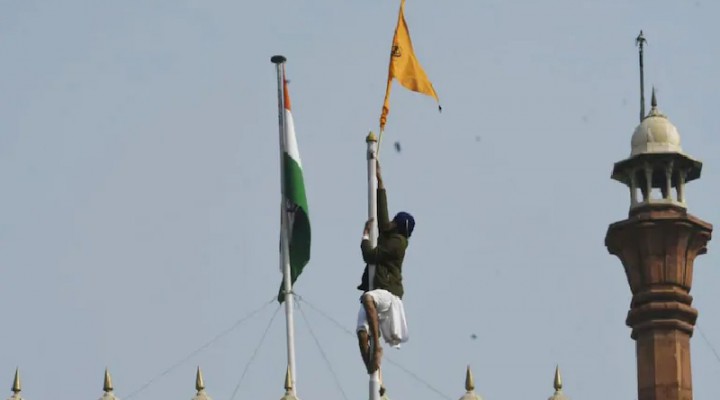 Exclusive- Indian Prime Minister Modi is being gored on the horns of yet another dilemma entirely of his own making, this time regarding the Punjabi Sikh self-determination movement known as Khalistan. Local farmers have been protesting outside the Indian capital of New Delhi for several months already in response to the state’s economically fascist policy of de facto surrendering the national agricultural sector to foreign big business interests and those within the country that are closely connected to the ruling BJP Hindu nationalists (whose ideology is known as Hindutva).

I wrote about this late last yea for Pakistan’s Tribune Express in an analysis about how “India’s Farmers Are Rising Up Against Modi’s ‘Great Reset’”, which contextualized this genuinely grassroots-driven resistance movement as the world’s leading force against the World Economic Forum’s (WEF) “Great Reset”/”Fourth Industrial Revolution” (GR/4IR). I then shortly thereafter followed up events with a more focused analysis exclusively written for The Alt World titled “Khalistan Is The Solution: From Sikh Genocide To Econocide” where I argued that only the independence of Khalistan can ensure Sikhs’ economic and other rights.

Events have since climaxed on Tuesday after angry farmers broke past police barriers and even symbolically stormed the capital’s Red Fort to raise the yellow flag associated with the Khalistani movement. Reports are streaming in that at least one protester was killed and many more people injured during the clashes that broke out on India’s Republic Day according to Russia’s publicly financed international media outlet Sputnik. This dramatic development occurred while a military parade was held elsewhere in the city, thus setting up an unforgettable contrast between the state and its citizenry on this important day.

I wrote back in February of last year how “India’s Waging A State-On-Citizen Hybrid War To Build Modi’s Hindu Rashtra”, which examined the larger nationwide protest movement at the time which was driven by a combination of the country’s enormous Muslim minority, leftist dissidents, the lower “castes”, and all others who were uniting in opposition to the ruling BJP’s religious policies that they rightly regarded as a violation of their country’s constitutionally enshrined secularism. Those demonstrations quickly died down as the COVID-19 pandemic swept through India but were revived by the farmers-led protest movement late last year.

The Sikhs’ symbolic capture of New Delhi’s Red Fort represents a new escalation of the people’s resistance to religious rule and worsens the dilemma that Modi has found himself in. The government must now decide whether to brutally suppress the protesting Sikhs and risk sparking yet another pogrom against them like the infamous one back in 1984 that could also galvanize the farmers-led nationwide protest movement or submit to the latter’s demands to repeal the ruling party’s economically fascist agricultural policies and thus risk the wrath of its ultra-jingoist and highly violent base. Either way, Modi has no silver bullet solution to this dilemma.

The overarching trend is that his nearly seven-year-long rule of India has exacerbated preexisting identity tensions within society as the BJP sought to impose a combination of Hindutva and economically fascist policies upon the rest of this very cosmopolitan country. The exploitation of majoritarian rule as a gross abuse of basic so-called “democratic” principles in the unconvincingly self-professed “world’s largest democracy” amounts to an unquestionable Hybrid War waged by the state against its literally hundreds of millions of dissident citizens. There’s no plausible way that this can end well regardless of whatever Modi decides to do.

Should he instinctively resort to brutal force as Hindutvas like him are prone to do, then he might very well engender real strong criticism from the new Biden Administration which plans to place its interpretation of democracy and human rights at the fore of America’s soft power-driven re-engagement with the rest of the world. The US’ new leaders probably wouldn’t remain silent to any globally reported violations of those two principles and are likely to at the very least issue a critical statement against the Indian government, with some policymakers possibly even using events as a pretext to further pressure India to submit to American will.

In practice, this could potentially take the form of political condemnations of domestic events which could imply forthcoming sanctions in the most extreme scenario or at least the threats thereof, thus compounding earlier pressure on India to impose CAATSA ones if it goes through with its S-400 air-defense deal with Russia. I wrote about the dynamics of the latter in a recent analysis for the Tribune Express about how “The Future Of US-Indian Relations Depends On New Delhi’s S-400 Decision”. If Modi responds to new protest-related pressure from the US by dumping that deal, then it’ll open up a whole new can of worms for India’s relations with Russia.

Whichever way he turns, the Indian leader is being gored by dilemmas entirely of his own making, which are increasingly converging into a mega one brought about by his failed domestic and international policies. His aggressive imposition of Hindutva and economically fascist polices at home are now leading to problems that could be taken advantage of by the US to further destabilize his false “balancing” act between that country and Russia. Sooner or later, Modi will have to make two fateful choices about whether he’ll continue aggressively imposing Hindutva and economic fascism on society, and whether he’ll fully submit to the US’ policy demands.

It Was Inevitable That India Would Seek To Actively ‘Contain’ China

0 thoughts on “Modi’s Khalistan Dilemma Will Only Destabilize India”