HOME / Exclusive Subjects / Khalistan Is The Solution: From Sikh Genocide To Econocide 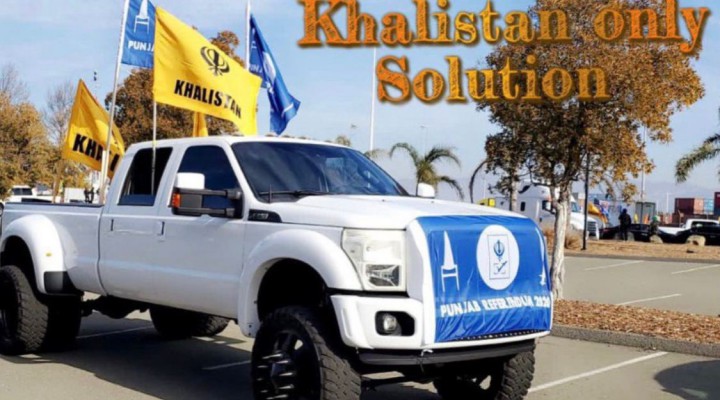 Exclusive– The long-held aspirations of Indian Punjab’s Sikh population for self-determination might receive an enormous boost in the midst of the country’s large-scale farmers’ protests. Although more than just that state’s Sikhs are participating in these peaceful demonstrations, they form a crucial part of this movement which wouldn’t be possible without them acting as the vanguard. Their home region’s agricultural potential is enormously important for the rest of India, which gives them much more significant leverage over national affairs than many of them had previously thought possible.

The past couple of years have seen the Sikhs For Justice (SFJ) plan a peaceful plebiscite on their region’s independence as historical justice for the 1984 genocide of their people and the correcting of the massive historical wrong that was made when their home region joined India after independence. Although this group’s goals are fully in line with the UN Charter, they’ve been defamed as “terrorists” by the national government, which will stop at nothing to thwart their self-determination. It’s for this reason why some splinter activities have lately been observed such as other Sikh organizations pressuring farmers not to support Khalistan.

These groups claim that Khalistan would be a disaster for farmers when in reality it’s the best possible solution for them. Independence would allow Sikhs to ensure that they’ll never again risk losing control over their agricultural sales. New Delhi can no longer be trusted after the de-facto social contract between the state and its farmers was violated by Prime Minister Modi’s so-called “reforms”. The latest protests were therefore extremely symbolic in this respect since they show that trust between the two is broken, perhaps irreparably. This wasn’t the result of a SFJ or other plot like New Delhi claims, but none other than Modi’s own blunder.

The SFJ already had very strong historical and legal arguments in their favor, but perhaps the most important yet has just emerged as a result of the latest developments, and that’s the pragmatic argument pertaining to farmers’ rights to sell their produce for a fair price. The Indian economy is gradually becoming more neoliberal due to Modi’s “big bang” policy, and this will ultimately see the state remove subsidies to its farmers and leave them at the mercy of the marketplace, which will soon be dominated by big businesses, some of which might be foreign-owned. Without this backbone of support, many farmers will lose their livelihoods.

Modi wants this to happen by hook or by crook since he envisions India’s hundreds of millions of farmers and their dependents migrating to the cities to sell their labor to international corporations instead of earn it on their own in the fields. This is part and parcel of his plans to “industrialize/modernize” the country, but it’ll be massively disruptive to society, something that the farmers themselves fear all too well and which is why they’ve descended on the capital in peaceful protest. What the Sikhs need at this crucial time is control over their region’s agricultural policies, which can only be achieved with independence.

For instance, Khalistani leaders could commit to continuing and even increasing New Delhi’s subsidies to this industry in order to ensure the loyalty of their farmer base. This would be a very strategic decision if made in the present moment because it’ll speak to the deeply held desires of the protesting farmers. They shouldn’t be misled by unionist splinter movements which are trying to dishonestly convince them that their future can only be ensured by remaining part of India. The trust that’s been broken between the Sikh farmers and New Delhi will likely never be restored after what happened, and the only way to move is forward, not backward.

Khalistan is actually at the threshold of an historic opportunity for the cause since its supporters can finally succeed in truly internationalizing their struggle if they use the farmers’ protests to popularize it across the world. Everyone’s eyes are on India as the planet’s largest peaceful protest movement continues to grow by the day. Canadian Prime Minister Trudeau recently extended his support to its participants too, which provoked an international scandal after New Delhi angrily chided him. The potential is therefore present for Khalistan to use this movement as a vehicle for internationalizing the cause so long as the political will is present.

It can be predicted that the more visible Khalistani character of the protests would likely elicit a very strong reaction from the authorities, though such a reaction might nevertheless be inevitable either way as the state continues to lose control over the dynamics and narrative of the protests. What’s meant by this is that a crackdown might already be planned regardless of the pretext, even though the reassertion of the Sikhs’ self-determination rights might be exploited as the reason. Should that be the case, then it’s better for it to happen in reaction to Khalistan than for any other reason that the authorities might invent.

Since the eyes of the world are watching India right now, they’d witness the brutality of its security services suppressing the peaceful protesters and possibly even doing much worse depending on whatever it is that Modi is planning. The soft power impact of everyone watching the police beat unarmed and innocent Sikh farmers peacefully protesting for Khalistan would very likely prompt a strong international reaction, whether by Canada, human rights groups, and/or the UN, which in turn would ensure that everyone in the world becomes aware of the Khalistani cause.

It can only be hoped that the farmers’ protests succeed in their mission without the state resorting to the brutal use of force like many predict that it’s planning, but it would be best if this movement was also used as the vehicle for popularizing the Khalistani cause and awakening the political consciousness of its long-suppressed people. Politics, law, and human rights are always important, but nothing is of more immediate concern than putting food on people’s plates, which is the responsibility of Sikh farmers. Modi is making it much more difficult for them to do this in a respectful way, hence their passionate opposition to his policies.

In the midst of their large-scale peaceful demonstrations, it’s only natural that they come to realize the connection between their professional, political, legal, and human rights. Depriving them of their livelihoods like Modi aims to do will inevitably worsen their other rights as well, which will in turn massively subjugate the Sikh people even more to New Delhi and likely increase the Sikh suicide rate that’s been 1,000 a year for the past 20 years. Now’s the time for them to put a stop to the steady erosion of their rights over the decades, peacefully stand up for their self-determination, and proudly promote the Khalistani cause to save their future.

It Was Inevitable That India Would Seek To Actively ‘Contain’ China

One thought on “Khalistan Is The Solution: From Sikh Genocide To Econocide”