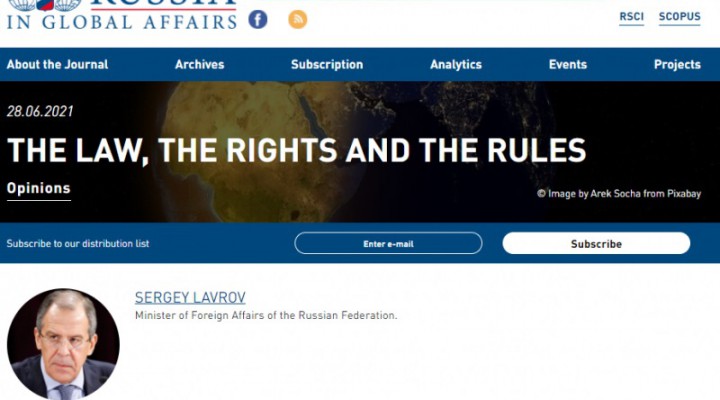 Russian Foreign Minister Sergei Lavrov published an extremely detailed article earlier this week that should be read in full by all supporters of the emerging Multipolar World Order.

Russia has had enough of Western hypocrisy over its so-called “rules-based order” (RBO), especially after the hostile comments made by some of its counterpart’s officials following the Putin-Biden Summit in Geneva. Foreign Minister Sergei Lavrov therefore felt compelled to lambast Western aggression and passionately defend multipolarity in an attempt to prevent the most ideologically zealous unipolar forces from undermining the recent progress that was made in improving Russia’s relations with the West. He did this through the extremely detailed article that he published in the prestigious Russia In Global Affairs journal titled “The Law, The Rights And The Rules”, which should be read in full by all supporters of the emerging Multipolar World Order (MWO).

The present analysis summarizes the most important points that he made for those who don’t have the time to review the entire piece, which is admittedly very long but nevertheless well worth the read. Russia’s top diplomat spoke about the joint Russian-American desire to find a “mutually acceptable balance of interests” between them, which is the most pragmatic means for repairing their recently ruined relations. He then proceeded to condemn those Western officials who immediately made very hostile statements right after the Putin-Biden Summit. In his mind, the run-up to that event was characterized by the US’ efforts to present a united Western front in support of the RBO in order to more confidently contain Russia, China, and others.

Lavrov has no doubt that the US’ proposed “Summit of Democracies” will purposely exclude key countries due to the ideological nature of that gathering. He’s especially concerned by the New Atlantic Charter between the US and UK which he fears will widen the gap between so-called “liberal democracies” and all others. By labeling Russia and China as “authoritarian powers”, the West is establishing the ideological groundwork upon which to jointly “contain” them. The US and its allies’ self-designed “right to interfere” in those countries’ and others’ domestic affairs on the basis of “human rights, civil society, opposition treatment, the media, governance and the interaction between the branches of power” is highly disturbing.

Russia and China are their own civilizations, Lavrov rightly reminded his readers, and they therefore have different values that they rely upon for organizing all aspects of their societies. The contrast between their models and the West’s raises the question of “what is the most effective form of government for coping with and removing threats that transcend borders and affect all people, no matter where they live?” One possibility, according to Lavrov, is the concept of so-called “autocratic democracies” recently introduced by some experts. In any case, Russia’s top diplomat insists that mutual respect and dialogue is needed between all countries irrespective of their socio-political systems since the multipolar world is rapidly becoming a reality.

As such, the principles enshrined in the UN Charter have never been more pertinent. These specifically include “respecting the sovereign equality of states, non-interference in their domestic affairs, peaceful resolution of conflict, and the right to self-determination.” The West’s approximately half-millenium-long dominance of global affairs is coming to a close, though those countries continue to cling to their fading leadership by “putting artificial brakes on the objective process consisting in the emergence of a polycentric world.” One such example is the faux multilateralism being pioneered by France and Germany, which seek to unilaterally impose the EU’s own ideals over all others in contravention of the principles enshrined in the UN Charter.

Another one is the creation of various working groups on certain topics such as cybersecurity, human rights, media freedom, and so on. Lavrov considers these to be redundant because the UN already provides a platform for discussing these issues. Moreover, those alternative structures always exclude certain countries and are actually intended to impose the Western vision upon all others. The same goes for the EU’s horizontal sanctions regime. Worst of all, however, are NATO’s expansion towards Russia’s borders and the attempts to revise the outcome of World War II, which are the most dangerous of all. For these reasons, Lavrov regards the RBO as “the embodiment of double standards.”

In what will certainly earn him plenty of applause from his country’s most consistent supporters, Lavrov then claimed that “All world religions, the genetic code of the planet’s key civilisations, are under attack. The United States is at the forefront of state interference in church affairs, openly seeking to drive a wedge into the Orthodox world, whose values are viewed as a powerful spiritual obstacle for the liberal concept of boundless permissiveness.” He’s especially disgusted by how “the ‘rules’ concept also manifests itself in attempts to encroach on the very human nature. In a number of Western countries, students learn at school that Jesus Christ was bisexual. Attempts by reasonable politicians to shield the younger generation from aggressive LGBT propaganda are met with bellicose protests from the ‘enlightened Europe.’”

Another important point that he made which deserves to be reflected more deeply upon by all is that “The veil of its superiority conceals weakness and the fear of engaging in a frank conversation not only with yes-men and those eager to fall in line, but also with opponents with different beliefs and values, not neo-liberal or neo-conservative ones, but those learned at mother’s knee, inherited from many past generations, traditions and beliefs.” Taken together with his quotes from the above paragraph, it can be concluded that Lavrov basically believes that the West is waging a Hybrid War on Civilization itself, specifically the world’s diversity thereof. This is arguably due to what he describes as NATO and the EU’s “self-designated global messianic mission” which manifests itself through their meddling all across the world and in every conceivable sphere of life.

Lavrov then sent a strong message to the West: “As for Russia, it is high time that everyone understands that we have drawn a definitive line under any attempts to play a one-way game with us…The policy of having the Russian Federation develop on its own, independently and protecting national interests, while remaining open to reaching agreements with foreign partners on an equal basis, has long been at the core of all its position papers on foreign policy, national security and defence…Let me emphasise what President Vladimir Putin has said on multiple occasions: there have been no unilateral concessions since the late 1990s and there never will be. If you want to work with us, recover lost profits and business reputations, let us sit down and agree on ways we can meet each other half way in order to find fair solutions and compromises.”

Russia’s top diplomat concluded with a constructive proposal for the way forward. In his opinion, it rests with the G20, which includes leading Western and non-Western countries. Their interactions must be guided by the principles of the UN Charter, and Russia’s Greater Eurasian Partnership can help to bring together the interests of every country on the supercontinent. All of these ideas are very important, but there’s a high chance that they’ll mostly fall on deaf ears among the Western countries that need to hear them the most. Most of the non-Western ones, however, will deeply appreciate all of Lavrov’s insight since it perfectly aligns with their respective visions. This observation speaks to the fact that Russia’s ideological critiques of the West represent global opinion, therefore confirming the Eurasian Great Power’s growing soft power across the world.

0 thoughts on “Lavrov Eloquently Articulated Multipolarity In His Latest Article”