HOME / SOCIAL/CULTURAL / Korybko To Fars News: Social Media Is Weaponized As Part Of The Hybrid War On Iran 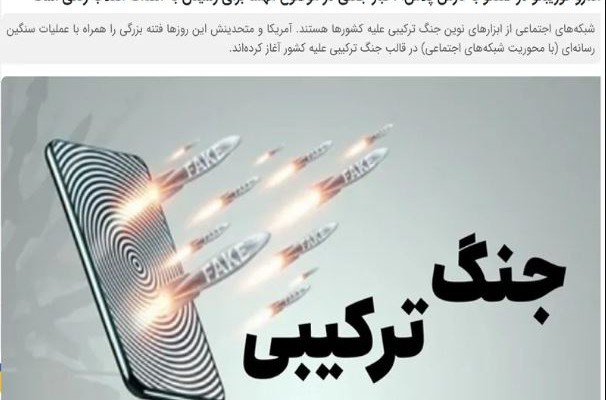 Here’s the English-language version of the interview that I recently gave to Fars News about Iran’s latest Hybrid War unrest.

1. What was the role of social media in the recent riots in Iran?

Social media served to disseminate fake news about the so-called “trigger event” that was exploited as the pretext for setting into motion the latest long-planned Color Revolution attempt. It also provided a platform for participants, both those who knowingly conspire with foreign parties as well as the vast majority of folks who were misled by their treasonous compatriots, to coordinate their destabilizing crimes against the state.

2. What is happening in Iran? Is it a Color Revolution?

The latest unrest bears all the hallmarks of a classic Color Revolution attempt, which refers to the external exacerbation of preexisting socio-political tensions through fake news in order to weaponize protests against the targeted state. Iran is being attacked yet again through hybrid means as punishment for its refusal to unilaterally concede on its objective national interests with respect to the nuclear negotiation, its strategic ties with Russia, and the Islamic Republic’s rising role in multipolarity.

3. How does the US use social media against Iran through Hybrid War?

Social media brings together folks who already harbor some degree of anti-state sentiment, further radicalizes them through fake news, and then provides a platform for coordinating their crimes against the state. Without social media, their Color Revolution plots would fizzle out and lose their effectiveness. On the flip side, however, social media can also be used by patriots and associated civil society organizations to counteract false and treasonous narratives.

4. What is the effect and result of this information war via social media against the Iranian people and government?

Information warfare aims to widen preexisting divisions within society in order to destabilize the targeted state by pitting its people against one another and against their government as well. Thus far, it’s had somewhat of an impact as evidenced by the continued unrest, but at the same time, it also hasn’t succeeded in throwing the country into total chaos. This Hybrid War challenge will remain, but it’s not insurmountable, especially if society comes together on a patriotic basis to oppose this meddling.

5. How does social media change the behavior and perception of people?

Social media can reinforce preexisting perceptions, especially whenever fake news is employed to this end to further radicalize those who already harbor some degree of anti-state sentiment. Because it’s accessible from the palm of any person’s hand, its effect can be instantaneous and provoke them into overreacting right away if they read something dramatic. People need to obtain proper media literacy in order to discern fake news from real news, as well as learn how to control their emotions better.

6. Which techniques does the US use to manipulate the people of Iran in order to reach its political and geopolitical aims?

The US’ cultural anthropologists, the anti-state Iranian diaspora, intelligence agencies, regional experts, and social scientists have closely studied the socio-political (soft security) trends in the Islamic Republic for years. They’ve therefore identified what they believe to be their target’s top fault lines and created the weaponized fake news narratives that they expect to further widen them. Their divide-and-rule operations are then mostly carried out through social media and their agents inside Iran.

7. What is the goal of the US’ Hybrid War on Iran?

The grand strategic goal is to carry out regime change against Iran’s revolutionary leadership and then Balkanize this historically diverse state, whether formally or de facto via the Bosnian scenario of so-called “identity federalism”. The Islamic Republic is being punished for always standing on the side of justice against the joint US-Israeli-Saudi plots in the region. Washington is also tremendously angered that Tehran is comprehensively expanding its strategic relations with Moscow too.

8. And what should Iran do with social media?

Social media must remain monitored and regulated in order to identify and preemptively thwart latent security threats, including those that rely on fake news in order to advance their devious anti-state goals. These platforms are double-edged swords that can be employed to divide and rule society but also to unify it depending on who uses them and for what ends. The state and patriotic civil society should therefore think deeply about how they can use social media for positive purposes.

“U.S. used all means to try to weaken, divide Iran”

0 thoughts on “Korybko To Fars News: Social Media Is Weaponized As Part Of The Hybrid War On Iran”