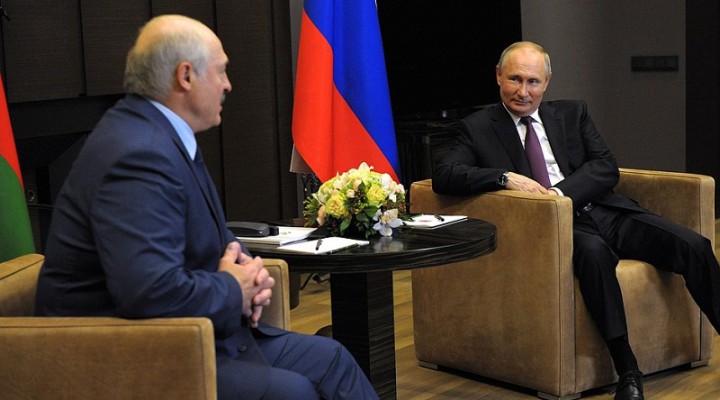 The West’s coordinated pressure campaign against Belarus in the aftermath of last week’s Ryanair incident almost counter-intuitively suggests that it wants the Eastern European country to become more dependent on Russia despite a year of fear mongering about this scenario, which might actually be silently wished for at this particular point in time due to the hopes that it could provoke another round of Color Revolution unrest.

Regardless of whether one believes the predominant narrative implying that Belarus staged a bomb scare in order to arrest an extremist on board a flight transiting through the country’s airspace or was perhaps set up as part of a Western (and/or possibly Ukrainian) false flag to justify a forthcoming series of preplanned escalations against it, there’s no denying that President Lukashenko’s foreign foes have sought to exploit this scandal to the extreme. From cutting its airlines off from European airspace to imposing another round of targeted sanctions, the end effect is that Belarus will have nowhere to go for much-needed relief from this newfound pressure than to embrace Russia even more than before. It was precisely this scenario that the West fearmongered about for a year already, yet it almost counterintuitively seems as though they now want it to materialize at this particular point in time, perhaps to provoke another round of Color Revolution unrest.

To the credit of the Belarusian security services, they succeeded in restoring order to the country despite several months where the outcome of the foreign-backed regime change campaign was uncertain. The situation is largely under control, but as any observer of such plots should be aware of by now, that doesn’t mean that everything will remain the same forever. Color Revolutions don’t ever truly die, they simply lie dormant until another opportunity either naturally arises or is manufactured. Such seems to be the case in Belarus right now whereby the country’s expected enhancement of comprehensive ties with Russia in response to the latest Western pressure campaign might be taken advantage of to justify a new round of unrest driven by artificially exacerbated nationalist sentiment. After all, one of the public pretexts for last year’s violence was that Belarus was supposedly at risk of losing its sovereignty to Russia through the Union State.

Never mind that no such “unification” scenario was ever seriously in the cards like the most insincerely concerned foreign observers claimed (whether for better or for worse depending on one’s preferred geostrategic vision for the region), but it was simply the fact that talking about a lie so much finally made it seem like reality and therefore provided the cover for what the West falsely presented as so-called “pro-democracy/-sovereignty protests” following last summer’s election. As I wrote in mid-May, “Negative Nationalism Is A Potent Means Of Political Mobilization In Parts Of Europe”, particularly Central & Eastern Europe (CEE). The Belarusian people veritably exist as a separate nation from Lithuanians, Poles, Russians, and Ukrainians, although they share very close similarities with all three of them to differing extents. Even so, the pernicious foreign-backed propagation of this sentiment focuses exclusively on their differences with Russia.

The purpose in doing so is to accelerate the weaponizing shifting of its people’s perceptions about their larger and arguably closest neighbor so as to indoctrinate the next generation into regarding Russia as a supposedly perpetual enemy to their nationhood exactly as many Ukrainians nowadays have been brainwashed into believing. In other words, the many years of preconditioning that prepared the socio-political ground for 2014’s EuroMaidan spree of urban terrorism are being compressed into the span of a single year during the West’s latest Hybrid War in the region. Unlike what this information warfare narrative claims, Russia isn’t a so-called hegemon that’s supposedly hellbent on subjecting all nations both within its own borders and Near Abroad, but is a cosmopolitan civilization-state whose historical model of development more closely resembles that of diverse Asian ones than the comparatively more homogeneous Western models.

Furthermore, Russia also embraces the pro-sovereignty vision that’s also swept across large swathes of Asia in recent years unlike the neo-liberal anti-sovereignty globalist one that’s captured control of practically every Western nation. Although there’s no such thing as a perfect model since every one can obviously improve in one way or another, Russia’s is unquestionably the best for its people as proven by President Putin’s impressive two-decade-long track record. It’s of course up to the Belarusian people themselves to decide whether the Russian or Western models are best for their country, but last year’s election showed that they supported President Lukashenko, who nowadays envisions moving closer to Russia despite some scandalous outreaches to the West in the run-up to the vote. He’s since stopped his balancing act though due to its obvious failure after his new Western friends immediately commenced a Color Revolution to overthrow him.

Realistically speaking, given its geostrategic limitations, Belarus had no other option if it endeavored to retain its hard-earned sovereignty in the face of such serious Western threats. Having said that, it’s understandable that there might be some moderate members of the country’s opposition who feel uncomfortable with this reactionary pivot for whatever their reasons may be, whether they’re nationalistic or sovereignty-related or whatever else, but anti-state violence of course isn’t ever the answer. In fact, it’s arguably treasonous, especially if one acts at the behest of foreign powers like Roman Protasevich – the extremist who was arrested after the Ryanair incident – did. Nevertheless, there’s still presumably a proportion of opposition members who might be “well-intentioned” but are manipulated into behaving as the West’s useful idiots. It’s these individuals who could form the core of another Color Revolution push as Belarus moves closer to Russia in the future.

Observers should step back for a moment and realize how counteproductive the West’s policy has been. Had they not gotten greedy with their goals, then they could have just patiently waited until Belarus’ then-irresponsibly executed balancing act between Russia and the West naturally provoked further distrust between Minsk and Moscow, as was actually the trend in the over half-year leading up to last year’s vote. The dynamics were thus that Lukashenko was inflicting considerable damage on his country’s bilateral relations with Russia with expectation of receiving better economic deals from the West with time, particularly the Polish-led “Three Seas Initiative” and its core of the “Lublin Triangle”. All that the West had to do was sit back and let everything unfold as it was, but someone got carried away and convinced them to commence a Color Revolution campaign against him after the election, perhaps because they wrongly thought it would actually succeed.

That completely incorrect assessment backfired on them after Belarus survived the regime change onslaught and moved closer to Russia in spite of both their fears and honestly also Lukashenko’s own at least as he expressed them prior to the election. Instead of calling off the Color Revolution campaign and trying to repair the damage that they inflicted on Belarus’ balancing act (which wasn’t even all that balanced to begin with as explained but was more akin to rhetoric for thinly disguising his gradual reorientation towards the West), they doubled down and turned their worst nightmare into a fait accompli. While some might just chalk this up as yet another of the West’s countless geostrategic mistakes, it might very well be that someone decided that it’s best to “embrace the bad” (i.e. closer Russian-Belarusian relations) in order to them have a second chance at exploiting “negative nationalism” in an attempt to revive the Color Revolution movement.

One can draw some vague parallels between this scenario and the Soviet Union’s military intervention in Afghanistan in December 1979, the latter of which occurred around half a year after the CIA armed anti-government forces there in an attempt to provoke what the West described as a so-called “invasion” (despite it being requested by the internationally recognized government). It might be that the West now wants Belarus to move as close to Russia as possible in order to both become an economic albatross around Moscow’s neck and also a serious security challenge if foreign-backed anti-government militants begin to wage a preplanned so-called “national liberation campaign” in response. Of course, everything might not go that far, but it’s worthwhile wondering what trick the West might have up its sleeve since it’s difficult to believe that it doesn’t realize that its policies are pushing Belarus closer to Russia exactly as they fearmongered about for a year.

The scenario of closer Russian-Belarusian relations wouldn’t necessarily be disastrous though since it all depends on the details. A merger between the two Union State countries still doesn’t seem to be on the cards, just closer comprehensive cooperation, especially in the economic and security spheres. While Russia’s role in Belarus is a very large and important one, it’s inaccurate to describe it as disproportionate like some do since there’s no way that two countries with such asymmetries between them can ever truly have equal relations. That, however, doesn’t mean that Russia is taking advantage of Belarus but just that Belarus needs Russia more than the reverse, especially right now. Closer Russian-Belarusian relations could help stabilize the socio-economic situation in Belarus after the latest Western pressure campaign, thereby possibly thwarting a second “negative nationalism”-driven round of anti-government violence there. In any case, the situation deserves closer scrutiny since the strategic dynamics seem to be entering uncharted territory compared to last year.

0 thoughts on “Does The West Counter-intuitively Want Belarus To Become More Dependent On Russia?”