HOME / WORLD / Are Death Threats the New Norm for Zionists and the Rampaging Right? 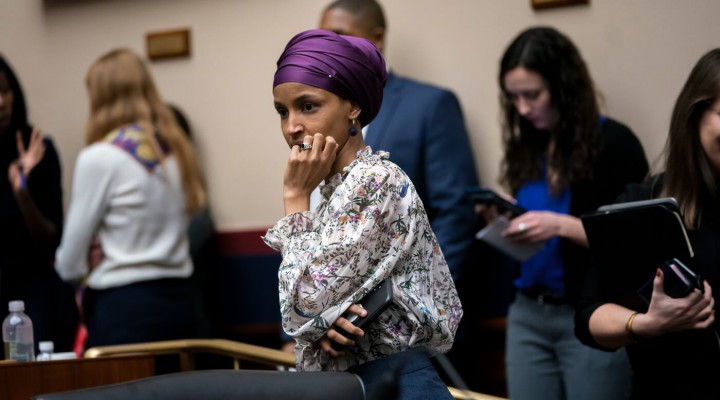 MPN- Ilhan Omar is not the first prominent politician to challenge Zionism or its methods of shoring up support in the U.S. She is, however, the first Hijabi in Congress.

As death threats against Rep. Ilhan Omar (D-MN) continue to mount, President Racism continues to fan the flames of hate.

On Saturday, President Donald Trump spoke to an audience of staunch, right-wing Zionists with the Republican Jewish Coalition. It had all the elements one would come to expect of such an event: casino magnate and political mega-financier Sheldon Adelson was given a standing ovation and left-wing Jewish anti-occupation groups protested the president.

Trump has made unprecedented appeasements to the apartheid state, including moving the U.S. Embassy from Tel Aviv to occupied Jerusalem, recognizing the illegally annexed Syrian Golan Heights as rightfully Israel’s, and hawkish posturing towards Iran (pulling out of the Iran Nuclear Deal and, on Monday, recognizing its army as a terrorist organization).

Trump has made it clear that a feature of his 2020 re-election strategy is to drive a wedge into the longstanding relationship between Jews and the Democratic Party. In March, Trump said that the party had become “anti-Jewish,” a clear rebuke of Rep. Omar.

The firestorm of false accusations of anti-Semitism has hardly abated since Omar issued an audacious tweet in February, linking donations from the premiere Zionist lobby in the U.S. to Congress’ unquestioning support for apartheid Israel. On Saturday, Trump continued to hammer the non-issue.

On the same day that one of his fans was charged with plotting to murder her, President Trump gratuitously attacks Ilhan Omar pic.twitter.com/rPbC7BYNnu

The comments came within hours of the announcement of criminal charges against a New York Trump supporter, Patrick Carlineo, who threatened to kill Omar during a March 21 phone call with Omar’s staff: “Why are you working for her? She’s a fucking terrorist. I’ll put a bullet in her fucking skull.”

There is no evidence that Ilhan Omar is an extremist. None. Yet, accusations of such have dogged her throughout her campaign and during her time in the House. Far-right media is rife with unsubstantiated claims that Omar married her brother, and pundits on cable news and in conservative rags have disingenuously questioned whether she has ties to extremist groups. While journalists are supposed to question, everybody understands a dog whistle when they hear one, and so those “questions” are, in reality, insinuations. This tactic is straight out of the post-9/11 War on Terror propaganda playbook.

That question was posed by Fox News pundit Jeanine Pirro, who also called Omar’s hijab “antithetical to the constitution.” Pirro used standard Fox News disinformation tactics. The very first amendment to the constitution ensures, “Congress shall make no law respecting an establishment of religion, or prohibiting the free exercise thereof.”

It’s no wonder that Carlineo told the FBI that he was honoring the intentions of Thomas Jefferson. “If our forefathers were still alive, they’d put a bullet in her head,” he told agents.

It should also be noted that “Sharia law” is a go-to scare word that means very little in the real world. Sharia, or law based of the principles of the Quran, takes many different forms in the multitude of Muslim nations that embrace it. But just as we wouldn’t say that Israel’s atrocities are based on Jewish values, when a Muslim nation commits an atrocity, it isn’t Islam that is to blame. As with Israel, it’s usually a combination of greed, ignorance, and geopolitics.

It’s this kind of hate and lies that leads to death threats against Rep @Ilhan Omar. Stop the hate. Stop the lies. https://t.co/DiDzN9VBwR

The president, Fox News, and a host of other Zionists, pundits and journalists have put a target on Omar’s back, and the proof is in the pudding. Just a few days prior to the menacing phone call from Carlineo to Omar’s staff, Omar’s speaking engagement with a Muslim civil rights group was similarly threatened. A woman politely inquired of the Hilton hotel that was to host the event:

What would you do if I told you your hotel was going to be bombed? That is exactly what’s going to happen if you allow the likes of Ilhan Omar into your hotel. She is a danger to American society and your hotel. You are not to allow her foot into there if you value your own safety. Do not allow her in there. Cancel the event.”

Omar was also on the hit list of a Coast Guard lieutenant who was arrested in February for stockpiling weapons in order to take out Trump’s political enemies.

Wigged out by the Hijab

The cynicism of the backlash against Omar was laid bare by Trump on Monday. The crux of the argument against her was that she was using an anti-Semitic canard and was accusing Jewish American pro-Israel lobbyists of dual loyalty. Of course, many of them will outright admit their allegiance to Israel first, but Omar never made that critique in the first place. Trump did, however, echo that accusation when, in front of his Jewish-American audience, he called Benjamin Netanyahu “Your Prime Minister.”

But the heat that Omar has faced was never about her critique of Israel — or at least, it was not mainly about it. Omar is not the first prominent politician to challenge Zionism or its methods of shoring up support in the U.S. She is, however, the first Hijabi in Congress. Pirro was speaking for a number of fellow Islamophobes in the media or otherwise in power when she accused Omar, for that very reason, of running afoul of the American Constitution.

0 thoughts on “Are Death Threats the New Norm for Zionists and the Rampaging Right?”