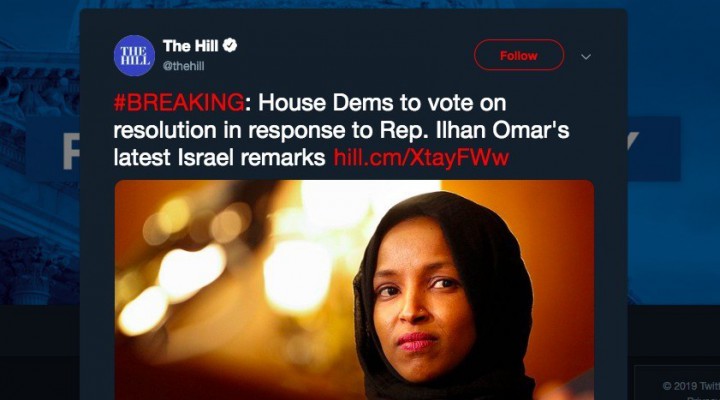 In response to criticisms made by Congresswoman Ilhan Omar that US political leaders have too much allegiance to Israel and its lobbying groups, House Democrats have put forward an entire House resolution in accordance with demands made by AIPAC and the Anti-Defamation League.

“The backlash [over Omar’s comments] continued on Monday, as the Anti-Defamation League wrote a letter to Pelosi calling for a House resolution to specifically reject what the organization calls Omar’s ‘latest slur,’” Politico reports. “‘We urge you and your colleagues to send the unambiguous message that the United States Congress is no place for hate,’ the group’s CEO, Jonathan Greenblatt, wrote in a letter.”

“The charge of dual loyalty not only raises the ominous specter of classic anti-Semitism, but it is also deeply insulting to the millions upon millions of patriotic Americans, Jewish and non-Jewish, who stand by our democratic ally, Israel,” tweeted the Israel lobbying group AIPAC on Friday in response to Omar’s comments.

“I hope @AIPAC isn’t too angry that it took Democratic House leaders almost 48 whole hours to do what they’re told to condemn their own member and will instead be understanding that it was a weekend and that’s what caused the delay,” snarked journalist Glenn Greenwald in response to the news of the House resolution. 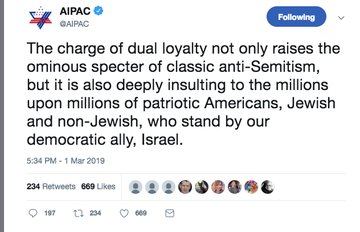 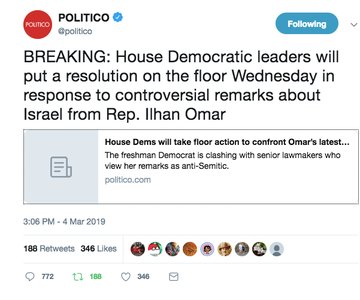 I hope @AIPAC isn’t too angry that it took Democratic House leaders almost 48 whole hours to do what they’re told to condem their own member and will instead be understanding that it was a weekend and that’s what caused the delay. They’re very sorry:

US politicians of all faiths and in both parties have indeed been falling all over themselves in a mad scramble to tell the freshman congresswoman that she is wrong and evil for suggesting that there is undue loyalty to Israel among US politicians.

“But serious question: How is it anti-Semitic to question Christian Republican allegiance to Israel?” asked journalist Rania Khalek in response to the controversy. “Because it’s people like Rep. Kevin McCarthy and Sen. Marco Rubio who Ilhan Omar and Rashida Tlaib were initially called anti-Semitic for challenging on loyalty to Israel.”

Whereas the definition further includes ‘‘accusing Jewish citizens of being more loyal to Israel, or to the alleged priorities of Jews worldwide, than to the interests of their own nations’’;

Whereas the myth of dual loyalty, including allegations that Jews should be suspected of being disloyal neighbors or citizens, has been used to marginalize and persecute the Jewish people for centuries for being a stateless minority;

Whereas accusing Jews of dual loyalty because they support Israel, whether out of a religious connection, a commitment to Jewish self-determination after millennia of persecution, or an appreciation for shared values and interests, suggests that Jews cannot be patriotic Americans and trusted neighbors, when Jews have served our Nation since its founding, whether in public life or military service;

Whereas accusations of dual loyalty generally have an insidious, bigoted history, including (1) the discriminatory internment of Americans of Japanese descent during World War II on the basis of race; (2) the Dreyfuss affair; when Alfred Dreyfuss, a Jewish French artillery captain was falsely convicted of passing secrets to Germany based on his Jewish background; (3) when the loyalty of President John F. Kennedy was questioned because of his Catholic faith; and (4) the post-9/11 conditions faced by Muslim-Americans in the United States, including unfounded, vicious attacks on and threats to Muslim-American Members of Congress; 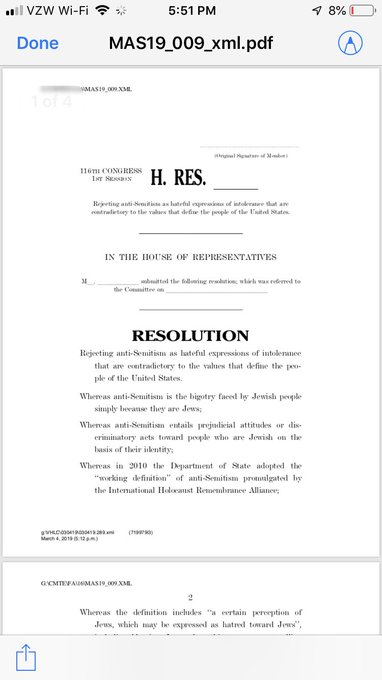 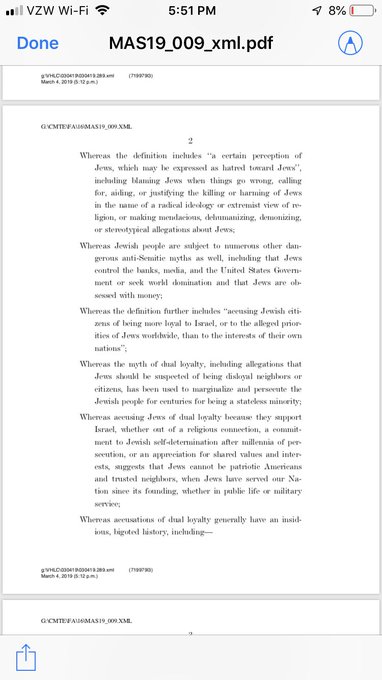 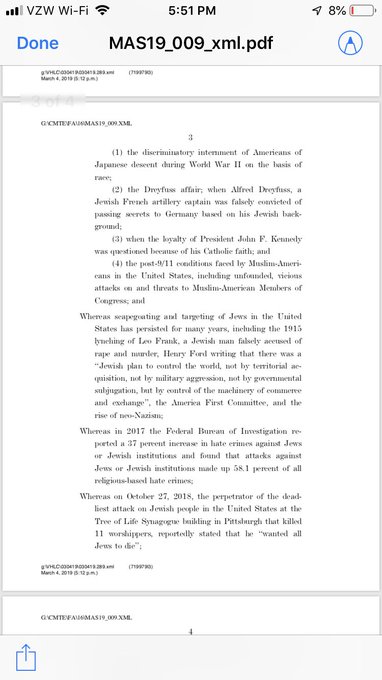 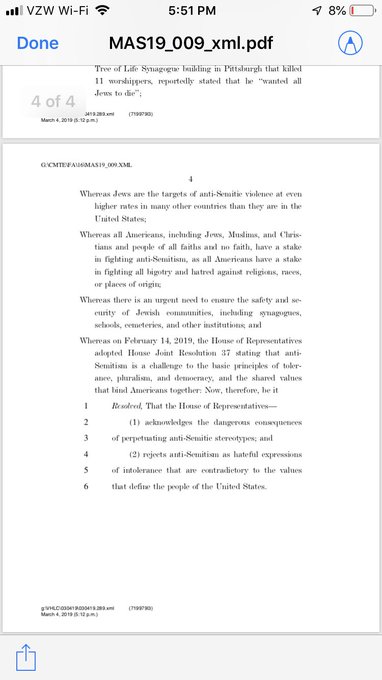 Omar’s comments have nothing to do with Jews, Judaism or Jewishness, but with the geopolitical entanglements between the US and a nation which currently serves as an outpost for US military agendas in the Middle East. It’s a basic, unassailable fact that the agenda to maintain this relationship holds immense sway in America’s capitol, which is why the only arguments you see against it are fallacious, dishonest, irrelevant, or even prove it to be true.

“It is so disingenuous of some of these members of Congress who are lining up to condemn these questioning voices as if they have no campaign finance interest in the outcome,” former congressman Brian Baird told the New York Times today. “If one dares to criticize Israel or dares to criticize AIPAC, one gets branded anti-Semitic, and that’s a danger to a democratic republic.”

Ilhan Omar has sparked one of the most interesting conversations happening in America today, and the smear campaign against her has nothing to do with fighting antisemitism, but with silencing that conversation. The social engineers are not interested in fighting religious bigotry, they are interested in shutting her up.

In an increasingly neoliberalism-weary world, the old smear tactics of labeling a dissident voice a “communist” or a “socialist” don’t pack the kind of punching power they used to, so new ones are needed. The propagandists have been field testing them for a while now, and whenever a successful prototype rolls off the conveyor belt you quickly see it shipped around the world. Smears of Kremlin servitude found purchase in the US, and it wasn’t long before we saw the BBC posing an image of Labour leader Jeremy Corbyn against the backdrop of the Kremlin wearing what was made to resemble a Soviet-era hat. Antisemitism smears found purchase against Corbyn in the UK, and it wasn’t long before we saw those same smear tactics used across the pond against Ilhan Omar. If an imperial smear field tests well in our new political climate, you can be certain you’ll see it used elsewhere within the empire before long.

It’s cool and a sign of a healthy media culture that I apparently put more effort into fact checking tweets about what having a fetish for mimes is called than highly paid pundits do before smearing politicians pic.twitter.com/REAGgEEIQH

This bogus concern trolling about antisemitism has always been about smearing, and the smearing has always been about narrative control. If they can manipulate the public into distrusting someone who voices a dissenting narrative, they can keep that dissenting narrative from entering the bloodstream of mainstream consciousness. The need to keep a nuclear-armed branch of the US-centralized empire in the heart of the most crucial strategic location on earth is too important for our rulers to allow its fate to be left in the hands of the democratic process, so they control the narrative about it with extreme aggression and smear anyone who questions it. That’s all this has ever been.