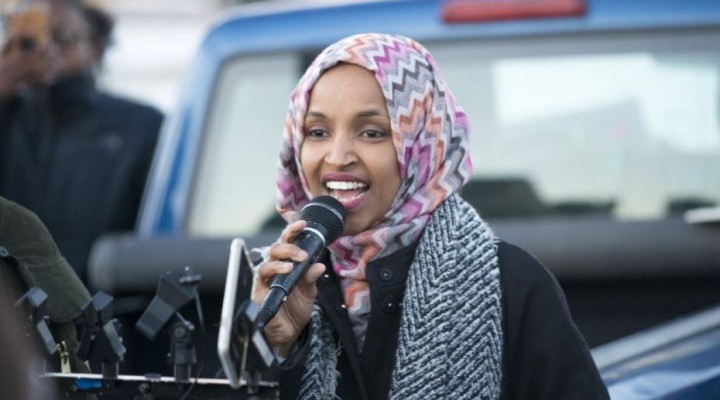 Omar is merely the latest in a long line of US politicians who have faced the onslaught of Israel’s powerful lobbying vise grip in Washington.

Freshman US Representative Ilhan Omar, Democrat of Minnesota and a Somali-American Muslim, is not the first nor will she be the last victim of Zion’s sting. Omar is merely the latest in a long line of US politicians who have faced the onslaught of Israel’s powerful lobbying vise grip in Washington. In fact, long before there was a state of Israel, American presidents and statesmen fell victim to the power of political Zionism to retaliate against those who failed to back the concept of a Jewish homeland in the Middle East.

On March 5, 1891, President Benjamin Harrison received a visitor to the White House bearing a petition signed by 421 influential American citizens urging the president to recognize Palestine as the “restored” homeland of the Jewish people. The bearer of the petition, evangelical Christian clergyman William E. Blackstone was one of the earliest “Christian Zionists” in proclaiming solidarity with certain Jewish Zionists in support of a Jewish state in the Holy Land. Blackstone was no different than many of today’s Zionists who ensure total fealty of US administrations to Israeli policy, no matter how reprehensible it may be, especially toward the Palestinian people. Blackstone’s petition had been signed by John D. Rockefeller, J.P. Morgan, US Supreme Court Chief Justice Melville Fuller, Speaker of the US House of Representatives Thomas Reed, inventor Cyrus McCormick, co-owner and managing editor of The Chicago Tribune Joseph Medill, Chairman of the House Foreign Affairs Committee Robert Hitt, and US Representative and future president William McKinley.

Blackstone, then the chairman of the Conference of Christians and Jews, wrote in his petition that the Ottoman Empire, which had control over Palestine, could be enticed into handing the territory over to Jewish control through the “funding of a portion of the [Ottoman] National debt by rich Jewish bankers.” Such a clause, today, would result in the same howls of “anti-Semitism” that are being directed at Omar because of her statement that pro-Israel lobbying groups, like the American Israel Public Affairs Committee (AIPAC), ensure congressional support for Israel by showering members of Congress and candidates with “benjamins,” a reference to US$100 bills.

Harrison, who was president from 1889 to 1893, was polite to Blackstone and promised to give his petition “careful attention.” Harrison, who had his hands full with civil service reform, the tariff debate, the gold versus silver standard for US currency, voting rights for African-Americans in the South, a US-backed coup in Hawaii, and the death of his wife from tuberculosis, slid the Blackstone petition into a “dead file.” Harrison did name a special commission to Russia to investigate anti-Jewish pogroms taking place in the country, urging Congress to condemn the actions of the czar.

Harrison’s inaction on Palestine contributed to his defeat in the 1892 election by his predecessor, Democrat Grover Cleveland. Cleveland was viewed as a safer bet for Zionism because of his denouncement of Austria-Hungary during his first term. The Habsburg emperor refused to accept the credentials of the US Minister-designate to Vienna, John Kieley, because Kieley’s wife was Jewish.

In 2009, AIPAC went to battle stations over a House letter, signed by 54 members, urging President Obama to pressure Israel to lift the inhumane blockade of Gaza. The signatories immediately were called the “anti-Semitic Hamas 54” by AIPAC and their propaganda ciphers at Fox “News” and hate talk radio. In fact, the signatories included two Jewish Democratic members, Bob Filner and John Yarmuth.

Over the years, AIPAC has sought to bring down several politicians who, to varying degrees, criticized Israel. AIPAC, a right-wing organization, put out the word that while the signatures of “pro-Hamas” members like Keith Ellison of Minnesota, America’s first Muslim congressman; Jim McDermott of Washington state (retired); incumbent Barbara Lee of California, and Jim Moran of Virginia(retired after being stripped of House seniority committee assignments) were no surprise, others had to be punished for their criticism of Israel over Gaza. AIPAC smeared “pro-Council on American-Islamic Relations (CAIR)” members like Representatives Carolyn Kilpatrick of Michigan (defeated); Nick Rahall of West Virginia (defeated); Eric Massa of New York (resigned amid a targeted and manufactured scandal concocted with the connivance of AIPAC loyalist Representative Barney Frank; Pete Stark of California (defeated); and Diane Watson of California (retired) and “pro-Islamic sharia” members like William Delahunt of Massachusetts (retired) and John Dingell of Michigan (retired).

America’s political road is littered with those who dared challenge political Zionism’s influence over the American political scene: Democrats and Republicans like Secretary of State and US ambassador to the United Nations Edward Stettinius Jr. (resigned as ambassador over President Harry Truman’s pro-Zionist policies); Senator Arthur Vandenberg of Michigan (failed to secure Republican presidential nomination in 1940 and 1948); New York Governor Thomas E. Dewey (defeated in the 1948 presidential election), Senator J. William Fulbright of Arkansas (defeated), Pennsylvania Governor William Scranton (lost the 1964 GOP presidential nomination), Illinois Senator Charles Percy (defeated), Iowa Senator Roger Jepsen (defeated), Illinois Senator Adlai Stevenson III (retired), Stevenson’s father, Illinois Governor Adlai Stevenson II and twice Democratic presidential candidate, who, in 1955, said of Israeli designs on its neighbors’ lands, “I quietly asserted that it should be the policy of this government not to permit any change in the status quo by force – and the more noisy Zionists have been denouncing me as a traitor ever since, and, frankly, I’m getting damned well fed up with it… Moreover, I’m about the only leading Democrat left with whom Arabs will still talk in confidence.” (defeated twice for the US presidency by Dwight D. Eisenhower, who the Zionists also criticized for failing to back Israel in its 1956 invasion of Sinai and the Suez Canal); President John F. Kennedy, who criticized Israel’s pursuit of nuclear weapons in heated exchanges with Prime Ministers David Ben-Gurion and Levi Eshkol (assassinated in 1963); Arizona Senator Barry Goldwater, who, in 1986, in answer to a question that asked, “Is the Israel Lobby too powerful?” replied, “God, yes, way too powerful!” (defeated for president in 1964, retired from the Senate); Alaska Senator Mike Gravel (defeated in Senate primary); Illinois Representative Paul Findlay, who wrote an excellent book on AIPAC’s influence over American politics, “They Dare to Speak Out,” (defeated), South Dakota Senator James Abdnor (defeated), South Dakota Senator James Abourezk (retired), President Jimmy Carter (defeated), California Representative Pete McCloskey (defeated in Senate primary), Ohio Representative James Traficant (indicted and expelled from the House), Alabama Representative Earl Hilliard (defeated), Texas Representative Ron Paul (retired); Senator Chuck Hagel of Nebraska (retired from the Senate but faced a contentious Senate confirmation hearing for Secretary of Defense based on his comments about the power of the Israel Lobby, and Georgia Representative Cynthia McKinney (defeated).

Those who opposed the Israel Lobby and placed America’s interests ahead of Israel’s were punished politically. However, all of those who stood up to Israel’s arrogance of power in Washington represented a cross section of the American people: Democrats and Republicans, libertarians and democratic socialists, whites and African-Americans, Gentiles and Jews, and those from the Northeast, South, Midwest, and West. Saying no to bullies is an American trait that should be revered and not condemned by those who now find it sporting to take cheap political pot shots at Congresswomen Omar, Tlaib, and Ocasio-Cortez.