HOME / WORLD / War it is – and escalation is coming

War it is – and escalation is coming 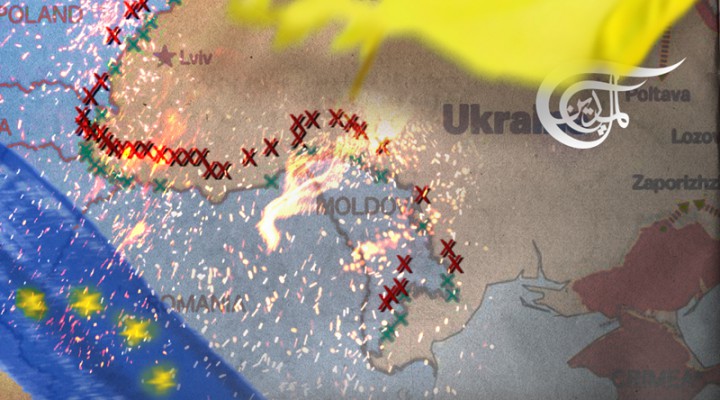 ‘War is war’, and this war is set to escalate.

It is indeed war. NATO is at war with Russia. German legalists may say not, but when the West arms Ukraine; when NATO Special Forces are in Kiev (i.e. the British SAS), and are training their militia protégés to use their weapons to kill Russians, is it really relevant (or known) from whose shoulder the (UK made) Starstreak missile, which downs a Russian helicopter, is fired?

In any case, this ‘war’ (proxy war, if you prefer) was effectively launched in 2014, and ratcheted up substantially in 2017, when NATO switched from relying on Ukrainian national forces (that had proved somewhat prone to defects, with their arms, to Russian speaking militia), to the use of internationalists and mercenaries, with the aggressive intent of weakening and miring Russia in a quagmire.

‘War is war’, and this war is set to escalate.

Nobody knows exactly the number of these extreme Right militias mounted by the West, but Reuters has put the figure at one hundred thousand, former senior NATO adviser Jacques Baud notes and concurs. These paramilitaries, however, take no role in normal field warfare, but rather focus on maintaining ‘order’ [i.e. strict compliance] within cities. And that’s exactly what you have had in Mariupol and elsewhere. These Azov-type militia are not equipped for field operations. They are equipped for urban warfare. Just to be clear, this mode of Idlib-style ruthless urban warfare is not about defeating the Russian army, it is about pulling them into cloying, all-enveloping mud.

Up until February this year, this set-up essentially was intended to unfold as a campaign of attrition; an incipient quagmire.  But then suddenly, on 16 February, there was a massive increase in shelling from the Ukrainian side (about 30 times more than on past occasions per OSCE) and coinciding with Biden’s predictions of an imminent Russian invasion. This for the Russians, and for President Putin in particular, was the sign of the start of the expected war of attrition. And so on 24 February, Russia’s Special Military Operation was launched.

Why attrition?  Why not ordinary war?  Well, because NATO did not want to put its’ boots on the ground. It wanted low-intensity insurgency.

Why? Because it had been decided that the collapse of Russia (the ultimate aim) was primordially to be achieved by all-out financial war (thus avoiding US casualties): Thousands of sanctions; the seizing of Russian foreign exchange reserves; and a concerted effort to sink the rouble.  In March, Biden was already boasting in his State of the Union speech that the rouble had collapsed by 30% and the Russian stock market by 40%. The fighting in Ukraine, therefore, was treated as giving the pain from financial war more time to bite in Russia.

But now, we see the calculus is changing. Indeed it must change, because the dynamics and timelines are inverting:

First, Russia’s economy did not collapse. The rouble is back to where it was before 24 February. Then subsequently, the West unfurled its unprecedented anti-Putin PSYOPS amid almost daily claims of atrocities and war-crimes attributed to Russia.

The PSYOPS war has completely infused the European public with a passionate animosity and hatred for Putin and Russian persons. There is no doubt about ‘its success’ in this respect.

But there seems to have been a less noticed Anglo-American sub-plot too: This sub-plot is the weakening of Germany, and the blocking of Germany from allying with Russia — for at least a generation. This latter aspiration is well-established and has existed since before WW1.

As Ambrose Evans-Pritchard wrote in the Telegraph this week, “Olaf Scholz must choose between an energy embargo on Russia, or a moral embargo on Germany”: “…[W]estern Europe’s refusal to cut off funding for Vladimir Putin’s war machine is untenable. The moral and political damage to the EU itself is becoming prohibitive”.

But note the corollary: To push for this EU energy embargo, Britain is turbo-firing the stakes by demanding a western “response that rises to the existential threat now facing Europe’s liberal order”.

So, here is the revised grand agenda: Russia is surviving the financial war because the EU still buys gas and energy from Russia. ‘The EU – and Germany more specifically – is financing Putin’s ‘grotesque unprovoked war’, the meme goes. ‘Not a Euro must reach Putin!’.

Is this not simply an evolution of the West’s February aims?  No. For, a ‘boycott-Russian-energy’ strategy is not about giving the ‘Treasury War’ time to bear fruit, but rather, it means ‘curtains for Europe’ of course, and for Germany very obviously. And soon.

There is no way for Europe to replace Russian energy from other sources in the coming years. But Europe’s leadership, consumed by a frenzy of outrage at a flood of atrocity images from Ukraine – and a sense that the ‘liberal world’ at any cost must prevent a loss in the Ukraine conflict – seems ready to go this ‘whole hog’. The energy ban may happen quite soon.

But, here is the rub: The US can see that its attrition ‘war’ is failing. Ukraine’s army is surrounded, and will soon come to an end (one way or another).

Thus, it is no longer a question of whether the war of attrition can give sanctions more time to bite with the Russian populace. The Treasury War is failing, too (for complex reasons to do with the Bank of Russia linking the rouble to gold; and the rouble to energy).

Here again, it is the economic/financial consequences that are the game-changer. Inflation is soaring in Europe, and will go higher. And the public sentiment is shifting: “Public support for Russian sanctions is falling as the cost of living crisis starts to bite, a poll has found. The proportion of the public that would accept higher fuel prices as a consequence of tough Western sanctions on Russia fell 14 points in a month, from 50 percent in March to 36 percent this week”.

The timelines no longer gel: Euro-sanctions (theoretically) need more time to bite. However, the West does not have time. It is inflation that is biting ‘now’ (and turning European sentiment against the Ukraine project). The last thing wanted by the European establishment is a ‘European Spring’ (as a counterpoint to the Arab Spring).

The West faces a tough choice: Public support for the Ukraine project may be fading, just as the realities on the ground become apparent that the ‘European Liberal Order’ is not going to be saved from disintegration – through Ukraine.

Yet, public opinion has been hyped to believe that without a European Ukraine victory; without the utter defeat and humiliation of Russia, the liberal world cannot survive. Thus, we hear slipping from the lips of EU High Representative Borrell that Ukraine can only be resolved by military means. What he may be saying is that the West must go maximalist, before inflation ruins the plan.  Escalation, or else existential failure.

The War in Ukraine and the Collapsing World Order

The Goal of the Ukraine Conflict is to Economically Collapse Europe

0 thoughts on “War it is – and escalation is coming”