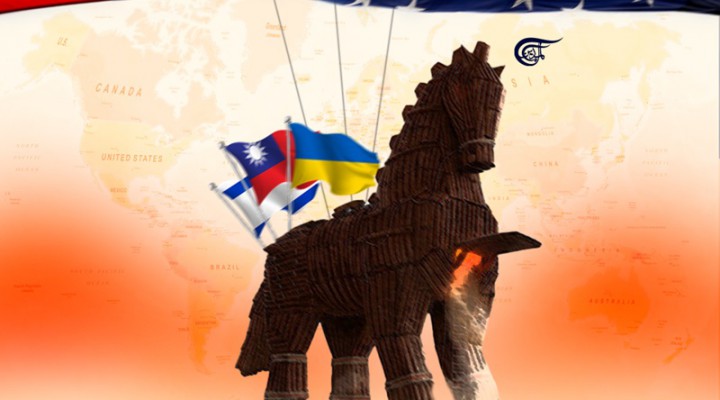 US neo-cons have always had a knack for hitching their undiluted authoritarian projects to whatever the latest cult western ‘virtue’ sloganeering.

On 24 June, at the Hudson Institute in Washington, Mike Pompeo gave a foreign policy speech entitled The Three Lighthouses – painting Taiwan, Ukraine and “Israel” as ‘beacons of freedom’. US neo-cons have always had a knack for hitching their undiluted authoritarian projects to whatever the latest cult western ‘virtue’ sloganeering, and thus manage to set a media narrative.

Since the early days of Covid, the words vulnerability, solidarity and care that have been in circulation amongst ‘performatively compassionate’ élites in respect to the biomedical régime were consolidated into a broader narrative for bullying the public into compliance with novel ‘sacrifice politics’. That is to say, ‘to be ready and willing to sacrifice your freedoms, to protect vulnerable groups: That is our solidarity … Your individual freedom ends, where collective freedom begins’.

What cant from Pompeo to use protecting ‘freedom’ amongst this group of ‘vulnerable Lighthouses’ aims to disguise a neo-conservative project which has caused the loss of life, loss of rights, loss of income, and psychological damage to many of those living adjacent to these Lighthouse ‘Trojan’ horses. Of course, “protecting the vulnerable” by destroying others’ livelihoods and lives was always an illogical proposition. Its true aim is merely to rally public support for belligerent action against Chinese, Russian and Iranian strengths.

And yet, in Pompeo’s awkward linguistic formulation, there lies the kernel of an obverse linkage between the three: Speaker Pelosi’s visit to Taipei has awakened the slumbering Dragon. It now sees clearly the parallels between Taiwan and Ukraine. Since the beginning of the 20th Century, the West established several extraterritorial jurisdictions (the Concessions) inside of China that served to fragment and weaken it.

Beijing sees now that the US intends to do everything possible to ensure that a peaceful reunification of Taiwan with the Mainland never takes place, and that today’s US policy is but an extension of an old colonial strategy.

This has lent China a better understanding of the Ukraine issue: Where the West since the early 20th Century sought to leverage hard-right ethnic Ukrainian nationalism against culturally-Russian Ukrainians, in order to weaken Russia.

Like China towards Taiwan, Moscow understood that the US and its European allies would do everything possible to forestall any peaceful unification of the diverse peoples of this borderland region (as the Minsk Accords had aimed to do).

The Chinese response to the Pelosi visit has been “that the noose around the neck of Taiwan’s independence” will be tightened, tighter and tighter, as Minister Wang Yi warned, adding “there is no room for compromise” on this matter.

Li Fei, a Professor at Xiamen University, has conceptualized what he calls ‘the Peking model’ that has given Beijing a notion of ‘smart reunification’ — an approach that combines peaceful efforts and military strength. Such an approach needs to be carried out step by step, and normalizing the current military drills around the island is one step forward. If ‘smart reunification’ still cannot realize our final goal, he added, a more direct approach based on strength will be needed. (In January 1949, the PLA encircled Peking, which was then occupied by the KMT forces, and eventually forced the KMT commanders to surrender, so the liberation of the city indeed did occur peacefully …).

Well … Russia, step by step, is incrementally tightening the noose around the neck of the post-Maidan, NATO-trained army in Ukraine. If a solution does not emerge organically from the feel of the rope on the neck, that ‘knot’ too will be tightened.

This brings us to the third of Pompeo’s ‘Trojan’ Lighthouses — “Israel”. Iran and many others understand that the US does not wish to see the Middle East united. The collective West rather sees a fragmented, polarised region, divided by sect and the Palestinian issue as the path to weakening Iran and its allies.

Hence, Iran’s response. Step by step, Iran and its allies have been incrementally tightening the noose around “Israel”, from four separate points on the compass. The EU has rushed to save the Iran containment mechanism – the JCPOA – even though Iran is now a ‘threshold’ nuclear power, and could in a relatively short timescale, build a weapon – should it so decide (which it hasn’t).

Admiral Shamkhani told members of Iran’s National Security Commission of Parliament that Iran too could afford to go slowly, step by step. Iran can afford to say yea or nay to the EU’s allegedly final, ‘final’ proposal, and confirm that Iran will not depart from its ‘red-lines’.

After all, Iran is selling its oil and generating substantial income, whilst the Middle East, Asia and the Global South are undergoing a revolutionary geo-political metamorphosis.  The political landscape is consolidating into an autonomous, anti-Global Order sphere. And the West Asian economic paradigm too, stands at the brink of transformation with the advent of a new trading and financial clearing system in gestation.

In sum, Iran doesn’t have explicitly to tighten the noose at this moment. A new, broad-tent geo-strategic architecture led by Moscow, that is being drawn across the Region, is doing that fine for Iran anyway.

2 thoughts on “The three ‘Trojan’ lighthouses feel the rope tighten”