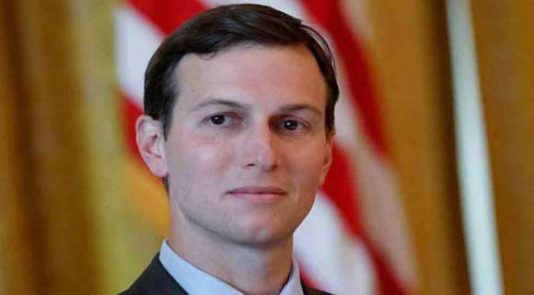 Only one conclusion can be drawn from Tuesday’s announcement in Washington that Jared Kushner, President Donald Trump’s son-in-law and architect of his Middle East ‘Deal of the Century’, will visit Morocco, Jordan and the occupied Palestinian territories this week. Coming just days before the successive Gulf, Arab and Islamic summits that are due to be held in Mecca, it means the Deal has faced a wall of Arab and Islamic rejection, and that next month’s conference in the Bahraini capital Manama on enacting its economic provisions is in trouble. The visit is a last-ditch attempt to throw all the US’ clout behind a bid to salvage both, and it will probably prove futile.

Kushner will head a delegation including the president’s sidekick and Middle East envoy Jason Greenblatt and his special representative for Iran, Brian Hook. He is likely to convey messages designed to threaten and put pressure on Jordan and Morocco to force them to attend the Manama gathering aimed at trading off and liquidating the Palestinian cause – a goal he believes can be achieved with money and investments.

We do not know who tasked Kushner with this criminal undertaking, or how he ever imagined it could succeed. Palestine is not a real estate deal, and its steadfast people are never going to sell out to the dubious offers of patently dishonest brokers or to their allies’ billions.

Kushner and his clique are mistaken if they think the Palestinians can be forced to submit by using blockades and aid cut-offs to starve them, nor by Israeli warplanes, missiles and mass killings, or by bankrupting the UN refugee agency UNRWA. It only shows their ignorance. They know nothing about the Palestinians or their stubborn adherence to their rights, their unshakeable belief in the justice of their cause, and their willingness to sacrifice for it.

Kushner, his father-in-law Trump, his hard-line Zionist entourage and his mentor Benjamin Netanyahu imagine that the Palestinian are waiting with bated breath for their cash bribes and promised development projects, and will meekly grovel at their feet and comply with all their demands, just as some of their Gulf allies do. They are about to discover how deluded they are. They are incapable of understanding that the Palestinians along with the vast majority of Arabs and Muslims have dignity and self-respect and that the handful of Arab regimes that have been kowtowing to the US and normalizing relations with Israel are unrepresentative – and will inevitably face their comeuppance one day.

The Palestinians don’t want the ‘prosperity’ promised them by Kushner and his Deal, and never asked for it in the first place. What prosperity can there possibly be under occupation, or come from surrendering their basic rights and giving up their country, in its entirety, for a fistful of toxic dollars?

Palestinian President Mahmoud Abbas dealt the coup de grace to the Deal of the Century when he called on Monday for a boycott of Kushner’s Bahrain conference. He told a rally that the PLO would never accept the outcome of the meeting because its organisers were selling illusions, and plainly advised the organisers and their conference to ‘go to hell’.

Both the conference and Kushner’s tour are doomed to failure. One need only see the ferocious reaction on Jordanian social media when a lone MP, Fawwaz Zoubi, tweeted that the Deal of the Century might be good for Jordan. The Jordanian public is well aware that this poisoned deal is the prelude to the establishment of Greater Israel, to the detriment of Jordan and the entire Arab world. The feeling is shared throughout the region. Western observers should not allow themselves to be misled by the submissiveness and collusion of a few Arab governments.