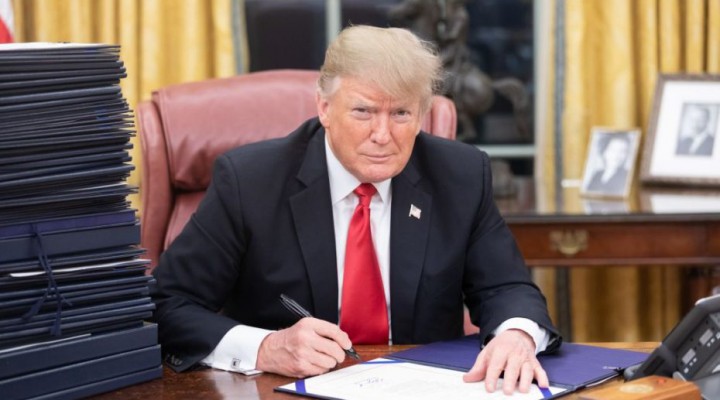 The question is: can Trump’s instinctive, creative ambiguity hold the line of US credibility (which exists more in the eye of the domestic beholder?)

“Trump has blown the lid off. This is not going to go away. There is going to be a Nationalist alternative to [American] foreign policy; I don’t think you can just put it back in a box.” Professor Colin Dueck who has written a book on US foreign policy suggests: “The neoconservative and noninterventionist wings of the Republican party have long sought to take ownership of — and thence to shape — Trump’s unpredictable foreign policy. But the president simply has refused to fit into either mould:”

“He found a kind of the middle position, and that turned out to be the single most popular position in the Republican primary,” says Dueck: “I don’t think there was an established school of thought. He has certainly created a new position that did not exist before.” Dueck calls it middle lane nationalism.

He created space for these ostensibly competing Republican instincts. Another commentator suggests that this “instinctive and shoot-from-the-hip foreign policy style, may become the ‘new normal’ in what security experts say is an increasingly unsettled global threat environment.”

The point here, is that whilst this ‘give’ a little to one side of the policy debate, and then to offer a titbit to the other, may well serve the domestic US audience, it does not do anything to acknowledge global change. US defence policy hardly has evolved over the years – and despite rhetorical re-packaging, it still remains rooted in old-style, ‘big power-big military’, full-on, clashes. This is where the money is, of course, for the military-industrial complex. Similarly, US weaponry has failed to keep up. Again, the ‘big ticket’ items are where the money is. (‘show sales’ to gullible foreign states, rather than re-tool for a new, small-is-better, era).

So the question is, ‘can Trump’s instinctive, creative ambiguity’ hold the line of US ‘credibility’ (which exists more in the eye of the domestic beholder, than for the foreign one)? Can his idiosyncratic policy continue to survive the sealed retort of the US foreign policy machine — a zeitgeist stuck fast – when others’ surely have (i.e. the Russian deck of new weaponry, that has rendered obsolete traditional navies)?

We have been given examples of other evolutions (and startling innovation), amongst America’s challengers in recent weeks. In fact, we can see an ‘alternative’ conflict paradigm taking shape: Firstly, with the 15 September strikes on two Saudi Crude processing plants, of crucial importance to the overall infrastructure of Saudi Arabia’s oil infrastructure. And secondly, by the extraordinary rout of three brigades of the Saudi armed forces (some of them from the élite National Guard) – by AnsarAllah (composed of Houthi, and loyalist Yemeni army elements).

Both actions were well planned, well researched, well executed and sophisticated. Together, they shattered any credibility lingering around the notion of Saudi having any military stature; they imploded the image of America’s ‘security umbrella’; and overturned US and Israeli smug assumptions about ‘rag-tag’ forces in the Region. They all must analyse afresh (after eating humble pie).

The delivery of precise strikes – a mix of drones and cruise missiles – on the Aramco facilities, guarded by an American-supplied air defence system, represents a novel, effective (and wholly inexpensive) attack strategy. How come, for starters, the Saudi missile defences did not work? Did the drones manage to blind the targeting radar; or was some form of electronic warfare (EW) deployed? Is the regional EW better than America’s now?

We are dealing here – it seems – with the Houthis using a new attack paradigm, a new mode of warfare: Some of these latter elements (attacks on oil infrastructure and tankers), seem remarkably consistent with concepts first identified by Russian military theorists Igor Popov and Musa Khamsatov in 2016, as a ‘system-network warfare’, (sistemno-setevaya voyna) in their book: The Future of War.

In this system-network notion, “the entire State and its society should be viewed as a system consisting of critical ‘nodes’, whose destruction would profoundly affect the defense potential [of the whole system], and therefore is likely to lead to a victory with relatively limited commitment from challengers. There would be no need to fight against all military forces of the adversary, nor [to fight against] the whole population. It would be enough just to destroy the ‘centers of gravity’.

Accordingly, the main drivers in such a war, would be what the authors call an “amorphous adversary,” whose “key structural elements and subsistence systems are located, not on one’s own territory; but rather, in the states of ‘near and far-abroad’: Territories or entities that formally are not party to the conflict […] This makes it very hard to point a finger at the real culprit.” That is to say, it provides plausible deniability – and spreads confusion and unease.

This seems to fit the model now being deployed jointly by the Houthis, Iran, the Hash’d al-Shaabi and Hisbullah. It is a model that can be deployed widely, and in differing contexts. But in the context of the Gulf, it signals that any large civilian infrastructure object, including energy, water and transport infrastructure can no longer be regarded as completely safe to Houthi retribution. The Gulf energy-risk calculus needs to be re-visited.

The point about paradigm change is well underlined in a unique interview given by Maj. General Qassem Soleimani, the Commander of the Quds Brigade. He outlines the ‘before’ situation (in the wake of 9/11). Massive US forces were deployed across the Middle East, and in Afghanistan. It was a daunting presence to its inhabitants; and it was clearly intended as the precursor to Condi Rice’s promise of coming painful ‘birth pangs to a New Middle East’. The West then, was cohesive and single-minded.

As Soleimani describes it, these widespread occupations served to give the US and Israel the latitude to contemplate an attack on Hizbullah, sufficient to force the displacement of the Shia population of Lebanon out of the South and into distant refugee camps – far from the Israeli border. (The 2006 war failed to achieve this aim). The psychological impact of this US dispersion, plus Israel’s 2006 precision bombing of Shia areas however, had its effect, Soleimani suggests. For the first time, Arab States sided with a foreign power against a significant Arab constituency (Hizbullah).

Compare that, with the situation with now (a comparison not offered by Soleimani): America’s wars were not successful – Hizbullah, Syria and Iraq all survived the onslaught. And are linked to the Iranian camp. The psychological climate has inverted: The US presence – then intimidating, now smacks of deep western cultural division, and policy uncertainty.

The US President now wants out of this troubled region. And instead, seeks to engage with his Iranian counterpart. Saudi Arabia, the former leader of the Iran-containment bloc, is being pressured by the White House to reach out to the Houthis and Iran. The other Gulf States have already made that switch, having assimilated the reality that the American ‘security umbrella’ offers no protection against system-network strategies.

What now? There are no easy answers to the military challenges posed to the US in the Middle East by amorphous opponents – other than the wearily standard, US military deterrent punishments that might plunge us into region-wide war. The next period may be crucial. The Houthis on the one hand, and Iran on the other, are likely to incrementally escalate counter-pressures – unless, that is, sanctions on Iran are lifted, and a settlement is reached in Yemen.

Really – Saudi has no option but to end its war on Yemen. It needs to monetise is its oil reserves (to fund Vision 2030) – and faced with the choice of monetising a whack of Aramco; or pursuing conflict with Iran, the outcome should be a ‘no brainer’. MbS already has begun to reach out to the Houthis and Iran; but can MbS survive the blow to his fading prestige, of capitulation to the Houthis? It is doubtful.

Trump probably will try to hold the line again, if there are yet further instances of ambiguously-sourced ‘system-network’ actions in the region? But, can he continue to hold out, as Iran periodically continues to ‘de-comply’ with the JCPOA? Trump has already been harshly criticised for eroding US ‘credibility’ through having not responded militarily to Iran (fingered by some in Washington as the source for the Aramco strikes). The pressures will be intense on a President entering the pre-election period.

And following the failure of Macron’s UNGA attempted mediation, it is unlikely that any mooted offers by the US President to ‘lift Iran sanctions’ will be viewed as being credible – with Congress locked into impeachment proceedings. The Democrats, who control US sanction legislation, will lend Trump no helping hand, on this, or any other issue, for time being.

In practice, Trump too, has few options: With Wall Street now having premonitions of US economic recession, Trump desperately needs an Art of the Deal success, (absent a buoyant US economy to claim as his own) – and certainly needs no Middle Eastern blunder (President Carter-style), to tarnish his Presidential candidature.

Yet, reason doesn’t always prevail. And, with Iran declining to meet him (absent the lifting of sanctions), Trump’s present path of hoping MbS or Imran Khan can network a meeting for him with Rouhani – does seem quite a stretch. And American neo-cons, as always, will be on the lookout for the opportunities that an impeachment-distracted President might offer, to seize control of policy.