HOME / Economy / World Bank: Up to 150 Million More People Will Live in Extreme Poverty by 2021 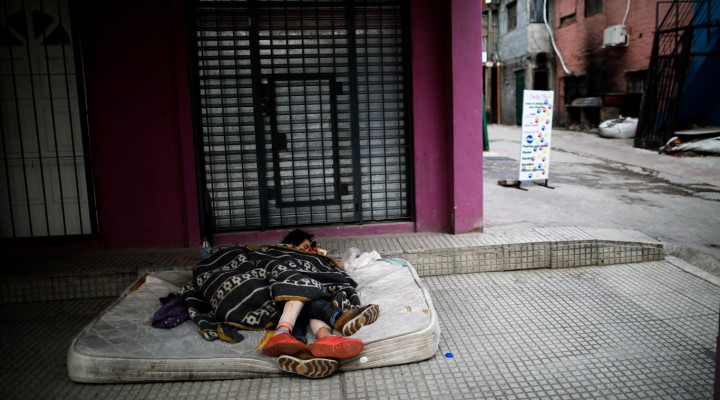 The convergence of the coronavirus, combined with global conflict and climate change has put the goal of ending global poverty by 2030 virtually out of sight.

MPN– A new report from the World Bank estimates that the number of people living in extreme poverty around the world will increase by between 88 and 150 million by 2021, thanks in part to the COVID-19 pandemic. This represents an increase in the number, calculated as those living on less than $1.90 per day, for the first time in 20 years, according to the World Bank, rising to nearly 10 percent of the global population. The convergence of the coronavirus pandemic, combined with global conflict and climate change has put the goal of ending global poverty by 2030 virtually out of sight, the report warned.

82 percent of those newly impoverished live in middle-income countries, as vast numbers of people around the world lose their jobs, either to lockdown measures or due to the economic fallout that will follow the pandemic.

Yet the working class in richer and poorer countries are also suffering the brunt of the impact of the virus. 56 million Americans (including well over a third of poor Americans) have been forced to rely on a food bank during the pandemic, according to Pew Research. And by late July, 54 million had filed for unemployment insurance after the economy was shut down in an attempt to deal with the virus’ spread. One third of Americans also had to take a pay cut.

Meanwhile, those in poor countries are faring even worse. In April, the World Food Program warned of a potentially massive global hunger epidemic as the world’s poorest would no longer be able to afford food to eat.

David Beasley, the World Food Program’s Director-General, spoke of “multiple famines of biblical proportions” emerging, primarily in Yemen and the Horn of Africa. Yet following pressure from the Trump administration, aid to Yemen has been cut to just 25 cents per person per day, less than half of what the United Nations estimates is needed.

Over 36 million people worldwide have tested positive for the coronavirus, and there have been over 1.068 million deaths, although this is likely a conservative estimate. The countries with the highest official death tolls are the United States, Brazil, India, and Mexico.

A boon for billionaires

At the same time, the coronavirus has been a boon to the world’s elite, with large businesses able to withstand the pressure and adapt better than small ones. Even as huge numbers of people have had their lives’ work destroyed, the wealth of the planet’s billionaires has increased by around one-third ($1.5 trillion) during the pandemic. Tesla and SpaceX CEO Elon Musk has seen his fortune more than triple to $92 billion, despite the fact that his California Tesla plant was temporarily shut down due to the virus’ spread.

“The World Bank’s report shows clearly that billions of people were more vulnerable to the economic impacts of COVID-19 because of decades of economic policies which have kept them living one paycheck away from poverty, while the richest in society accumulate ever more wealth,” wrote Oxfam.

While the global economic devastation from the coronavirus pandemic is not in doubt, the World Bank’s poverty numbers have long been a source of contention, with many alleging they intentionally fiddle with their definitions of poverty in order to falsely make it seem like progress is being made. For decades, the organization has moved the goalposts on what constitutes extreme poverty, not taking into account other factors like inflation. Furthermore, while $1.90 might be enough to live on in some of the world’s poorest countries, it is laughably inadequate for a nation like the United States. In 2005, the government itself calculated that $4.50 was the minimum needed merely to meet nutritional requirements alone. Others have calculated that the $1.90 figure is not enough to ensure a standard life expectancy, but that increasing the figure would undermine the idea that progress is being made in the fight against poverty. And when figures from China (a country that has not taken the same path as the one the World Bank recommends), worldwide poverty reduction figures look even worse.

Critics of the World Bank say the Washington-based organization is far too close to the U.S. government and has effectively become a weapon of imperialism, forcing countries to open up their economies to Western multinationals and privatize national assets in exchange for loans, and that their advice to developing countries has only increased the poverty and misery of the people, leading to “lost decades” of development. As Jo Erickson wrote in MintPress, World Bank policies are expressly about “benefiting the wealthy and making poor poorer.”

What Do the World Bank and IMF Really Do for Needy Countries? Add More Poverty

“The figures are a damning indictment of the failed economic policies that will push hundreds of millions more people into destitution during this pandemic. Urgent action must be taken to protect labor rights, boost social safety nets and deliver a fairer tax system to close the gap between the richest and the rest,” said Oxfam.

Feature photo | A homeless women sleep outside on a mattress in the “Villa 31” neighborhood during a government-ordered lockdown to curb the spread of the new coronavirus in Buenos Aires, Argentina. May 6, 2020. Natacha Pisarenko | AP

0 thoughts on “World Bank: Up to 150 Million More People Will Live in Extreme Poverty by 2021”