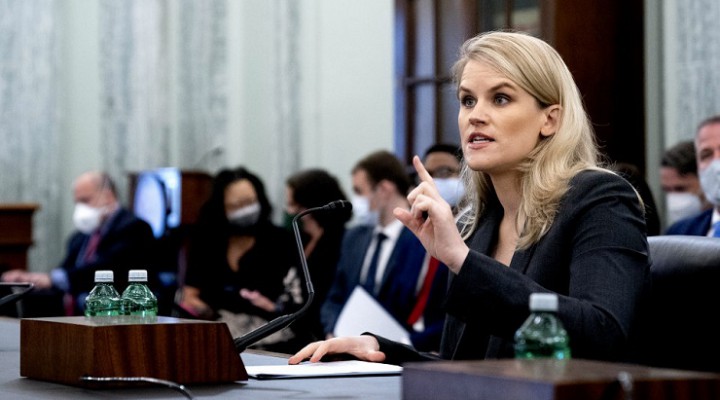 Another serious warning sign of Washington’s interest in expanding its campaign of global interference was sounded during a hearing in front of the US Congress featuring Facebook whistleblower Frances Haugen. While at face value it appears to be a promising step in the direction of reining in Facebook’s abusive monopoly over the flow of information and how people around the globe communicate with one another, upon closer inspection it is precisely the opposite.

In reality, Haugen’s testimony is prodding the US government and Facebook closer together ensuring that not only current abuses continue, but that they are actually expanded. This is not by chance, but rather completely by design. The impact this will have on US-based social media platforms and the enhanced threat they will soon pose to the information space of nations around the globe cannot be underestimated.

When considering who has been handling, coaching, protecting, and directing Haugen’s “whistleblowing” for the past year, this all becomes abundantly clear.

Haugen’s opening statement was a combination of hard truths about the very real damage Facebook and its various social media products are doing to society, mixed in with calls to actually expand Facebook’s involvement in regulating the flow of information – not only across America’s information space, but around the world.

It is likely no coincidence that Facebook’s real abuses were mentioned first and given the most attention, while calls for Facebook to become more involved with direct US government intervention in managing the information space of nations abroad being mentioned second.

I’m here today because I believe Facebook’s products, harm children, stoke division, and weaken our democracy. The company’s leadership knows how to make Facebook and Instagram safer, but won’t make the necessary changes because they have put their astronomical profits before people. Congressional action is needed. They won’t solve this crisis without your help.

With most people likely agreeing with Haugen up until this point, she would then end her opening statement by claiming (emphasis added):

These problems are solvable. A safer, free-speech respecting, more enjoyable social media is possible. But there is one thing that I hope everyone takes away from these disclosures, it is that Facebook can change, but is clearly not going to do so on its own. My fear is that without action, divisive and extremist behaviors we see today are only the beginning. What we saw in Myanmar and are now seen in Ethiopia are only the opening chapters of a story so terrifying no one wants to read the end of it.

It is the same bait-and-switch methodology Facebook used to attract hundreds of millions of users to its platform in the first place, offering the unfettered free flow of information to the global public before incrementally constricting the flow in ways that suited both Facebook and US special interests.

It was as early as 2011 when Facebook along with the US State Department began weaponizing this control over a social media platform deeply entrenched in the information spaces of nations around the world and particularly in the Arab World.

The New York Times in a 2011 article titled, “US Groups Helped Nurture Arab Uprisings,” would admit that the US government had funded many of the opposition groups years in advance to the Arab Spring, training and equipping them to overthrow their respective governments.

The article also mentions US tech companies and their role in US-sponsored subversion abroad, noting:

And while Haugen mentioned Myanmar, seemingly suggesting that Facebook had not done enough to bolster the US-sponsored opposition currently attempting to return itself to power there – Facebook along with Twitter and Google had executed a sweeping campaign of censorship to silence Myanmar’s military and current government from accessing social media in Myanmar’s own information space.

An official statement by Facebook regarding the situation in Myanmar would note:

Today, we are banning the remaining Myanmar military (“Tatmadaw”) and military-controlled state and media entities from Facebook and Instagram, as well as ads from military-linked commercial entities.

We’re continuing to treat the situation in Myanmar as an emergency and we remain focused on the safety of our community, and the people of Myanmar more broadly.

Events since the February 1 coup, including deadly violence, have precipitated a need for this ban. We believe the risks of allowing the Tatmadaw on Facebook and Instagram are too great.

Demonstrated is the extreme danger of allowing a foreign corporation to monopolize control over a nation’s own information space, particularly on popular social media platforms used not only for basic communication but also for business and sharing news.

Control over these conduits of information is similar to the control of communication lines in traditional, conventional warfare. A nation would never imagine allowing a foreign nation to control the physical telecommunication infrastructure that information uses to travel within a nation’s information space, yet so many nations – including Myanmar – depend on virtual infrastructure like social media platforms – controlled entirely by foreign and demonstrably hostile entities – to facilitate the exchange of information on a day to day basis.

Haugen’s inference that Facebook did not do enough in regards to Myanmar and Ethiopia is concerning – meaning she seeks to recruit the US government in enabling Facebook to meddle in the information spaces of nations abroad to an even higher degree than it already has.

Frances Haugen’s Handlers are Part of the Establishment, Not Threats to It

Haugen’s comments have set the stage so perfectly for accelerating rather than addressing the abuse of US-based social media platforms by both big-tech and the US government, that many suspected Haugen herself was an agent of one or both circles of special interests.

While Haugen may or may not be a genuine whistleblower, her handlers are undoubtedly compromised.

The confidence that Haugen alone justified all this commotion was sustained by a refreshing aura of personal agency and responsibility, which she projected with ease throughout each poignant response. But Haugen, in fact, was not alone, and never was. For most of the year, she’s been counseled and protected by one of the nation’s preeminent whistleblower organizations, the aptly named Whistleblower Aid.

Whistleblower Aid is representing Frances Haugen, whose disclosures to the SEC have formed the basis for recent reporting and Congressional investigations.

John Tye, Whistleblower Aid’s founder, is a former employee of the US State Department who claims to have sat in on National Security Agency (NSA) related briefings. He also boasts of having top secret/sensitive compartmented (TS/SCI) information clearances.

Mark Zaid is a lawyer who also is claimed by Whistleblower Aid to currently have TS/SCI clearances.

These clearances would not be possessed by a genuine whistleblower organization exposing real abuses inside the US government, but instead an organization posing as such to mitigate the damage real whistleblowers might cause if their information was brought to the press and released to the public before being sanitized, censored, and spun in a politically expedient manner.

Whistleblower Aid also includes Andrew Bakaj who served as an intelligence officer and criminal investigator for the US Department of Defense and the Central Intelligence Agency.

In essence Frances Haugen blew the whistle to a “whistleblower organization” representing the interests that need to be exposed most of all. It would akin to witnessing the local mafia carry out a murder, then reporting the murder to the local mafia. It would only make it that much easier for the perpetrators to cover up the crime and mitigate the damage knowledge of the crime might cause.

Whether Haugen is a real whistleblower or not is, at this point, immaterial. Whatever damaging information she might have had will surely be managed in such a way as to benefit the US government and its partners in Silicon Valley and their continued collective abuses, not inhibit them.

Lip service will be paid to Facebook’s impact on society while the social media corporation entwines further with the US government in their collective efforts to monopolize and control the flow of information both at home and abroad.

For nations abroad, this is another wake up call in regards to Internet sovereignty. If a nation does not allow foreign interests to control physical telecommunication infrastructure, social media platforms should also be protected and controlled domestically.

For nations lacking the ability to protect their information space with domestically derived solutions, acquiring the means to do so from nations with this capability in a similar process used by nations to acquire military defense systems could be explored.

Nations who downplay the current threat Facebook and other US-based social media platforms pose to their respective information spaces by dominating the flow of information within their borders open themselves up to the same sort of prolonged unrest, violence, and even armed conflict that has befallen the Arab World in 2011 onward and now Myanmar in Southeast Asia.

While uncertainty surrounds precisely how these hearings and investigations will manifest themselves in newfound cooperation and focus between Facebook and the US government, the final result will almost certainly be a Facebook more capable and willing to interfere in the internal political affairs of any nation negligent enough to continue allowing it to operate in their information space. There is time to begin securing national information space and achieving Internet sovereignty – but that time is finite.