HOME / SOCIAL/CULTURAL / We Are Ruled By Apes With PR Firms: Notes From The Edge Of The Narrative Matrix 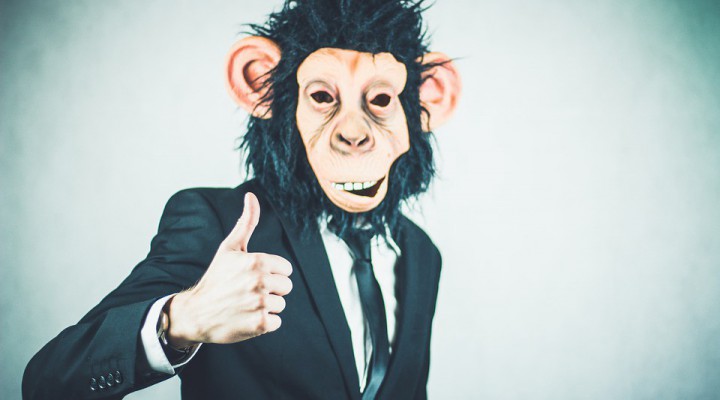 So yeah basically we’re watching sociopathic oligarchs shore up more and more control over the global population and our electoral systems are rigged to prevent us from doing anything about it and our information systems are stacked to prevent mass-scale direct action against it.

You can’t vote your way out of a problem you never voted your way into in the first place. You can’t have a revolution while everyone is being successfully propagandized into accepting things as they are. Any solution is therefore going to have to come from somewhere they haven’t secured.

So we’re all just kind of watching this happen and hoping for what amounts to a miracle, or really a stack of miracles. What gives me hope is that I know humans have a lot of surprises within themselves that they haven’t even begun to explore yet. We might just get some miracles.

The behavior of global oligarchic power structures makes a lot more sense when you see that it’s not as much a lucid elite conspiracy as it is a few barely-conscious humans compulsively acting out psychological dynamics within themselves that they don’t really understand. Elite conspiracies happen to be sure, but what’s ultimately driving them is not a complete and coherent vision for the future which takes all things into account but rather the simple egoic impulses of barely-evolved primates blindly trying to shore up control like chimps asserting dominance.

The sociopaths who rule our world are no more conscious of their own inner processes than your average serial killer. They can act out their impulses in a way that looks very organized and efficient, but the driving forces beneath it are the least-evolved aspects of humanity. We are ruled by apes with PR firms.

That’s why they often behave in ways that are nonsensical. Some ask why they’d continue killing the biosphere and flirt with nuclear war when it can kill them, for example. And the answer is not that nuclear brinkmanship is a phony performance or that climate destruction is a hoax, but that you’re dealing with the same dumb stimulus-response impulses as any other basic organism.

It is true that the drivers of the US-centralized empire want to live as gods, able to cause famines or rain fire in any part of the world which disobeys them. It is not a coincidence that the few remaining parts of the world where they cannot do this are the parts you’re most forcefully trained to hate.

But these are not gods enacting grand visions from on high; they are organisms acting out the same forces that have been unfolding since the Big Bang just like the rest of us. And they are less conscious of the way those forces are playing out within themselves than your average healthy human, not more.

No normal people want digital identity laws passed. Rank-and-file members of the public aren’t sitting around going “Man it sure sucks we can’t prove our identity online with a digital ID that contains all our information.” Only the powerful want this, and for good reason.

If voicing very basic human rights concerns about mandates and digital IDs will get you called an “anti-vaxxer” (and it will), is there any reason to treat that label like it’s a real thing with any actual meaning?

First hackers, then Havana Syndrome microwave beams. It sure is crazy how Russia keeps attacking the US in invisible ways that only US intelligence agencies can see.

I’m old enough to remember when advancing US military objectives needed to be justified by actual, physical events, like planes crashing into buildings. Now it’s justified by invisible, unverifiable allegations for which the evidence is classified.

To be absolutely clear, the US government has appointed itself the authority to unilaterally decide which of the world’s populations get to eat and which do not, and to imprison anyone who tries to facilitate unauthorized eating in a US-sanctioned nation.

“Tax the rich” is a great banner for Democrats because it’s completely meaningless. “Tax them” how much? Enough to level the playing field or a tiny percentage that won’t make any real difference? It’s perfect for Dems because it sounds revolutionary but is just more of the same.

“Tax the rich” in practice just means “Tax the rich a tiny amount more which will make no difference and will be rolled back the instant Republicans are in control.” In practice slow, incremental change always means no change at all.

Inequality makes you less safe, not more. No matter how much money you obtain, the greater the disparity between you and others the more unsafe you are, and the more you have to rely on outer structures of protection which need constant maintenance.

This is why I’m always talking about how dumb the wealthy people who rule our world are. Their reptile-brained thinking isn’t good enough to even serve their own interests, let alone the world’s.

The purpose of establishment propaganda is to deceive the ruled into believing that their interests are one and the same as the interests of their rulers.

I see the fact that we are hammered with propaganda so aggressively 24/7 as cause for hope, not despair. The fact that they have to work so hard to keep humanity this crazy means the gravitational pull is toward sanity, and they’re fighting harder and harder against that pull. It takes a lot of education to keep us this stupid.

Those who want truth and health want things transparent, honest, and awake. Those who want untruth and dysfunction want government secrecy, propaganda distortion, and a deeply unconscious public. The latter are the ones in power right now. The former are trying to oust them.

Every positive change in human behavior, whether individual or collective, has always been preceded by an increase in awareness, by becoming aware of something that was previously hidden. Those who want positive change want to increase awareness. Those who don’t want it all dark.

No matter how conscious you are, coming all the way out of hiding is still a lifelong journey. You’ll still find parts of yourself that have been hiding from the light of consciousness you never would have guessed were there many years down the road. We’re all waking up together.

Our collective awakening will look like that too. Things are going to keep becoming more and more visible, and just like individual awakening it will be awkward as fuck sometimes. And just when we think we’re done, whole new levels of previously endarkened inner territory will emerge. But the basic trajectory, whether individually or collectively, is the same: things becoming more and more visible, with a corresponding increase in harmony. The secrecy of the powerful giving way to transparency, distortions giving way to clarity, lies giving way to truth.

How are we still being deceived? How are we still deceiving ourselves? It’s the same question and its resolution happens in the same movement; it’s just that one is directed outward and the other inward. They’re both equally important for our collective movement into the light.

Dysfunction and clear seeing cannot coexist, collectively or individually. If dysfunction is occurring, it’s because something remains unseen. Our purpose here is to try and see it all; to let the human adventure behold itself from all different angles.

And move toward harmony.

One thought on “We Are Ruled By Apes With PR Firms: Notes From The Edge Of The Narrative Matrix”