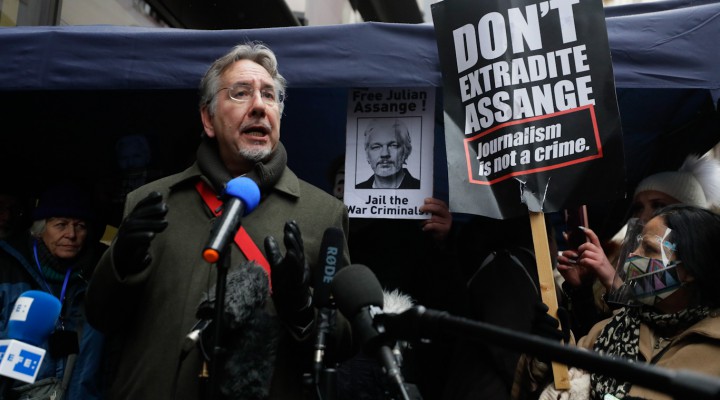 Julian Assange will not be extradited to the United States as many feared, but his fate still hangs in the balance as it was the integrity of his mental health, not the right to a free press, that saved him.

MPN- Wikileaks cofounder Julian Assange will not be extradited to the United States, a London court decided this morning. District Judge Vanessa Baraitser ruled that Assange would stay in the United Kingdom over fears for his psychological health. “I find that the mental condition of Mr Assange is such that it would be oppressive to extradite him to the United States of America,” she said, noting that she did not believe the U.S. prison system had the capability to stop him killing himself. The Australian publisher had been facing up to 175 years in a supermax prison if taken to the U.S. The prosecution, representing the U.S. government, immediately announced that it would appeal the decision.

Many of Assange’s allies hailed the decision as a decisive victory for freedom of speech. Greek-Australian economist and former Greek Minister of Finance Yanis Varoufakis expressed his delight. “A ray of hope seems to have pierced a long, dark shadow over human decency and press freedom,” he tweeted.

Yet many others appeared deeply concerned with the verdict.” This wasn’t a victory for press freedom,” said Glenn Greenwald, a journalist known for publishing leaked documents. “Quite the contrary: the judge made clear she believed there are grounds to prosecute Assange in connection with the 2010 publication.” Other reporters that have covered the case closely agreed. “Brilliant news, but be in no doubt. This ruling is utterly chilling for investigative journalism,” wrote Matt Kennard. “Baraitser sided with U.S. prosecutors on pretty much all of their arguments. It was the barbaric nature of the U.S. penal system that saved Assange.” Meanwhile, John McEvoy suggested that it was only “the integrity of a human’s mental health, and not the right to a free press, was protected today.”

Judge Baraitser made her decision only after dismissing each and every argument made by Assange’s defense team, led by Edward Fitzgerald QC. Sending him to the United States would not breach any laws against extradition for political offenses, she ruled, claiming that she had no doubts that “the usual constitutional and procedural protections” would be in place for him if he were to go there. “This court trusts that a US court will properly consider Mr Assange’s right to free speech” she added. The full decision can be read here. Thus, it was purely on the grounds of Mr. Assange’s potential to commit suicide that she ruled in his favor. Australian journalist John Pilger described the decision as a “face-saving cover” for their “disgraceful” treatment of the 49-year-old.

Baraitser: Extradition would be oppressive by reason of Assange’s mental health

Others warned that the ruling sent a message to others in the political or media sphere not to challenge the United States. “The full fury and power of empire has been brought down on Julian Assange to demonstrate to the world what happens when you dare to expose the crimes of that empire and its allies. It is terrorism by example so we all think twice,” wrote Rania Khalek of The Grayzone. Assange supporters celebrate after a ruling that he cannot be extradited to the US, outside the Old Bailey in London, Jan. 4, 2021. Frank Augstein | AP

Journalists covering the trial have faced constant hostility and intimidation from authorities at every turn. This morning, Reporters Without Borders’ Director of International Campaigns Rebecca Vincent said she had been harassed or questioned by at least 10 different police officers while trying to attend the hearing.

In the end, it was the internal rot of empire that kept it's number one foreign target out of its grasp. There's a lot to be learned from this

Conditions in American prisons are notorious. Despite having only four percent of the world’s population, the United States accounts for nearly a quarter of the prisoners on the planet. With a sprawling network of over 7,000 detention centers, the U.S. has by far the highest incarceration rate in the world, locking its citizens up at over ten times the rate of European countries like Denmark or Sweden, and over seventeen times that of Japan. Solitary confinement is also commonplace, despite the practice being widely condemned as akin to torture. Authorities were unable to prevent whistleblower Chelsea Manning, who leaked many of the most explosive files to Assange in the first place, from attempting to take her own life while she was incarcerated and in solitary confinement. Baraitser referenced Manning’s case in her decision. “That means the further brutality committed against WikiLeaks’ source played a key part in the U.S. losing their case,” reacted investigative journalist Kevin Gosztola.

Chief among those files was the “Collateral Murder” murder video, images from an American attack helicopter attack on central Baghdad from July 2007. The video shows American personnel massacring at least a dozen Iraqi civilians, including two Reuters journalists, in cold blood. Going viral on social media, the images showed the occupation in a completely different light to that of the carefully curated, sanitized one Americans had seen on corporate media. Since then, those who brought it to public attention have been persecuted.

Mexican President Andres Manuel Lopez Obrador today announced that his country would offer political asylum to the Australian, citing its long history of protecting whistleblowers and those suffering political persecution. However, Assange will certainly not be going there immediately. Despite ruling against the United States in the hearing, Baraitser sent him back to Belmarsh Prison. On Wednesday the court will decide if he is granted bail. “I had hoped that today would be the day that Julian would come home. Today is not that day. But that day will come soon,” Assange’s partner, Stella Morris, told reporters outside Westminster Magistrates’ Court this morning. “We cannot celebrate today…We will celebrate the day he comes home.”

Feature photo | John Rees from the ‘Free Julian Assange’ campaign speaking outside the Old Bailey after a ruling that Assange cannot be extradited to the United States, in London, Jan. 4, 2021. Kirsty Wigglesworth | AP