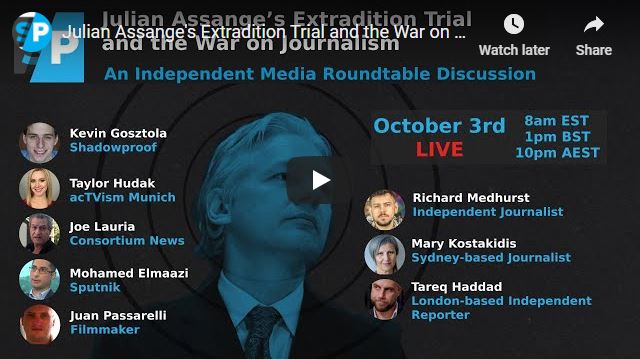 WikiLeaks founder Julian Assange’s legal team called their last witness in the extradition trial, which has unfolded over the past four weeks at the Old Bailey Courthouse in London. The defense and prosecution will file closing submissions to the magistrate court, and a decision on extradition is expected in January 4, 2021.

Throughout the extradition trial, independent media have led the way in defying a blackout by corporate media institutions around the world. They have worked to focus on the substance of testimony from witnesses instead of trivial moments that establishment reporters have turned into sensational clickbait headlines that distract from what is at stake for global press freedom.

On October 3, journalists from independent or alternative media, who were credentialed by the court, came together to highlight crucial developments during the extradition trial. They outlined some of the most effective testimony and also discussed some of the obstacles, which Assange’s legal team faced in convincing a judge to reject the United States government’s extradition request.