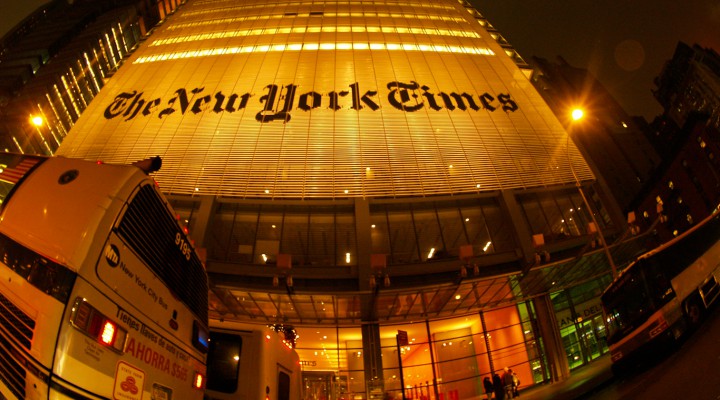 In his column entitled “The Secrets of Jewish Genius,” Bret Stephens pondered the question why Jews had achieved so much despite constituting such a small part of the world’s population. For him, the answer lay in their genetic superiority.

MPN-The paper of record is under fire again for publishing an unusual article promoting race science. In his column entitled “The Secrets of Jewish Genius,” Bret Stephens pondered the question: why have Jews achieved so much despite constituting such a small part of the world’s population?

For Stephens, the answer lay in their genetic superiority: “Jews are, or tend to be smart. When it comes to Ashkenazi Jews, it’s true,” he wrote, making sure to distinguish between white Ashkenazi Jews and other, darker-skinned groups such as Sephardic or Mizrahi Jews. Noting that Ashkenazis have won 27 percent of American Nobel prizes in science and account for more than half of world chess champions, he quoted one paper that claimed, “Ashkenazi Jews have the highest average I.Q. of any ethnic group for which there are reliable data.”

However, one of the paper’s authors, Henry Harpending, was a discredited race scientist with a history of promoting eugenics– and someone who had ties to white nationalist groups according to the Southern Poverty Law Center.

The pushback to a Jewish person arguing that certain races are inherently superior to others was swift. Referencing the 7,800 layoffs across the media in 2019, The Nation’s Ben Ehrenreich quipped:

It’s hard to think of a harsher indictment of US media than the fact that literally tens of thousands of journalists have been laid off in recent years and Bret Stephens still has a job.

Even Fox News panned the column as racist, while Stephens’ New York Times colleagues hit back. Jody Rosen wrote, “Speaking as both an Ashkenazi Jew and a NYT contributor, I don’t think eugenicists should be op-ed columnists.”

Facing the backlash, the Times’ editors, who had previously tacitly endorsed the story by publishing it, added a lengthy note at the beginning of the article claiming that it was a “mistake” that Stephens cited the debunked, racist study. “The effect was to leave an impression with many readers that Mr. Stephens was arguing that Jews are genetically superior. That was not his intent,” it claimed.

The NYT has added a lengthy "editors note" to the top of Bret Stephens column.

It includes this claim: "Mr. Stephens was not endorsing the study or its authors’ views, but it was a mistake to cite it uncritically"

That is a lie.

The New York Times has a record of normalizing, if not subtly promoting, far-right racist ideology. It has published long and sympathetic portraits of American Nazis and given glowing endorsements to reactionary groups like the “Intellectual Dark Web,” glamorizing their boilerplate conservatism as a subversive anti-establishment movement. Despite claiming to be a liberal newspaper, the Times employs a stable of strongly conservative columnists, including Stephens, Bari Weiss, Ross Douthat and David Brooks. In contrast, there is a distinct lack of Sanders-supporting social democrats, let alone anything further to the left.

In the wake of the most recent Stephens controversy, many authors came forward with stories of Times’ editors suppressing stories that showed the political right in a negative light. For example, author Cari Luna was asked to write a story about white nationalism in Portland. While her editors loved the piece, it was killed by management, because, in her own words “it was too far left for their comfort.” Others also shared similar stories.

Fun fact: a while ago a NY Times opinion editor solicited a piece about white nationalism in Portland from me and loved it, but the higher-ups nixed it, my guess is because it was too far left for their comfort. But those same folks are cool with this Bret Stephens eugenics piece

In April 2017, the Times hired Stephens to fill one of its most prestigious posts as a regular columnist. By this time, he already had a long and well-publicized history of promoting racism and other reactionary views in print. While working for the Wall Street Journal he wrote of “the disease of the Arab mind” where Palestinians had been “seized” by a “blood lust” wanting to massacre Israelis. He had previously accused them of a “communal psychosis” that challenged the “comforting fiction” that all people were basically good and claimed they were, as a people, incapable of empathy.

His controversial views are not limited to the Middle East, however. In an interview with Vox’s Jeff Stein, he claimed that “Black Lives Matter has some really thuggish elements in it” and that the dramatic increase in police killings of black people is “connected with a culture of resistance to police.” Stephens is also a fervent climate change denier and an advocate of torture.

Earlier this year he went viral due to a very public online meltdown. After David Karpf, a George Washington University professor made a silly (and barely seen) joke on Twitter about news of a bedbug infestation at the New York Times’ offices being caused by him, Stephens reacted with outrage, sending an email in complaint to the professor’s superiors in a clear attempt to use his influence to have him dismissed. After this project failed, Stephens claimed in his column that the idea of “infestation” was an anti-Semitic trope comparing himself, as a Jew, to insects. He was unable to provide any adequate evidence of this. It was also widely publicized that he had called Palestinians mosquitos in a previous column. Stephens deleted his Twitter account during his meltdown, as public opinion sided with Karpf.

That Stephens could be so acutely conscious of non-existent racist tropes like bedbugs and yet not understand exactly what he was arguing for in his latest article, as the New York Times insists, stretches belief. Stephens is a canny actor and knows exactly what he is doing and what his role at the Times is. A study from YouGov found around a quarter of Americans, including 41 percent of Trump voters believe that the government is conspiring to make the U.S. a Muslim majority country– a key component of the white genocide theory of the far-right. It is exactly that constituency that has carried out genuine and shocking anti-Semitic attacks on Jews in America, including the recent synagogue shootings in San Diego and Pittsburgh. Even as he backs the state of Israel, President Trump continues to casually defame or insult American Jews by questioning their loyalty or presenting them as greedy.

As racist attitudes in the U.S. again begin to gain currency, there are those in the media that promote them back into respectable conversation.