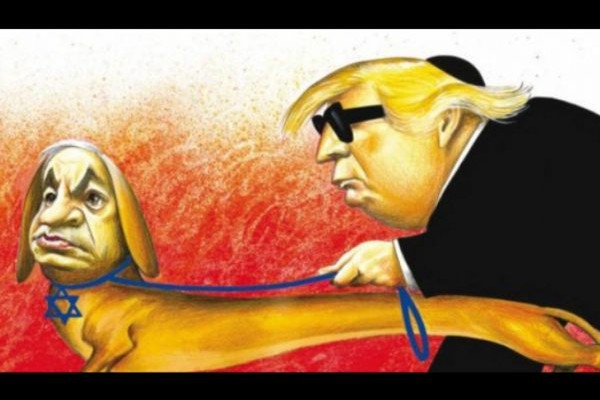 Israel and its friends in Washington and New York never miss the opportunity to exploit the news cycle to tighten the screws a bit more, rendering any criticism of the Jewish state unacceptable or even illegal. Israel’s Ambassador to the United Nations Danny Danon has been persistently demanding that what he describes as anti-Semitic speech be criminalized. Danon declared that “The time for talking and having a conversation is over. What Israel and the Jewish community around the world demand is action – and now.”

How exactly Danon would enforce his definition of acceptable speech is not clear, but the demands to eliminate any negative commentary regarding the holocaust or on Israel and/or the behavior of diaspora Jews have been promoted for some time, resulting in laws in Europe that inflict harsh punish on those who dare to speak out. The latest incident in the campaign to eliminate the First Amendment in America took place oddly enough on the pages of the New York Times, which, in its international edition, ran a cartoon by a Portuguese cartoonist showing a dog with the face of Prime Minister Benjamin Netanyahu on a leash leading a caricature of Donald Trump wearing a yarmulke and a blind man’s glasses. The Netanyahu-dog had a tag on its collar featuring a Star of David.

There are several ways to interpret the cartoon. It is, of course, an insult to dogs to have them depicted in such a fashion as to suggest that they might behave like the monstrous Israeli Prime Minister. No dog would sink so low. One observer, commenting from a dog’s point of view, noted that “We canines share that saying that ‘the eyes are the window to the soul.’ Look into our eyes and you’ll see love and trust. Look into Netanyahu’s eyes you see cunning and deceit so why stick his head on our body?”

On the other hand, one might see in the cartoon a serious message, that Netanyahu has been able to “wag the dog” with an ignorant and impulsive United States president who is so desirous of pandering to Jews both in Israel and in the U.S. that he is blind to his obligation to do what is best for the American people. Trump, who is the first president within memory not to own a dog, would rather stroke the head of the disgusting casino billionaire Sheldon Adelson than an intelligent and loyal Labrador retriever.

The cartoon was immediately blasted as being anti-Semitic, of course, because the definition of that “hate crime” has now been expanded to include criticism of anything that is even remotely Jewish. The Times twice went into full apology mode, promising never to do anything like that again and implying that heads would roll. The paper’s spokesperson stated that the publishers were “deeply sorry” and elaborated that “The image was offensive, and it was an error of judgment to publish it. Such imagery is always dangerous, and at a time when anti-Semitism is on the rise worldwide, it’s all the more unacceptable. We are committed to making sure nothing like this happens again.”

But in spite of the abasement, the critics kept piling odd, some even claiming thatthe newspaper has a history of anti-Semitism. It was an odd assertion as the NYT has been Jewish owned since 1896, is home to numerous Jewish journalists, and its news coverage on the Middle East often serves as a mouthpiece for the Israeli Foreign Ministry.

All-Jewish all-the-time Times columnist Bret Stephens was in particularly fine form, attacking his own employer, writing in an op-ed entitled “A Despicable Cartoon in the Times” that appeared within hours of the cartoon’s surfacing. He demanded that the Times should engage in “some serious reflection as to how it came to publish that cartoon,” which he described as “an astonishing act of ignorance of anti-Semitism.” He elaborated how the cartoon shows “The small but wily Jew leading the dumb and trusting American. The hated Trump being Judaized with a skullcap. The nominal servant acting as the true master. The cartoon checked so many anti-Semitic boxes that the only thing missing was a dollar sign.” It might also be noted that the Times published on Sunday a photo that might be considered highly offensive to Catholics without any commentary by Stephens or from the paper’s editorial apologist.

Well, for once Stephens gets something right. The cartoon encapsulates the reality of U.S. policy in the Middle East and the relationship between Trump, who has made concession after concession to Israel, and his apparent masters. And yes, a few million Benjamins scattered around would have underlined why Trump misbehaves as he does.

And, in a demonstration that no crisis is too small to be exploited by the Trump Administration, Vice President Mike Pence tweeted, “We stand with Israel and we condemn antisemitism in ALL its forms.” Donald Trump himself followed up with his own tweet on the following day, writing that “The New York Times has apologized for the terrible Anti-Semitic Cartoon, but they haven’t apologized to me for this or all of the Fake and Corrupt news they print on a daily basis. They have reached the lowest level of ‘journalism.’”

The furor over a cartoon was useful as it covered up the latest outrage conducted by Israel against the Palestinians. The Israelis are again attacking Gaza, a story which the New York Times briefly reported in their Saturday edition. The Times headline in the online edition was “Gaza Militants Fire 250 Rockets, and Israel Responds With Airstrikes” before reporting that “Palestinian militants launched about 250 rockets and mortars into southern Israel from Gaza on Saturday, and the Israeli military responded with airstrikes and tank fire against targets across the Palestinian territory… Four Palestinians — including one militant, another man, a pregnant woman and her young daughter — were killed in Israeli strikes… That would bring the total number of Gazans fatally struck by Israeli fire since Friday to eight.”

Note how the Times reports the story. It gives the impression that the Gazans initiated a major attack by firing hundreds of missiles while Israel “responded” to Palestinian initiation of violence. Framing it in that fashion is a replay of the Israeli Foreign Ministry version of events, uncorroborated by any independent observers. Other accounts differ as to who started what and whom to blame. In reality, the Israelis have been threatening Gaza for months and have been moving troops up to the fence line for what is expected to be a final push to kill alleged “militants” in the Strip. The Times also wastes no time on humanizing the Arab casualties – the Palestinian baby that was killed was fourteen months old and named Seba Abu Arar. Her pregnant mother also died.

That the media in the United States should follow the Israeli line in reporting what takes place in the Middle East should surprise no one. It is called self-censorship and it will do until real laws can be drafted that will make speaking or writing anything unpleasant about Israel illegal. Referring back to the Times cartoon, the death of free speech is the reality that we American will eventually arrive at due to the actual power relationship that lies behind the metaphor of the wily Israeli dog leading the big, dumb American blind man.