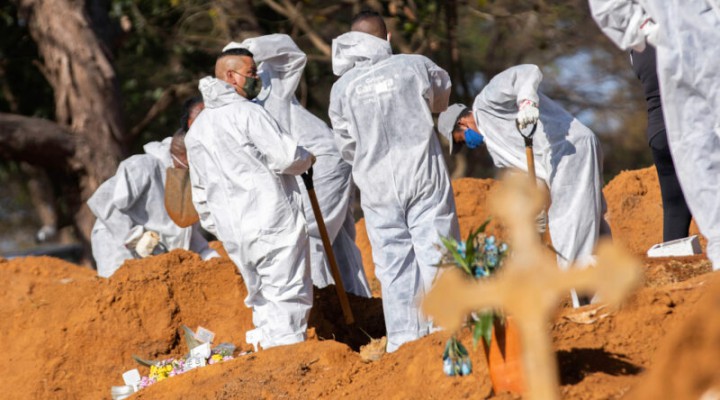 Much of Latin America is in meltdown with coronavirus cases soaring, bodies piling up, and anger mounting as a new wave of neoliberal leaders who openly reject individualism amid collective public health crisis pour fuel on the fire.

MPN– While other continents have largely dealt with the COVID-19 pandemic, much of Latin America is in meltdown, as cases soar, bodies pile up, and anger mounts. Its new wave of neoliberal leaders, mistrustful of collective action in any situation and extolling the virtues of individualism in a collective public health crisis, are making the problem far worse.

Despite having months to prepare for the worst, over 100,000 people have (officially) died in South America already, over two-thirds of them in Brazil. The country’s far-right president Jair Bolsonaro, who came to power in a highly dubious election in 2018 marked by the imprisonment of the runaway favorite Lula da Silva of the left-wing Workers’ Party, has constantly downplayed the threat, describing it as merely a “little flu” and decrying the decision by the governor of Sao Paulo to initiate a lockdown, calling it a “hysterical” overreaction. Even amidst a deadly wave of disease, he continued to hold public rallies, declaring that the coronavirus was nothing to worry about. In a remarkable turn of events, Rio de Janeiro’s criminal gangs showed themselves to be more responsible and committed to public safety than the government, imposing their own curfew to stop the spread of COVID-19. “We want the best for the population. If the government won’t do the right thing, organized crime will,” read their statement. “We are at the mercy of a deranged lunatic,” concluded independent outlet Brasil Wire.

Now, Bolsonaro himself has tested positive for COVID-19. But he still refuses to wear a mask all the time, saying they are only for “fairies” or “faggots,” depending on the translation. The Brazilian Press Association is suing him for deliberately endangering them by not self-isolating but telling them face-to-face, without a mask, about his positive test.

Bolsonaro took off his mask while announcing in a press conference that he tested positive for #COVID19 https://t.co/j7QSBMZ5sS

Ecuador has given up even pretending to record infections. On April 24, it announced 7,595 had tested positive; the two days after that, zero cases. Its president, Lenín Moreno, was elected on a promise to further Rafael Correa’s social-democratic agenda. Instead, on orders from Washington and the IMF, he slashed the country’s health budget by 36 percent, rescinded the country’s support for whistleblower Julian Assange and began persecuting Correa, who was forced to flee to Belgium. Like in Brazil and Bolivia, the Ecuadorian government quickly purged the country of its contingent of Cuban doctors, some of the only medical professionals serving Latin America’s popular classes. The coastal city of Guayaquil is thought to be the worst-affected in the world by COVID-19.

Hardline Christian conservative Jeanine Añez came to power in Bolivia in November in a military coup that ousted Evo Morales and his Movement Towards Socialism Party. She wasted no time in mass privatization of the country’s state-owned resources, leading hospitals across the countries to close. Añez herself has now tested positive for the virus, and six of the country’s seven worst days for total infections have happened in the past week.

Cuban doctors in Bolivia provided free healthcare until they were pushed out by the US-backed coup. The hospitals they worked at are still closed, leaving working class communities vulnerable. Report from @OVargas52 pic.twitter.com/s3m0K8E3v7

In Chile, billionaire president Sebastian Piñera has seen his personal wealth increase substantially during the lockdown. This week the pro-business leader vetoed a bill with bipartisan support that protected important public services during the pandemic, ensuring they remained open to all. Critics say the move is hardly likely to improve the situation across the country and puts profits before people.

Meanwhile, in Colombia, neoconservative president Ivan Duque is opening up the economy, even as the pandemic reaches new heights. Thursday saw a new record number of infections in the country, 5,335, beating Tuesday’s previous high of 4,213. Duque, who came to power in a highly questionable election that, had it occurred in an enemy state, would have likely been labeled a sham. His leftist challenger, Gustavo Petro, narrowly escaped an assassination attempt from government-aligned paramilitaries, while American election observers, mistaken for ordinary citizens, report being offered money to vote for Duque. The president is now using the pandemic to end the country’s long peace process while government-linked paramilitaries are taking the opportunity of the lockdown to assassinate their foes, including union leaders and activists. The economic and social confusion has led to large numbers of people crossing over the long and porous border to Venezuela, contributing to an increase in cases there as well.

One of the few bright spots in the region is Cuba, the island having squashed its curve. The worst days in the past month have seen only 15 new cases and one death. Its strong public services, particularly its famous health system, have aided the fight against the virus. In March, MintPress spoke to an American student doctor training in Havana, who said she was optimistic about the country’s preparedness in dealing with COVID-19. “I am very confident of Cuba’s public health and epidemiology system, it is all very organized: nationally, provincially, regionally and locally,” she said.

While these governments might have got what they want by deposing the wave of progressive, anti-imperialist governments in the last decade, their ideological drive to privatize and destroy any public institution is reaping what it sowed during this pandemic. Unfortunately, it is the people of Latin America who are suffering the most because of it.