HOME / Politics / So It’s OK to Erase Soviet Statues, but Not Western Imperialist Ones? 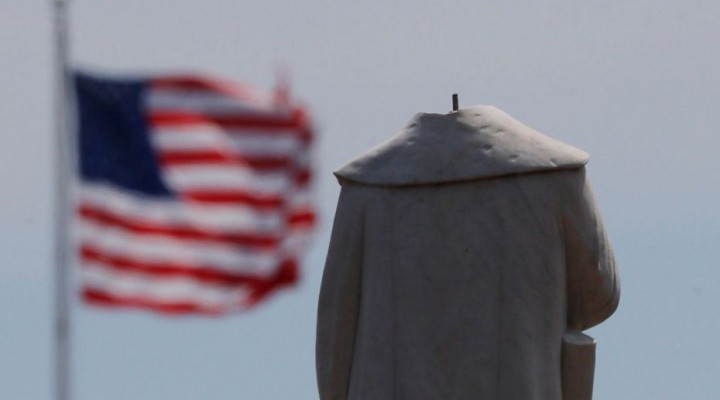 Taking down Soviet figures is an act of cultural vandalism that is serving a wider geopolitical agenda of hostility towards Russia.

Statues commemorating colonizers, slavers and imperialists are toppling from their pedestals on both sides of the Atlantic in the wake of mass protests over the U.S. police killing of African-American man George Floyd. The surge in anti-racist public anger has widened to target other icons seen as glorifying racism and oppression of other peoples.

In recent days, the U.S. has seen statues dedicated to Christopher Columbus and Confederate leaders taken down or defaced.

In Britain a statue of a slave-trade figure was dumped into a harbor and local elected councils up and down the country are reviewing the fate of hundreds of other such landmark effigies.

The same angry public mood in Belgium, Norway and other European countries is calling for a reckoning with heritage sites that are seen as paying homage to colonialism and slavery. Several statues dedicated to Belgian King Leopold II have been vandalized owing to his legacy of genocide in the African Congo at the end of the 19th century.

The drive to remove these statues has been going on for decades. In 2000, antiwar protests in London targeted the figure of Winston Churchill in Parliament Square. It was defaced again last week with the slogan “racist” was daubed under the sculpture of the World War Two leader. The latest epithet refers to Churchill’s infamous racialist bigotry towards Asians and Jews, as well as his gung-ho imperialist predilections.

In August 2017, in Charlottesville, Virginia, American woman Heather Heyer was killed by a white supremacist driving a speeding car into a peaceful crowd who were demanding the removal of a statue to Robert E Lee, the Confederate general. Other Southern figures from the Civil War (1861-45) have also been slated for taking down owing to claims that they represent pro-slavery racism.

This movement has been renewed and expanded internationally since the brutal murder of George Floyd by a white cop in Minneapolis on May 25. The police officer knelt on Floyd’s neck for over eight minutes as he pleaded for breath. The whole gruesome scene was recorded on the video of a bystander’s phone. Since then protests on both sides of the Atlantic have been calling for an end to racist policing and institutionalized inequality. But there seems to be a watershed moment that has galvanized past protests against numerous racist killings, primarily in the U.S. but also in European countries. The mass demonstrations also seem to have aggregated into calls for addressing wider social and multiracial grievances about economic injustice, poverty, war and the imperialist legacy of Western countries.

A backlash against removing controversial statues and other emblems uses the argument that the action is obliterating history.

British Prime Minister Boris Johnson has condemned the removal of existing controversial statues. He said: “We cannot now try to edit or censor our past. We cannot pretend to have a different history. The statues in our cities and towns were put up by previous generations. They had different perspectives, different understandings of right and wrong. But those statues teach us about our past, with all its faults. To tear them down would be to lie about our history, and impoverish the education of generations to come.”

If a landmark to a slaver or colonizer is removed then how is the history of that epoch discussed, it is contended. However, that may sound like an oblique apology for having such figures displayed in public spaces.

Trump stated: “It has been suggested that we should rename as many as 10 of our Legendary Military Bases, such as Fort Bragg in North Carolina, Fort Hood in Texas, Fort Benning in Georgia, etc. These Monumental and very Powerful Bases have become part of a Great American Heritage, and a history of Winning, Victory, and Freedom.”

The president has previously opposed removing statues of Confederate leaders with the following rationale typical of others like Britain’s Johnson who share the view of maintaining the status quo: “Sad to see the history and culture of our great country being ripped apart with the removal of our beautiful statues and monuments…the beauty that is being taken out of our cities, towns and parks will be greatly missed and never able to be comparably replaced!” wrote Trump back in 2017.

Advocates of taking down offending statues say the objects should not be destroyed but rather put in museums where they can be viewed with explanatory historical context of colonialism, imperialism or slavery. That seems a fair compromise.

For people of African descent and others of color, the public veneration of personages and symbols of slavery or colonial conquest is understandably repugnant. Indeed for many people regardless of their skin color, such glorification is also seen as repugnant. It may be an inevitable fact that victors write history. But it is not an inevitable fact that that dubious version of history must prevail in the form of icons adorning public spaces.

British and other Western state wealth was built largely on the backs of colonized peoples around the world. Why should key figures of that genocidal legacy be allowed to stand over public places with pomp and imperial majesty? In Britain, this includes public figures dedicated to Sir Francis Drake, Sir Walter Raleigh, Cecil Rhodes, Sir James Cook and many more.

A notable double standard prevails in the debate. While defenders of such monuments are animated by supposedly preserving history “warts and all”, they have had no such problem about the ransacking of hundreds of Soviet-era statues in EU members Poland and the Baltic states of Lithuania, Latvia and Estonia.

Since those countries joined NATO and the EU, there has been a systematic erasure of public monuments dedicated to Soviet military leaders and Red Army soldiers. The silence from Washington and Western European capitals is tacit approval for such state-sponsored vandalism. Where is the outcry to “preserve history”?

There is none because the desecration of public Soviet landmarks is part of the toxic revisionist trend about World War Two and the erasure of the historic role of the Red Army in defeating European fascism.

The double standard is all the more appalling because there is no equivalence between Western figures of imperialist war and colonial crimes and the Soviet heroes who liberated Poland and Eastern Europe from the Third Reich’s tyranny.

Taking down Soviet figures is an act of cultural vandalism that is serving a wider geopolitical agenda of hostility towards Russia.

Taking down objectionable figures in Western states is an act of reparation in which these states are forced to account for genocidal histories that have for long been concealed by chauvinistic, supremacist arrogance.

A light in the Darkness

0 thoughts on “So It’s OK to Erase Soviet Statues, but Not Western Imperialist Ones?”