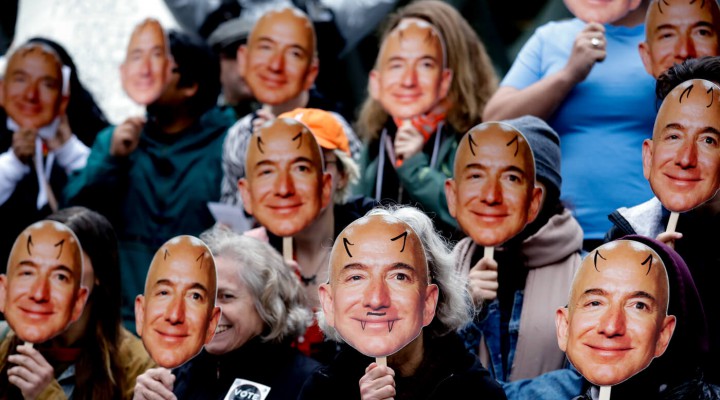 MPN- Jeff Bezos’ ties to the national security state through Amazon Web Services are formidable, but the triple-digit billionaire’s furnishing of surveillance tools to the police state are no less disturbing.

Amazon is lobbying the public with proposed guidelines for lawmakers to adopt when crafting legislation around the use of facial-recognition technology. Amazon’s own software, Rekognition, has been put to the test by rights groups such as the ACLU, who have come to troubling conclusions about racial bias and threats to civil liberties.

The online retail giant’s CEO and wealthiest man in the world, Jeff Bezos, enjoys deep ties to the CIA via a $600 million cloud-computing contract with Amazon Web Services (AWS) he struck in 2014, prior to taking over the Washington Post. AWS is also a top contender for a Defense Department cloud-computing contract to the tune of $10 billion, the winner of which is expected to be announced in March.

In the meantime, the Pentagon is currently investigating whether Amazon created a conflict of interest in the process by rehiring Deap Ubhi, an AWS employee who went on to work for the Defense Department where he “helped guide the U.S. military’s cloud computing efforts,” according to the Post. Today, Ubhi is General Manager at AWS.

In favor of a little regulation, with the emphasis on little

Bezos’ ties to the national security state through AWS are immense, but the triple digit billionaire’s furnishing of surveillance tools to the police state are no less disturbing.

On Thursday, the company released proposed guidelines for Congress to consider when regulating facial-recognition technology. As Mashable’s Rachel Kraus notes, “it is a pre-emptive strike, that allows the company to say ‘we are in favor of regulation,’ while also making sure that the regulation is not too cumbersome.”

Amazon combines its data with police to target “at-risk” areas with fake Amazon boxes with Amazon GPS technology planted inside (and Amazon doorbell cameras watching on) to entrap would-be burglarshttps://www.theverge.com/2018/12/12/18137415/amazon-package-sting-operation-jersey-city …

30 people are talking about this

But the proposals themselves, just as much as the company’s motives in issuing them, shield Amazon from scrutiny. That’s because the company’s post says nothing of its responsibility to prevent illegal use of its software. Instead, the company suggests that “facial recognition should always be used in accordance with the law, including laws that protect civil rights.”

“Amazon’s framework rings woefully hollow, underscores the company’s refusal to properly address the dangers of its technology in government hands, and reinforces the urgent need for Amazon to get out of the surveillance business altogether,” Neema Singh Guliani, senior legislative council at the ACLU, told Kraus. “Proposing a weak framework does not absolve Amazon of responsibility for its face surveillance product.”

The proposal also suggests that “When facial recognition technology is used by law enforcement for identification, or in a way that could threaten civil liberties, a 99% confidence score threshold is recommended.” However, an Amazon spokesman told Gizmodo’s Bryan Menegus that a failure by law enforcement clients to employ that threshold is not grounds for Amazon revoking access.

“Powered by artificial intelligence, Rekognition can identify, track, and analyze people in real time and recognize up to 100 people in a single image. It can quickly scan information it collects against databases featuring tens of millions of faces, according to Amazon,” the ACLU has said.

Costs “less than a large pizza” and about as accurate

Amazon also has plans to bring the tech to your doorstep.

The technology has been “aggressively marketed” to law enforcement and Immigration and Customs Enforcement (ICE), according to the ACLU. Bezos’ Washington Post even reported that the Washington County Sheriff’s Office in Oregon was licensing the technology for as little as six to 10 dollars a month, with the stipulation that the officers trumpet the deal with other potential customers including police agencies and body-camera manufacturers.

The ACLU was able to pick up Rekognition themselves for a mere $12.33, “less than a large pizza.”

Sputnik News reported that Rekognition was also being used by police in Orlando Florida through the city’s “network of surveillance cameras,” and that Motorola Solutions, a major manufacturer of police body cameras, is a Rekognition client.

Rekognition has returned false and racially biased results in a slew of independent studies. In one conducted by the ACLU, the software “incorrectly matched 28 members of Congress, identifying them as other people who have been arrested for a crime.” About 40 percent of the false positives were of people of color, whereas people of color make up only about 20 percent of Congress.

THREAD: @ACLU_NorCal tested Amazon’s facial recognition product Rekognition and it falsely matched 28 Members of Congress with mugshot photos. Here’s how we did it and what we found. https://www.aclu.org/blog/privacy-technology/surveillance-technologies/amazons-face-recognition-falsely-matched-28 … 1/ 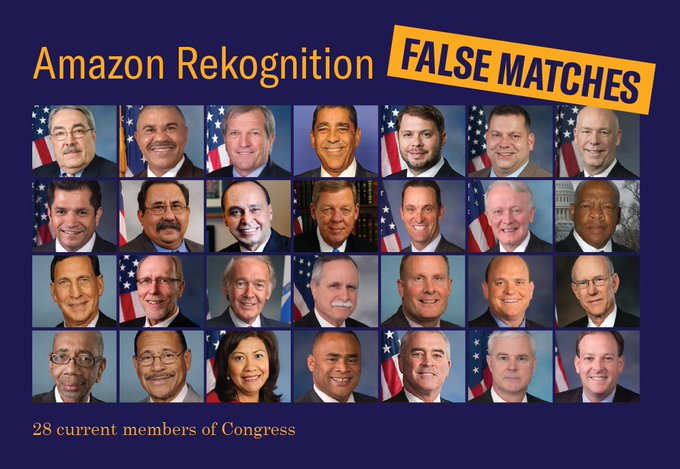 165 people are talking about this

Whereas the Sheriff’s Office in Oregon reportedly uses a database of 30,000 mugshots to power Rekognition matching abilities, the ACLU used 25,000 that are publicly available. They also “used the default match settings that Amazon sets for Rekognition.”

Amazon rebutted the ACLU’s findings, arguing that “80 percent confidence is … not appropriate for identifying individuals with a reasonable level of certainty.” Prior to releasing the guidelines, Amazon said that it recommends 95 percent or higher for law enforcement, aided by a human partner.

But in the case of the Washington County Sheriff’s Office, the Public Information Officer (PIO) claims that cops don’t even bother using a match confidence threshold.

According to Gizmodo, Amazon itself says that a lower than 99 percent threshold may be used by law enforcement “for scenarios that benefit from a larger set of potential matches” — although that has not stopped the sheriff’s office from using Rekognition in cases of theft or homicide, according to an anonymous source inside the department.

A police spokesman sang a different tune, telling Gizmodo “the sheriff’s office has never viewed Rekognition search results as ‘matches.’ The technology provides leads for investigators, but ultimately identifying suspects is a human-based decision-making process, not a computer-based one.”

OK who’s that out there protesting?

Nonetheless, even such “leads” are likely to raise the hairs of civil liberties advocates who are wary of government surveillance of First Amendment-protected activity, such as protesting.

Amazon’s guidelines on Thursday do “nothing to the reduce the inevitability of law enforcement using the technology to determine who attends protests, monitor immigrants, or target communities of color,” the ACLU’s Singh Guliani told Mashable.