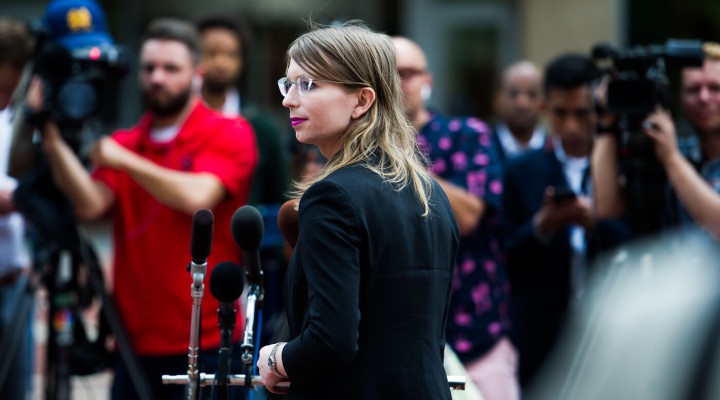 MPN– The man responsible for some of the most inhumane punishment of whistleblower Chelsea Manning stands a good chance of becoming a Democratic Congressional candidate. On July 14, Democrats in Alabama’s First District will go back to the polls to choose from one of two candidates. In the March primary, James Averhart finished less than 2,000 votes behind leader Kiani Gardner, forcing a runoff. A 30-year military veteran, Averhart began as a Marine infantryman in 1987 before transferring to the Military Police and becoming a corrections officer. Between 2010 and 2011, he was in charge of the military brig at Quantico, VA, where Manning was held on 22 counts of leaking classified information to Wikileaks.

During her time at Quantico, Manning was held in solitary confinement, a practice roundly condemned by human rights groups, the United Nations, and almost universally described as a form of torture. In her testaments and complaints, Manning singled out Averhart as a particularly sadistic torturer, claiming that he entered her cell, yelled at her, and declared that he was her “God,” implying he had total control over her life. Averhart repeatedly rejected psychiatrists’ constant recommendations that Manning should not be held in solitary in an 8-by-6 foot (2.4-by 1.8-meter) cell around the clock. According to Manning’s complaint:

On 18 January 2011, over the recommendation of Capt. Hocter and the defense forensic psychiatrist, Capt. Moore, CWO4 Averhart placed me under Suicide Risk. The Suicide Risk assignment resulted in me being required to remain in my cell for 24 hours a day. I was stripped of all clothing with the exception of my underwear. My prescription eyeglasses were taken away from me and I was forced to sit in essential blindness.”

On the matter, Amnesty International wrote to Defense Secretary Robert Gates, expressing their dismay that Manning was being locked up in a windowless box and shackled during visits, claiming that her treatment violated both domestic U.S. and United Nations laws on the minimum standards of prisoner welfare. The Marine Corps Chief of Corrections would later testify that Averhart wrongfully kept Manning on suicide watch (meaning she was disturbed every five minutes). All this was for the pretrial detention of a suspect that should have been presumed innocent until proven guilty.

Averhart had previously led a task force dedicated to finding and arresting Vietnam War veterans who refused to fight. As The Guardian wrote in 2006: “Since he took over the Marine Corps Absentee Collection Centre in 2004, Chief Warrant Officer James Averhart has reopened cold cases and claims to have tracked down 33 deserters.” One 65-year-old Floridian was held in jail for five months for a desertion that occurred 40 years earlier. This zealous persecution, according to writer Andrew Perez, who first covered the Averhart story, was an attempt to discourage any modern-day deserters from the Iraq War.

Despite his history, the former soldier presents himself as a civil libertarian, his campaign website putting civil rights and criminal justice at the forefront of his message: “Averhart believes that all people have a right to participate in our government and our society without fear, oppression, or discrimination,” it reads, promising to “preserve and expand protections for all Americans” and “fight for end-to-end criminal justice reform.”

The most consequential of Manning’s leaks was the infamous “Collateral Murder” video, which showed U.S. military personnel carrying out a massacre of civilians (including two Reuters journalists), in cold blood, laughing at the carnage they were creating. Neither the military units who carried out the atrocity nor their superiors faced any consequences, unlike Manning, who was prosecuted for sharing the tape and labeled an “ungrateful traitor” by Donald Trump. She was sentenced to 35 years in prison, although that was later commuted by President Obama. In 2018, she unsuccessfully ran for the Senate, challenging the incumbent Ben Cardin. Since then, she has faced constant harassment and was jailed again for refusing to testify against Wikileaks founder Julian Assange.

The runoff election on July 14 is sure to be a hard fought race, given the close outcome in March. Averhart’s opponent is Kiani Gardner, a former research scientist and biology professor from Hawaii, who has been endorsed by influential Massachusetts Senator Elizabeth Warren.