HOME / WORLD / Bolivia: First Election Since US-Backed Coup Pits Right against Left, Rich Against Poor and White against Everyone Else 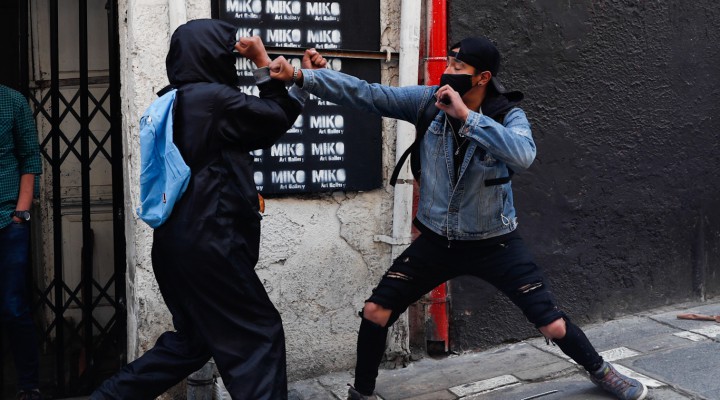 MPN– Eleven months after a U.S-backed military coup overthrew the democratically elected Evo Morales and his Movement to Socialism (MAS) party, Bolivians will go to the polls on Sunday, offering them a chance to repudiate the coup government of Jeanine Añez, who has ruled the country since last November.

The last year has been a period of constant political struggle, as the self-described “interim government” has fought to impose its rule on a rebellious population, attempting to bring sweeping changes to the Andean state. Yet despite the arrest, exile, and repression of his colleagues, polls show MAS candidate Luis Arce as the clear frontrunner among many, with some suggesting he could win the election outright in the first round of voting.

Although the conflict is a political one, it is impossible to deny the clear and overt racial dynamic at play. While the country’s right-wing parties draw their support from rich, upper-class white Bolivians, many of whom live in eastern areas, the MAS is inordinately backed by the country’s indigenous or mixed lower-class majority.

MintPress has been speaking with a number of major MAS actors in this weekend’s election. Most of them see the event as an opportunity to reassert racial equality and reject an older model of white domination that ruled the country since the Spanish Conquest until Morales’ election in 2006.

“On October 18th we have to bury the fascist right…look at who the candidates for the right are, they’re people descendants from the Spanish, from Croatians, from all those empires. They don’t believe in our sovereignty or our culture,” said Juan Vilca of the Unified Syndical Confederation of Rural Workers of Bolivia.

What we’re excited about is that we have a winning formula, Luis Arce for president, he represents economic stability and can reach the middle class, and for vice president, we have an indigenous campesino, our brother David Choquehuanca, he’ll make sure that our culture and identity are respected, he’ll make sure our poncho, our chicote [whip], our chuspa [traditional bag], our sombrero, our dress, is respected.” Morales, who escaped persecution in November by fleeing to Mexico, and later Argentina, was the country’s first indigenous leader since the Spanish conquest. Coming from the Aymara nation, he was a poor peasant farmer before becoming politically active in trade unions. Morales, with his strong indigenous features, made racial equality a central focus of his administration. The 2009 constitution officially changed the country’s name to the “Plurinational State of Bolivia” to recognize its multi-ethnic nature, with the indigenous Wiphala flag granted equal status to the more traditional tricolor design seen internationally. This did not please Bolivia’s wealthy, mostly white, westernized elite.

Addressing a crowd, Eva Copa, president of the Bolivian senate and herself an Aymara from the city of El Alto, said of her political opponents, “They call us Indians as if it’s an insult, but I’m proud to be an Indian!” later adding at a MAS rally that,

In this election we’ll vote against racism. October 18 is where we recover the dignity of our indigenous cultures, where we say no to hate and division. We’ll say no to violence, because we come from the culture of peace. We’ll destroy the whole idea of ‘fraud’ [referring to Morales’ disputed electoral victory last year] which they used to steal the election from Bolivia’s indigenous peoples. The city of El Alto has always been a tomb for tyrants and we’ll prove that again on October 18.”

Part of indigenous identity in Bolivia is a respect, even reverence, for the natural environment, which they call “Pachamama” (Mother Earth). Leonardo Loza, a leader of the Chimore Union Federation and MAS candidate for senate in the city of Cochabamba explained why so many inside the country see this election as a turning point in the country’s history.

A little known senator from a party that received only four percent of the vote in last October’s election that Morales won (before being ejected by the military on spurious vote rigging charges), Jeanine Añez was an unlikely choice for president. A strongly conservative Christian, she arrived at the presidential palace brandishing a massive, leather bound bible, proclaiming that God was returning to government. Much of Bolivia’s Christian right see indigenous people as lesser citizens. Añez herself had previously described the country’s indigenous majority as “satanic” and suggested they should not be allowed to live in cities but should be relegated to the highlands or the deserts. In this election, Bolivia’s far-right have campaigned on the slogan “creemos” (we believe), presenting themselves, the true believers, against the satanic non-believers who still worship Mother Earth.

During the November coup, leaders burned the Wiphala flag in the streets, while security forces ripped off and burned the Wiphala patch that was added to their uniforms, a gesture symbolizing a return to a country with a strict racial hierarchy. “The burning of our Wiphala was what hurt the most, absolutely,” said Franklin Flores, an Aymara MAS lawmaker. “The way our mothers, our sisters, our daughters were beaten with sticks and gassed by the police, just for being indigenous. That hurt our soul and it always will, we’ll never forget those moments. With our vote now we can overcome all that and give back dignity to our people.”

In order to force the recently re-elected Morales from office in November, the country’s right-wing relied on a campaign of violence against MAS officials. Patricia Arce, mayor of the town of Vinto, for example, was captured, had her hair shaved off, and her body painted red before she was publicly dragged through the streets barefoot, her captors abusing her forcing her to agree to leave office. Morales made clear that he was only leaving to avert a bloodbath.

Once in power, Añez certainly did not have it all her own way, and was met with stiff but mostly uncoordinated resistance to the coup from the country’s indigenous and working-class. She quickly signed an official order pre-exonerating all security services from any crimes committed during the “re-establishment of order,” effectively giving the army and the police a license to kill anyone who opposed her. This they immediately used, carrying out a number of massacres against MAS supporters.

“During this coup, we, as indigenous women, have been treated worse than animals, I think to them we don’t exist, but that pain hasn’t been for nothing,” said Juanita Ancieta, Secretary of International Relations for the MAS, and an indigenous Quechua woman.

Our children have risen up with enormous strength in defense of indigenous women, that brings us huge joy, huge pride. These elections are the chance to end that discrimination, that racism, and we’ll do it with our vote, we don’t need violence because we want to build a government of peace. I want to say to the right, that we are Bolivians too, even if we have ideological differences, we’re all humans in our Pachamama,” she added.

Since the European conquest, much of Latin America has been exploited as a vast mineral resource, enriching Europeans, and later, North Americans. Bolivia was no exception. From its discovery in 1545, the vast silver mountain of Potosí (which, for centuries, produced more than half the world’s supply of silver) enriched the Spanish king and funded Madrid’s escapades around Europe and the world. Just 50 years after its founding, the city of Potosí had a population equal to that of London or Paris. Today, the silver is mostly gone. But Bolivia is still rich in tin, hydrocarbons, and lithium. Morales attempted to redress the balance by nationalizing the country’s mineral wealth, using the proceeds to fund ambitious anti-poverty projects. This may have sealed his fate; Morales contends that the events of November constituted a “lithium coup,” a notion backed up by Tesla CEO Elon Musk. When challenged on his role in the coup, the billionaire (whose electric vehicles require vast amounts of lithium for batteries) responded, “We will coup whoever we want! Deal with it.”

During his time in office, Morales emerged as one of the world’s foremost critics of the international system, continually asserting that unfettered capitalism was the root cause of human suffering. Internationally, he opposed U.S. imperialism and attempted to build far reaching networks with other independently-minded Latin American countries, all while promoting Palestinian rights and Boycott Divestment and Sanctions against Israel. In 2015, his presidential plane was grounded in Europe after it was alleged that American dissident Edward Snowden might be on board en route to a new life of asylum in Bolivia. Diego Pary, an indigenous Quechua and Morales’ Foreign Minister until the 2019 coup, said that, A Queen Elizabeth I monument is covered in an Indigenous “Chola” outfit during a protest against colonization in La Paz, Oct. 12, 2020. Juan Karita | AP

As they wrap up their election campaign, the Movement to Socialism appears in a confident mood. A recent poll shows Luis Arce at 42 percent nationally, more than 9 points ahead of his nearest challenger Carlos Mesa (who was president between 2003 and 2005). Under the Bolivian system, if any candidate wins over 40 percent of the vote in the first round and is 10 points clear of second place, there is no second round runoff election. The Bolivian right obviously sees the danger, with Añez herself recently dropping out of the race to rally support around one candidate. Thus, unless projections are wildly inaccurate, a fair vote on Sunday will have the MAS in a strong position.

Yet there are serious concerns the election (which has already been postponed multiple times) will be far from fair. “Citizen observers” are being directly paid by U.S. government organizations USAID and the National Endowment for Democracy, groups expelled from Bolivia under Morales’ premiership for interference in domestic affairs. In the wake of the coup, the U.S. expressed its delight at what it called the “preservation of democracy,” releasing a statement that all but said, “we did it.” Since then, it has continued to back Añez.

Añez’s government is also trying to impose a 48-hour lockdown straight after the election, claiming it is an anti-COVID-19 measure. However, critics allege it could be an attempt to stop protests against upcoming electoral fraud.

Henry Nina, the president of the Intercultural Confederation, the country’s largest indigenous organization, was confident that justice would be achieved.

We’re going to win back our identity, as the 36 indigenous and Afro nations of Bolivia, recognized by the constitution that we fought for. They’ve discriminated against us, they’ve dismantled our institutions such as the Ministry of Culture, a people without origin and without culture is not a people. This is why we have to rebuild democracy on October 18, so as to be able to rebuild our culture and our identity.”

Sunday represents Bolivia’s best chance to secure lasting peace, with a resounding MAS victory being a repudiation of the right’s military coup in November. Already, through constant struggle, the country’s indigenous groups and trade unions have forced the government to concede to an election. The question remains, however, if it loses, how will the government react?

0 thoughts on “Bolivia: First Election Since US-Backed Coup Pits Right against Left, Rich Against Poor and White against Everyone Else”