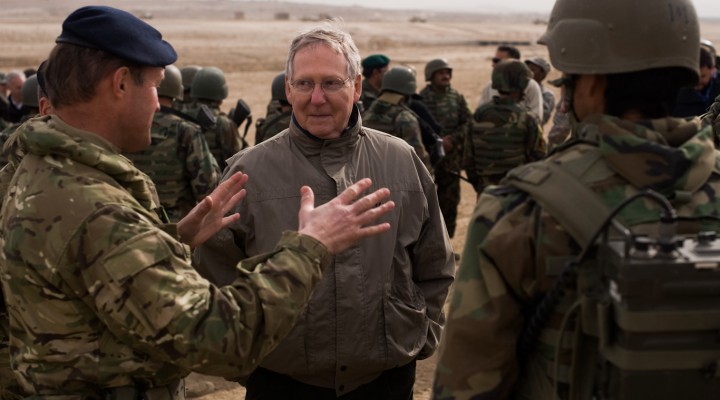 The new $1 trillion GOP HEALS act includes billions for F-35 fighters, Apache Helicopters, and other welfare programs for the Pentagon.

MPN– On Monday the Senate GOP released their outline for a new $1 trillion coronavirus stimulus package. A successor to March’s CARES Act, the 177-page document, named the HEALS Act, includes no funding for hazard pay, the Postal Service, state and local governments, nutrition assistance, or help for uninsured or underinsured Americans, but incorporates a $29.4 billion bonanza for the Pentagon.

The package is presented as a necessary measure to help the country fight the COVID-19 pandemic, which has so far caused the deaths of nearly 153,000 Americans. But it appears that the GOP had a very different enemy in mind when writing some parts of it. “To prevent, prepare for, and respond to coronavirus, domestically and internationally,” the bill (pp. 35-38) allocates $686 million for the purchase of extra Lockheed Martin F-35 fighter jets, $650 million for A-10 Warthog fighter-bombers, $720 million for C-130J transport planes, $283 million for AH-64 Apache attack helicopters and $1.068 billion for P-8A Poseidon anti-submarine aircraft.

It is not just the Air Force that will benefit from the new bill; it also includes $41.4 million for Raytheon missiles, $260 million for a new Navy fast transport ship, $250 million for amphibious shipbuilding programs and $375 million for armored combat vehicles. Most of these military spending requests are ones that had previously been subject to cuts in February as the Trump administration moved Pentagon money around to fund construction of the border wall. The plan also allocates (p. 11) $1.75 billion to the FBI for the design and construction of a huge new facility in Washington, D.C.

The new HEALS Act, which differs both in scope and its recipients from the $3 trillion Democrat-backed Heroes Act, which President Trump has promised will be “dead on arrival.” Unsurprisingly, Democrats have condemned the new plan. “The bill contains billions of dollars for programs unrelated to the coronavirus, including over $8 billion for what appears to be a wish-list from the Department of Defense for manufacturing of planes, ships, and other weapons systems,” said Vermont Sen. Patrick Leahy. “The bill provides nothing to address the long lines at food banks and shortchanges education and childcare, but we can shore up the defense industry? I am at a loss for words.” “Amphibious ships don’t feed hungry children,” added House Appropriations Committee Chair Nita Lowey (D-NY).

Yet Democrats have supported other sections of the bill, particularly that to do with cutting unemployment benefits. While providing a second $1,200 check, the HEALS Act also reduces unemployment payments from $600 to $200 per week, although in the long term it would move to a system where the government would pay up to 70 percent of a worker’s pre-COVID wages, a setup that most of Europe opted for in the beginning. “Look, it’s not $600 or bust,” said House Majority Leader Steny Hoyer (D-MD), claiming that a weekly $600 check serves as a disincentive to many to start working again.

The proposed act also ensures that businesses and other entities have near blanket immunity from coronavirus-related lawsuits coming from customers and employees. “Mitch McConnell’s new coronavirus ‘relief’ proposal is an utter disgrace. It somehow manages to make the pandemic and economic pain even worse,” wrote consumer advocacy group Public Citizen, labeling it a “brazen giveaway” to big business and the military.

A lack of popular support

Far from wishing to increase spending, a poll conducted earlier this month showed that the majority of Americans (including 69 percent of Democrats) supported Bernie Sanders’ proposal to cut the $740 billion Pentagon budget by ten percent, using the savings to fight the coronavirus and the impending housing crisis it is causing. Yet Democrats in both the House and Senate joined with the GOP to vote down the idea. The $74 billion in savings, the National Priorities Project calculated, would have been enough to end homelessness, pay for 2 billion COVID-19 tests, create one million green energy jobs, or hire 900,000 extra school teachers.

The U.S. military budget rivals that of the rest of the world combined, with the majority of federal discretionary spending already going on warfare. Earlier this month, Congress and the Senate passed Trump’s massive $740 billion military bill, an increase from previous years. Yet it seems too much can never be enough for defense contractors. While it is far from clear how attack helicopters and cruise missiles will help during a pandemic, it is not hard to see who will benefit from the new bill and whose interests are really being served.

In Military Service To The US And… Satan

Why So Few American Muslims Serve in the US Military