HOME / WORLD / Moment of truth in the ‘Idlib Crisis’ 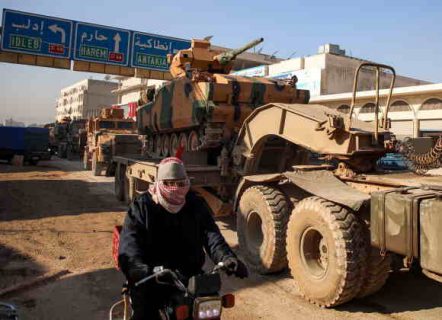 Whether Turkey mounts its threatened offensive or not, Assad seems set to emerge with more territory and Erdogan with more refugees

With Turkish President Recep Tayyip Erdogan’s ultimatum for Syrian troops to withdraw from the areas of Idlib province they recaptured due to expire on Saturday; with growing numbers of Turkish soldiers getting killed in Syria; and with the third round of Russian–Turkish talks in Ankara failing to reach agreement and being carried on into Friday; the coming few days look like being decisive in resolving the ‘Idlib Crisis’, either peacefully or by war.

Russia is not taking the ultimatum seriously and is preparing to confront any Turkish bid to retake the Syrian army positions by force – as evidenced by President Vladimir Putin’s refusal to agree to Erdogan’s appeals to convene a summit meeting on the matter, whether bilateral, trilateral (including Iran) or four-way (involving German and France).

Many observers are puzzled by Erdogan’s behaviour. Why is he taking such an intransigent and apparently reckless stance that risks destroying his relations with Russia and plunging his army into a bloody war of attrition in Syria with virtually no support – his Arab, American and European allies having effectively abandoned him?

There are four main reasons for this.

One has to do with Erdogan’s proud and stubborn personality: he cannot bear to appear to have been defeated or to have compromised or made concessions to his arch-enemies, especially Syrian President Bashar al-Asad who he has spent the past nine years trying to overthrow by force.

Secondly, toppling the Syrian regime is not Erdogan’s priority right now. He knows that goal has become unachievable. His main concern is to prevent a further influx of Syrian refugees into Turkey: either by establishing an ‘Islamic Emirate’ in Idlib which can accommodate them along its the various ‘terrorist’ and ‘moderate’ armed groups; or to retake all the territory captured by the Syrian army in the past few weeks and send the refugees who have been massing on the Turkish border back there.

A third reason is that Erdogan faces a massive dilemma in Idlib. What does he do with the hard-line Islamist armed groups he created there formed of Turkish or ethnically Turkic fighters – such as the Sultan Murat Brigades, the Sultan Mehmet Fatih Brigade, the Martyr Zaki Turkomani Battalion, the Samarkand Brigade and the mainly Chechen Ajnad al-Kavkaz (some of which have merged either into the Sultan Murat organization or Hay’ at Tahrir ash-Sham – the former Nusra Front)? He does not want to allow them into Turkey, where they could turn against him for having abandoned Idlib and foiled their ambitions to destroy Asad’s regime and establish an Islamic state in Syria that would be part of a new Ottoman Empire. But nor does he want to see them decimated by the Syrian army with Russian backing. He has the same problem with the Syrian armed groups that he sponsored and promised to help overthrow the regime, and which are now bitterly criticising him.

Last and not least, Erdogan is facing a resurgence of opposition in Turkey itself, reportedly including mounting discontent within sections of the army. There is increasingly vocal opposition to military involvement in Syria, mounting concern about the prospect of casualties, and a growing clamour for Ankara to concede that Asad is staying in power and to restore relations with Damascus.

One can only speculate about what will happen in the next few days. But we can be sure that any major Turkish army offensive to eject Syrian government forces from the areas they recaptured in the Idlib countryside would prove highly costly. And not just to the Syrian army. The twelve Turkish army observation posts set up in the province under the September 2018 Sochi accords, several of which are now behind Syrian army lines, could be completely obliterated.

Russia still controls Syria’s airspace above Idlib and has consistently refused to allow the Turkish air force to operate in it. That means that if the Turkish army launches an assault on Syrian army positions it will have no air cover and will be vulnerable to Russian and Syrian airstrikes as well as ground-based missile and artillery attacks.

Erdogan is in a real predicament. He could go for broke and order an all-out assault in Syria, knowing he would be fighting alone after having been abandoned by all his allies including the Americans – as he remarked bitterly to journalists accompanying him on his flight home from his official visit to Azerbaijan. It is clear that he is not minded to surrender. But neither are the Russians minded to throw him a lifeline, and it is they he will have to confront if he goes ahead with an offensive.

There is much speculation about how this crisis may unfold. Some expect a last-minute agreement to avoid a military showdown. Others anticipate a Turkish offensive that goes beyond the borders of the Idlib countryside. Personally, I share the prognosis made by a Western expert who keeps a close watch on Syria: Asad will emerge with more territory and Erdogan with more refugees.

Russia Deploys its ‘NATO Killer’ Smersh 300mm Against Turkey, but Why is Erdogan Laughing?

Turkey, So Much We Aren’t Being Told

0 thoughts on “Moment of truth in the ‘Idlib Crisis’”