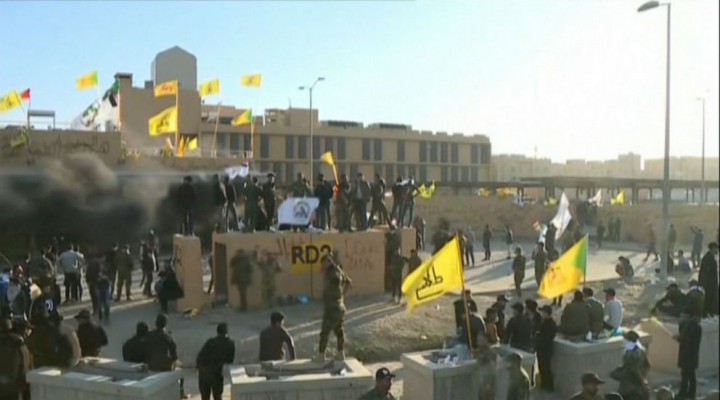 Will 2020 see the US being finally forced to pull out its remaining troops?

Seventeen years after ‘liberating’ Iraq and deposing the regime of President Saddam Hussein – with the loss of 4,000 troops and the injury of 33,000, and at a cost of $6 trillion — the US is back at square one. Its costly investment has come to nothing, and it is not even capable of safeguarding its embassy in Baghdad, the largest and most expensive in the world.

On Monday, thousands of Iraqi demonstrators, supporters of the Hashd ash-Shaabi (Popular Mobilisation Forces) and others, converged on the embassy in Baghdad’s Green Zone and broke through the gates into the compound. They were protesting against Sunday’s US airstrikes targeting the Iraqi Kataib Hezbollah that killed at least 25 of the group’s members and wounded dozens.

The action was taken in retaliation for the death of an American contractor and the injury of several soldiers in a rocket attack on the US’ K1 military base near Kirkuk. Yet the Americans did not retaliate against targets in Iran when Iranian air defences shot down a US spy drone over the Strait of Hormuz in June. Nor did President Trump respond to the Houthi missile and drone bombardment of Saudi Arabia’s Abqaiq oil complex in September, despite having pledged to defend America’s allies with military force, and despite blaming Iran for the attack.

The reason is clear. The Trump Administration only wants to wage war against Iran by proxy, and only in Iraq for the time being, for fear of provoking massive Iranian military retribution should it engage the country directly. The downing of the state-of-the-art drone at high altitude dealt it an unexpected shock, alerting it to the sophistication of Iran’s home-made weaponry and its capacity for springing surprises.

It is unlikely that the Hashd ash-Shaabi’s response to blatant American aggression against one of its affiliates will be confined to protest demonstrations outside the embassy. We could well see painful missile strikes directed in the coming few days against the 5,200 American troops deployed in north-western Iraq.

By attacking the Kataib Hezbollah base, Trump has opened the gates of hell on his country’s forces and interests, not only in Iraq, but perhaps further afield in the Gulf and the entire Middle East. He clearly does not know the Iraqi people, nor appreciate the resolve of the resistance groups on the ground to fight back. He learned nothing from his country’s earlier defeats that compelled his predecessor Barack Obama to pull US forces out of the country at the end of 2011 to cut their losses.

Today’s Iraq is not the enfeebled country, barely emerging from a crippling 13-year blockade, it was when the US invaded and occupied it in 2003. Today’s Iraq is a well-armed member of a regional ‘Axis of Resistance’ that has the upper hand in the region and possesses hundreds of thousands of missiles of every size, range and capability.

2011 went down in history as the year a defeated US was forced to withdraw it troops and flee from Iraq. 2020 could well go down as the year of the second defeat and the flight of 6,000 American troops from Iraq and Syria to save their skins. Just wait and see.

0 thoughts on “Courting defeat in Iraq”