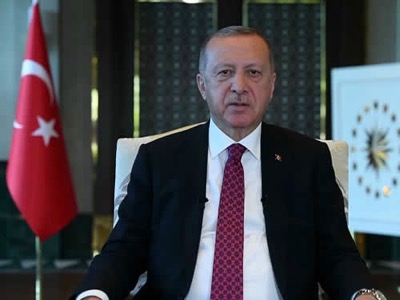 In Islam, the role of Imam does not fall to a theologian, but like Christianity in Roman times, to the most powerful head of State. The function of Caliphe has therefore become a political rather than a spiritual gamble. After having believed that the Caliphate of Daesh could offer Turkey the possibility of reclaiming its Ottoman splendour, President Erdoğan realised that, on the contrary, he risked hurling his country into a state of barbarism.

In the 18th century, during the Crimean War, the Tsar was the first head of State to recognise the double political and spiritual nature of the role of the Caliphe. Constantinople had lost the military confrontation, but its Sultan had maintained an influence over the souls of the Tatar people.

The sultans had auto-proclaimed themselves as the successors of Mahomet, due to the place they had won in the History of the Muslim world by the power of their sabres. In the absence of rivals, they took on the spiritual guidance of the faithful, including those outside of their Empire.

At the end of the First World War, when the Empire had been definitively vanquished and dissolved, Mustafa Kemal was extremely troubled by his heritage. He attempted to separate the temporal power, over which he had some sway, from the spiritual power, which he tried in vain to transmit successively to an Arab personality and then to an Indian personality. Finally, he was able to find no other solution than to abolish the Caliphate on 5 March 1924, and to proceed with the modernisation of Turkey [1].

For the King of England and the head of the Anglican Church, George V, it thus became possible to incorporate the Caliphate into one of its colonies, and thereby seize spiritual power over all Muslims. This was what King Fouad 1st attempted in colonised Egypt – in vain.

In 1928, Hassan el-Banna created the Muslim Brotherhood in order to regenerate Egyptian society. Its activity was exclusively moralistic. However, it made clear the fact that once the life of the people had been « Islamised », it would become necessary to unite Muslims around the Caliphate, and then extend the system to the world. King Fouad 1st saw in this a powerful support for his collaborationist régime with the British Empire. He therefore presented candidates for the legislative elections in 1942 and had the secular Prime Minister assassinated in 1948, according to the expectations of King Farouk.

As for the philosopher of the Brotherhood, Sayyed Qutb, he described the Caliphate not as an ideal to be attained in the distant future, but as the ripe fruit of social regeneration. Anouar el-Sadate, with whom he had served as a liaison officer between the Brotherhood and the « Free Officers », found his way to the Presidency of Egypt thanks to the support of the CIA. He Islamised society and prepared for his proclamation as Caliphe by the Parliament. But the Brotherhood was not playing the same game, and had him assassinated by Ayman al-Zawahiri’s Islamic Jihad [2].

Identically, Daesh considered – against the advice of Ayman al-Zahawiri, who had become the emir of Al-Qaïda – that it had imposed « Islamic » order and attained a perfect society in Rakka. It therefore had the lawful right to proclaim the Caliphate on 14 June 2014.

However, according to the report of the participation by the Turkish secret services in the preparatory meeting for the conquest of Iraq by Daesh (Amman, 27 May to 1 June 2014), as revealed by the Turkish daily Özgür Gündem, this proclamation had not been mentioned by the Anglo-Israëlo-US participants [3]. It was therefore possible that this was an initiative by mercenaries of the Islamic State which exceeded their mission. In any case, for Ankara, the Caliphate provided the occasion to win back the spiritual power which had been lost over the whole of the Muslim world.

Logically, Islamist Turkey supported Daesh without reserve. Only Russia denounced this state of affairs, first during the G20 in Antalya (November 2015), then by five Intelligence reports which were handed to the United Nations Security Council between 29 January and 17 May 2016 [4]

The military failure of the Caliphate facing the Syrian and Iraqi armies revealed to Turkey the worst possible image of itself. There is no difference between Tamerlane’s hordes charging on Baghdad and the convoys of Toyotas taking Mosul [5]. There is no difference either between the genocide of non-Muslims – including Armenian Christians – by Sultan Habdul Hamid II, followed by the young Turks, and that of the Yezedi Turks and the industrial-line decapitation of secular citizens. Within a few months, all of the work accomplished by Mustafa Kemal to abandon the barbarism of the « children of the steppe wolf » and construct a modern Turkey, was completely destroyed.

We must therefore take very seriously the change that occurred in Ankara on the occasion of the 3rd anniversary of the attempted assassination of President Recep Tayyip Erdoğan in Marmara, and the improvised coup d’etat which followed. The way of the Muslim Brotherhood dragged the country into a dead end of horror and violence. After having imagined itself as the « Protector » of the Brotherhood, the AKP was once again obliged to return to the separation of moralistic values and politics, in the wake of Atatürk. This was not a choice, but a vital necessity [6].

The propaganda according to which the pseudo-« Rojava » sheltered no element of Daesh, and the vague agreement concluded with the United States concerning Northern Syria will change nothing of this about-face. They will do no more than postpone its clarification a little longer. Ankara can only pursue the Astana-Nour process.

This is why, in his video message for the Aïd al-Adha, President Recep Tayyip Erdoğan reminded his audience of the unitary character of the ritual, in memory of the Judeo-Christian-Muslim revelation of Abraham, then the Turkish military victories, and ended his speech with a curious appeal concerning road safety. Ankara is turning carefully to a redefinition of its identity, no longer religious, but nationalist, no longer exclusive, but inclusive.