HOME / WORLD / Bringing Syria back into the Arab fold 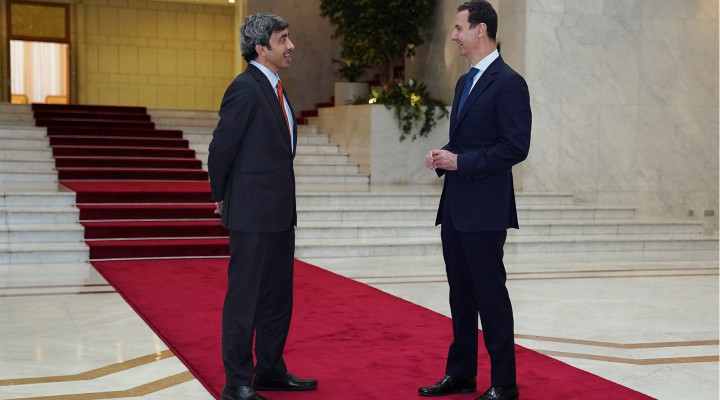 Why former supporters of regime-change now want to rebuild bridges

The warm welcome laid on for UAE Foreign Minister Sheikh Abdullah bin-Zayed when he visited Damascus and met with President Bashar al-Assad the first time since the Syrian crisis began a decade ago confirms some fundamental facts.

First: The Syrian leadership currently affords greater priority and focus to the internal situation than foreign affairs, and Arab politics in particular. In other words, it has become more ‘pragmatic’, and what matters to it most at present is to break the US blockade and attract investments to alleviate the country’s stifling economic crisis and improve living conditions.

Second: Absolute precedence is being given to the reconstruction ‘battle’, and Syria will not shun any country (except Israel) that will allow its companies to contribute to the process, as a Syrian source told Raialyoum . This also explains the top-level reception accorded in Damascus to a Saudi delegation headed by intelligence head Gen. Khaled al-Humaidan, Asad’s phone call to the crown prince of Abu Dhabi, and his bid to strengthen ties with Oman.

Third: By opening up to Syria the UAE seeks to atone in some way in the eyes of the Arab public for its normalization of relations with Israel, which was widely condemned on social media and viewed as a betrayal.

Fourth: The Arab states that isolated Syria and expelled it from the Arab League are now more eager than Damascus itself to rehabilitate it, following the failure of the US-led scheme to force regime-change by sponsoring armed insurgents and offshore political opposition groups.

Fifth: Most of the Gulf states that were complicit in that scheme, including the UAE, have reached a firm conviction that there is no way of severing the strategic bond between Damascus and Tehran, regardless of financial incentives or military pressures. Had the Syrian leadership agreed to distance itself from Iran it would never have been subjected to this decade-long onslaught in the first place.

Sixth: There American in the Middle East as whole showing growing signs of defeat, from Afghanistan to Syria and Iraq, from where the US administration is also poised to withdraw its forces.

Seventh: Washington’s professed anger at the Emirati minister for visiting Damascus and conferring with Asad was a smokescreen. The administration is well aware that its bid to impose a global blockade on Syria via the Caesar Act collapsing. By recently allowing to reopen its Damascus office and liaise with the Syrian government it tacitly recognised the latter’s legitimacy.

Eighth: Bin-Zayed conveyed an official invitation from his brother, Abu Dhabi’s Crown Prince and the UAE’s de facto ruler Sheikh Mohammed bin-Zayed, to visit the Emirates capital. This would not have been done without the approval or non-objection of the US and the blessing of most, if not all, the other Gulf states.

Ninth: Algerian President ′Abdelmadjid Tebboune has confirmed that Syria will regain its seat in the Arab League and take part in the upcoming Arab summit to be held in Algeria next March. Egypt also supports its reinstatement, as confirmed when the two counties’ foreign met during the UN General Assembly session in September, and the UAE has pledged to back the move.

Tenth: Russia strongly supports its Syrian ally’s return to the Arab League and resumption of its role in joint Arab action. This is routinely stressed to all Arab delegations that visit Moscow, according to diplomatic sources there.

There is no question that Asad will take up the invitation to visit Abu Dhabi and Syria. The question when, before or after the Aran Summit, and what security guarantees will be needed.

Another, more pressing question is who will be the next Arab foreign minister to make a fence-mending visit to the Syrian capital: Egypt’s, Bahrain’s, or Saudi Arabia’s?

Iran & Syria: How Arab and Western countries are shifting posturing toward Damascus

0 thoughts on “Bringing Syria back into the Arab fold”