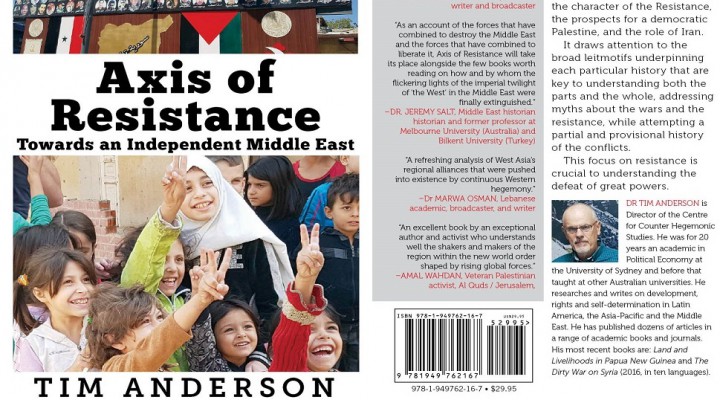 EXCERPT from the Introduction

In the series of 21st century wars in West Asia, initiated by Washington in the name of a ‘New Middle East’, resistance forces are prevailing. Like all imperial gambits before it the plan has been to subjugate the entire region – this one in the name of US-led ‘freedom’ – to secure privileged access to its tremendous resources and then dictate terms of access to all other players. On various pretexts Afghanistan and Iraq were invaded and Libya was destroyed. Washington made good use of its client states, Israel and Saudi Arabia, to divide and weaken the independent states and peoples. However, Israel’s attempts to disarm the Lebanese resistance failed, huge Saudi and Qatari-backed proxy wars against Syria and Iraq were eventually put down, the indigenous insurrection in Yemen cannot be defeated and the Islamic Republic of Iran, the center of imperial obsession,remains strong.

The key to a definitive defeat of Washington’s ambitions lies in greater regional integration of the resistance forces. That integration is led by Iran, the undisputed leader of an ‘Axis of Resistance’ to foreign domination and Zionist expansion. Tehran’s position has less to do with its religious identity and more to do with its principled independence, great capacity and independent political will. Russia has become an important ally of this Axis but – because of its wider interests and its compromised relationship with Israel – we cannot regard it as a full member of the regional resistance. Yet Iran and the other Axis countries have formed an alliance with Russia, to frustrate Washington’s regional ambition and preserve their own security (Naqqash 2019).

Iran’s importance is seen through Tel Aviv’s fear of Tehran ‘at Israel’s borders’, and through Washington’s obsessive jealousy at the Islamic Republic’s regional influence. When Zionist analysts and think tanks warn of the danger of a ‘widening Iranian corridor’ or ‘land bridge’ from Tehran to Beirut (Debka 2018; Lappin 2018), they tell us that independent Arab and Muslim regional integration remains their great fear. There would be substantial benefits in such integration for the peoples of the region. However, imperialism wants to keep those peoples weak and divided. That reminds us why imperialism is such a great enemy of human society. It is also why, in the final stages of the failed war on Syria, the task of US occupation forces has been to block key border crossings between Iraq and Syria (Mylroie 2018). Such obstruction is unlikely to last.

This book, Axis of Resistance: towards an independent Middle East, follows my 2016 book The Dirty War on Syria, examining the end of the war on Syria and exploring wider elements of the regional conflict. Behind the particular histories there are three basic propositions.

First, there is a single – and an essentially colonial – war in the Middle East or West Asian region. This hybrid war drives each particular conflict, from Libya to Afghanistan, and has several features: propaganda offensives promoting the heroic role of a US-led coalition improbably delivering ‘freedom’ from a long line of supposed ‘brutal dictators’; economic siege warfare through sanctions and blockades; terrorist proxy wars; direct invasions followed by military occupations; and repression through client state regimes. In 2006 the Bush administration called this project the ‘New Middle East’ (Condoleezza Rice in Bransten 2006). In 2009 Obama declared that it involved a ‘new beginning’ with Islam (Obama 2009). That marked a shift from direct invasions to greater use of sectarian, Saudi-style ‘Islamist’ proxy armies. Yet it seems these were as much mercenary militia as religious zealots. The strategy of this regional war has been to destroy the independent states of the region, subjugate independent peoples and dominate the entire region. By this logic, resistance forces must be kept fragmented. Regardless of any specific pretext for each conflict, the wave of bloody aggression has a single aim: to secure privileged access to the region’s resources and so dictate terms of access to Russia, China and any other outside power. The fact that other powers are subject to this jealous focus does not imply that they are themselves imperial powers, and that we are therefore witnessing inter-imperial rivalry. It simply demonstrates that would-be empires are always obsessed with the fear of the next large, potential rival.

Second, while the extraordinary pretexts for each war must be studied, with independent evidence, they cannot be fully understood separately. Each aggression forms part of a broader strategy. The separate wars can be seen most clearly with regard to the regional plan, and indeed the globalist ambitions of the patron.

Similarly, the resistance in particular countries can and should be studied, but their integration into the regional resistance remains critical to their success. No single independent state or people has the capacity to prevail against this onslaught. As Cuba’s national hero Jose Marti said of the independent nationsof Latin America in the late 19th century, facing both the Spanish and the rising North American empire: ‘The trees must form ranks to keep the giant with seven-league boots from passing! … we must move in lines as compact as the veins of silver that lie at the roots of the Andes’ (Martí 1892). Small states and peoples cannot fight big powers alone; they must form a strong alliance.

Third, the resistance to foreign domination in each country, and regionally, is the historical outcome of particular forces. Resistance has a common character but no idealized personality. It is informed by different cultural and religious principles, historical circumstances and social formations. Yet the common defense is of popular self-determination and maintaining accountable social structures that serve broad social interests. In every circumstance imperial intervention is destructive of that accountability and those interests. So it is that, in the West Asian region, the Resistance combines secular-pluralist, Shi’a and Sunni Muslim, Christian, Druze, socialist, secular and Arab nationalist traditions. Notwithstanding the fact that organised resistance requires strong social structures, the primary contradiction of this struggle is not ‘capitalism v socialism’ but rather imperialism versus independence. No social gains can be built without an independent and locally accountable body politic; nor can they be defended in face of the sustained onslaught without strong regional coordination and collective action.

0 thoughts on “AXIS OF RESISTANCE- Towards an Independent Middle East”