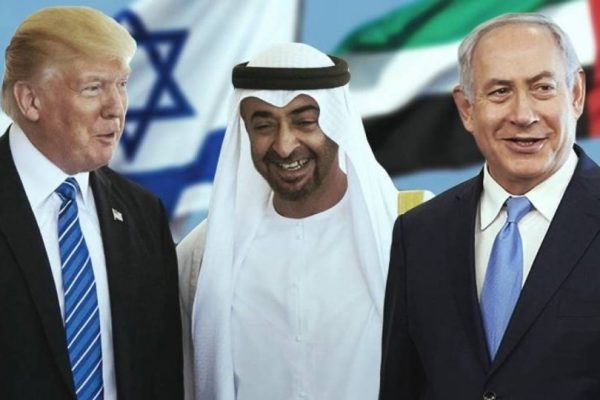 Great for Trump but More Bad News for the Middle East

The decision made this week by the United Arab Emirates and Israel to establish full diplomatic relations as part of a commitment to normalize the interaction between the two countries was characteristically announced by President Donald Trump because he is, undoubtedly, the main beneficiary. With less than three months to go until the U.S. national election, the timing of the announcement was not fortuitous as the president clearly needed some good news. There are reports that the agreement will be signed in a formal ceremonial meeting in the White House later this month.

The deal, reportedly set up by White House Special Assistant to the President and son-in-law Jared Kushner, will in fact have little impact on the UAE, whose Crown Prince and head of state of Abu Dhabi Mohamed bin Zayed was instrumental in coming to an agreement on behalf of all of the Emirates. He issued a statement on the understanding reached, stating that “During a call with President Trump and Prime Minister Netanyahu, an agreement was reached to stop further Israeli annexation of Palestinian territories. The UAE and Israel also agreed to cooperation and setting a roadmap towards establishing a bilateral relationship.”

As usual, the big losers will be the Palestinians, who will now live in a non-country that they inhabit only under Israeli sufferance, an arrangement that is now de factoendorsed by some of its Arab neighbors and by the Europeans, leaving them with no friends or advocates. They immediately declared that the agreement is not binding on them. Indeed, little will actually change on the ground in Israel-Palestine. Israel has indeed agreed to further “temporarily postpone” its oft stated commitment to annex most of the Palestinian West Bank, a proposition that was already in trouble both domestically and due to almost universal international censure. Even some Democratic Party congressmen had developed a spine over the issue and were willing to cut military assistance to the Jewish state if the annexation program were to move forward. Now that the word annexation has been dropped, the fundamental apartheid policies pursued by Israel will continue to advance and the illegal settlements will presumably continue to expand.

The agreement will also benefit beleaguered Israeli Prime Minister Benjamin Netanyahu politically to a certain extent, giving him some favorable press from liberal Israelis and Europeans, though he will also face a backlash from the powerful West Bank settlers. But at the same time, it must be recognized that he obtained something for nothing, for which he will be praised inside Israel. Annexation was on hold anyway and now the Israelis will be credited with taking a “step for peace,” a step that is in fact being endorsed by an Arab country. It will be exploited by Israeli propagandists to lighten the pervasive criticism of Israel as a “pariah” state and will allow the continued delegitimization of the Palestine pursuit of justice.

So, Trump will be the big winner, clearly by design, because it in a stroke transforms him from a loser foreign policy neophyte and international laughing stock into a man who can now claim a major success in making progress on one of the world’s most intractable conflicts. The news immediately drew rave reviews from America’s friends in Europe and Asia, most of whom have long been caught metaphorically between the Israeli rock and the Palestinian hard place and have been looking for a way out. It was a change from the usual brickbats that the president had become accustomed to receiving, and the U.S. media was also enthusiastic, though less for Trump and more for making Israel “safer” while also casting it in a positive light.

The New York Times is seeing a “broader realignment for the region” which “…could reorder the long stalemate…potentially leading other Arab nations to follow suit.” Such an outcome would mostly benefit Israel, though the Times article does not explicitly say so and Trump framed his announcement more broadly, asserting that “This deal is a significant step towards building a more peaceful, secure and prosperous Middle East. Now that the ice has been broken, I expect more Arab and Muslim countries will follow the United Arab Emirates’ lead.” He then quipped that the agreement should actually be called the “Donald J. Trump Accord” while his national security adviser Robert C. O’Brien later declared that the president “should win the Nobel Peace Prize.”

The overwhelmingly Sunni UAE was clearly motivated in part by its fear of Shi’a dominated Iran and was also undoubtedly subjected to considerable urging by the United States officials around Kushner to help Trump get re-elected. The Gulf countries for reasons of their own are very interested in maintaining Trump in power, so the approach was welcome. One can expect that Kushner and company will now exert maximum pressure to get the Oman and Bahrain to also line up and recognize Israel, and they might also hope to bring in Saudi Arabia. Israel and the anti-Iran coalition countries have had confidential relationships for years, based on mutual hatred of the Persians. Moving forward, any broadening of diplomatic and trade ties could be framed as a grand alliance consisting of the Sunni Arab states and Israel against the greatly feared Iranians. And Washington would undoubtedly supply everyone with the necessary weapons to do the job.

Where will it go from here? America’s upcoming elections will have little impact on the Middle East region as the Joe Biden “I am a Zionist” plus Kamala Harris ticket is, if anything, more closely tied to Israeli interests than is Trump. Israel meanwhile, aided by the U.S., has successfully disrupted Arab unity over Palestine by crafting relationships with states that have never been greatly committed to the Palestinian cause. Jordan and Egypt, heavily bribed by the United States to maintain diplomatic relations with Israel, are now joined by the UAE. If, as expected, more of the Gulf Arab states join in, the Palestinians will be in no position to make any demands on the Israeli government. That constitutes a significant victory for Netanyahu and his government and the Palestinians will now have work to do to make their cause relevant to anyone but themselves. And, of course, an emboldened Netanyahu backed by the United States and his new Arab friends might set his sights on a bigger target, taking care of the “Iran problem.”

0 thoughts on “The United Arab Emirates and Israel Join Hands”