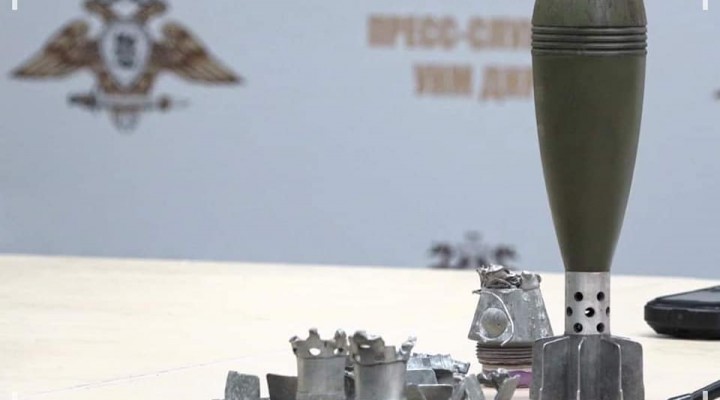 New evidence has emerged of Ukraine’s Army using Serbian weapons in the war in Donbass. Serbia officially has not exported weapons to Ukraine since the beginning of the armed conflict between Ukraine and the self-proclaimed Donetsk People’s Republic (DNR). However, Serbian weapons manufactured in 2016 appear to be used by Ukraine’s Army in the war in Donbass.

This 60 mm Serbian mortar shell M73 HE KV lot 02/16 was found by DNR soldiers in Donbass, according to photos published by the DNR Ministry of Defense on 9 November 2019. The mortar shell was fired by the Ukrainian Army but did not explode. This is not the first documented case of alleged Serbian mortar shells being fired by the Ukrainian Army.

Seems Ukrains army use Serbian mortar shells 60 mm to drop from dron ,interesting how thes mortars come there no official sells for Ukrains?@dgaytandzhieva 21 people are talking about this

Serbian president Alexander Vucic commented that this lot of weapons (15,000 pcs.) was sold by Krusik to the private Serbian company CPR Impex which exported the weapons to the Polish company Natan via Cyprus. However, Ukraine was not indicated as the end user of these Serbian weapons.

The scandal with Serbian arms being trafficked to war zones broke after Arms Watch published an investigation into who arms ISIS terrorists in Yemen. Documents published by Arms Watch reveal that Serbian weapons manufactured by Krusik and sold to Saudi Arabia had ended up with Islamic State terrorists in Yemen.  Three days after Arms Watch broke the story, on 18 September, Serbian prosecutors arrested the Krusik whistleblower Alexander Obradovich.

Instead of investigating the arms trafficking to terrorists in Yemen, the Serbian prosecutors launched an investigation into the leak from Krusik and charged the whistleblower with revealing trade secrets. His arrest caused a wave of protests in Serbia and he was released from prison under house arrest. Yet Alexander Obradovich is under arrest while those who traffic arms go free. The full 4-part investigation into who arms terrorists you can read in the related posts:

0 thoughts on “Serbian arms trafficked to Ukraine: evidence of mortars used against Donbass”