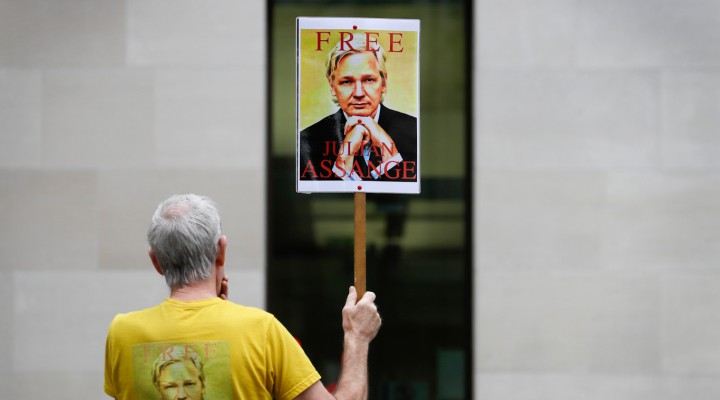 “I have never in my career faced so much difficulty attempting to trial monitor as in Julian Assange’s case.” — Rebecca Vincent, Director of International Campaigns for Reporters Without Borders.

There were bizarre scenes at Westminster Magistrates’ Court in London today, as the extradition process of Wikileaks co-founder Julian Assange (present via videophone from Belmarsh prison) was again delayed.

Proceedings were held up this morning so Assange could converse for the first time in five months with his legal team. The prosecution team failed to turn up at the hearing because they were told events started at 3:30 p.m. Only five members of the press were allowed to enter the courtroom to monitor proceedings. Other journalists, observers, and NGOs attempting to listen via telephone could not, as they were given the number to another courtroom. One journalist who did make it inside claimed that the judge, Vanessa Baraitser, was, “clearly reading from a pre-written ruling.”

Assange sat in a conference room used by the entire prison, without a mask, and was seen coughing a number of times. At one point, proceedings in the courtroom were interrupted by screaming coming from another booth in Belmarsh prison, loud enough to cause a delay. Present at the hearing, Assange’s mother, Christine, warned that he would not survive extradition to the United States.

Perhaps most bizarre, however, is that the United States Department of Justice dropped its original indictment in June, just two days after Assange’s defense team submitted their full and final evidence for the extradition hearing. Today was the first time Assange saw the charges against him. Yet they are almost identical to those previously issued, save for slightly broadening the scope to include some interactions with hacking groups in 2011. The U.S. D.O.J. itself admitted that their new indictment “does not add additional counts to the prior 18-count superseding indictment returned against Assange in May 2019,” leading Wikileaks to allege that the U.S. is attempting to string the process along until after the November election, in order to avoid any negative consequences for the Trump administration. “This was the worst hearing so far,” said Kristinn Hrafnsson, the organization’s current editor-in-chief. “The U.S. government seems to want to change the indictment every time the court meets, but without the defence or Julian himself seeing the relevant documents.” If found guilty, Assange faces up to 175 years in prison.

The defense team, led by Edward Fitzgerald QC, was given a week to decide whether to ask for a hearing scheduled for September 7 to be postponed. However, they must do that without the input of their client, as Belmarsh prison denied them a post hearing video conference.

One consequence of the replacement indictment is the legality of even keeping the hacktivist publisher imprisoned. Baraitser stated that Assange has not even been arrested under the new indictment and is still being held under the old one that is now null and void.

Thus, to recap: the defendant (who is not even legally under arrest) had not even seen the “new” charges (which were the same as the old ones) or met with his defense team for five months, the judge was reportedly reading from a pre-written script, the prosecution did not turn up, journalists could not watch or listen to the proceedings, which were interrupted by screaming from the prison where Assange is being kept.

The Execution of Julian Assange

The farcical events were immediately denounced by onlookers. “I have never in my career faced so much difficulty attempting to trial monitor as in Julian Assange’s case. Whether in person or remotely, there are constant barriers to access. Completely unacceptable,” said Rebecca Vincent, Director of International Campaigns for Reporters Without Borders. Journalist Kevin Gosztola agreed: “Having covered Chelsea Manning’s court martial in a US military court, let me say this clearly: Julian Assange isn’t even being granted the same minimal rights and the same standards of press access that Chelsea had. It’s much, much worse,” he wrote on Twitter.

In 1925, Bohemian writer Frantz Kafka’s posthumous book, “The Trial,” was published, from where we derive the term “Kafkaesque.” “The Trial” tells the story of Josef K., a man arrested and prosecuted in a nightmarish kangaroo court while unable to properly defend himself. Nearly 100 years later, the Australian publisher is being tried in his own kangaroo court, and Kafka’s dystopian fantasies do not seem so unrelatable.