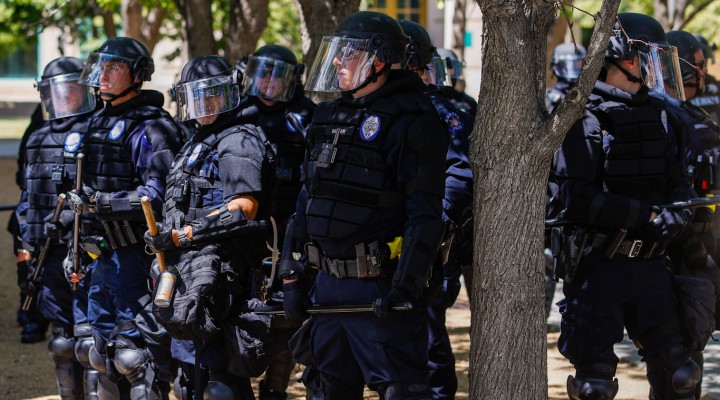 Police in Aurora, Colorado violently cracked down on a group of peaceful protesters holding a vigil for a young black man killed by police late last year, bringing renewed attention to the push for police reform that has swept the nation.

MPN– Clad in full riot gear, wielding batons and pepper spray, police in Aurora, Colo, broke up last night’s vigil to the memory of 23-year-old massage therapist Elijah McClain  — a man killed by the same police force last August. The day had begun with demonstrations organized by the local chapter of the Party for Socialism and Liberation. At 8.30 p.m. a somber violin vigil was held in the city’s Center Park, where dozens of musicians, including children from local orchestras, congregated to mourn his killing last year. Videos of the event show the police charging the sizable crowds, spraying protestors with pepper spray and beating them with their batons.

Aurora PD breaking up the peaceful violin vigil for the very kid they murdered. #ElijahMclain pic.twitter.com/OP4TlawVk5

As #Aurora municipal security forces lost patience with how long it was taking to illegally evict us from the #ElijahMcClain violin vigil, they began deploying chemical agents directly into protesters faces and at protesters that were fleeing while attempting to make arrests pic.twitter.com/ElDeu8Q4LD

Elijah McClain was an introverted 23-year-old black man killed by the police in August of 2019. A quirky, pacifistic vegetarian, he was described by those who knew him as a “child-like spirit.” A lover of music, in his spare time he would visit shelters to play his violin to the homeless cats and dogs, believing it comforted them (hence yesterday’s violin vigil). On the evening of August 24, he was on his way home from buying his brother an iced tea at the convenience store, when he was accosted by three officers, Nathan Woodyard, Jason Rosenblatt, and Randy Roedema, who claimed they were on the lookout for a suspicious person.

The officers quickly put McClain in a now-banned carotid chokehold, cutting off blood supply to his brain. They claimed that the 5’6” 140-pound McClain, medically diagnosed with anemia, fought back with “crazy strength,” and therefore instructed medics to inject him with ketamine, a drug often reserved for tranquilizing horses. He was pronounced brain dead after arriving at the hospital.

Bodycam footage from the event, however, tells another story, showing McClain gasping for air repeatedly saying “I can’t breathe” and officers threatening to unleash their dogs on him if he moved a muscle. Officers also admit that he had done nothing illegal. His final words were:

I can’t breathe. I have my I.D. right here. My name is Elijah McClain. That’s my house. I was just going home. I’m an introvert. I’m just different. That’s all. I’m so sorry. I have no gun. I don’t do that stuff. I don’t do any fighting. Why are you attacking me? I don’t even kill flies! I don’t eat meat! But I don’t judge people, I don’t judge people who do eat meat. Forgive me. All I was trying to do was become better. I will do it. I will do anything. Sacrifice my identity, I’ll do it. You all are phenomenal. You are beautiful and I love you. Try to forgive me. I’m a mood Gemini. I’m sorry. I’m so sorry. Ow, that really hurt. You are all very strong. Teamwork makes the dream work. Oh, I’m sorry I wasn’t trying to do that. I just can’t breathe correctly.

His last words pleading for air closely resemble those of other high profile black victims of police violence, Eric Garner (choked to death by NYPD in 2014) and George Floyd (choked to death by Minneapolis police in May). Indeed, without the protest movement engulfing the nation, it is very likely that McClain’s name would have been forgotten, becoming a statistic; one of over 1,000 civilians police kill, on average, every year in the U.S.

Like with Garner and Floyd’s killers, there has been no justice for McClain. A series of courts refused to prosecute the NYPD officer filmed killing Garner, and he was only fired from his job in 2019. Meanwhile, authorities declined to arrest Minneapolis officer Derek Chauvin until protestors threatened to take over the entire city. It was only on June 20, after huge local rallies and a petition signed by over 3.8 million people that the Aurora Police Department even removed all the officers involved in the killing from regular duty. The message delivered appears to be that it is not the officers’ conduct that led to their censure, but the public outcry forcing police to act.

The actions of the Aurora Police Department come at a time of heightened scrutiny of law enforcement and are sure to add fuel to the fire to those calling for the defunding or abolition of the police entirely. Between May 26 and June 3 the U.S. Press Freedom Tracker identified 180 assaults on journalists covering the protest, 149 of them by the police. This weekend the NYPD broke up an LGBT pride march celebrating the anniversary of the Stonewall riots, where cops ransacked a gay bar in Manhattan. Meanwhile, in Detroit, a police car plowed through a crowd of around a dozen Black Lives Matter activists yesterday. The incident was caught on camera.

A recent Reuters poll found that 39 percent of Americans favored entirely dismantling the police altogether. It is unlikely that the event in Aurora will endear them to any of the undecided population concerned about police brutality.

Feature photo | Officers in riot gear guard the police department Saturday, June 27, 2020, in Aurora, Colo., during a rally and march over the death of Elijah McClain. David Zalubowski | AP