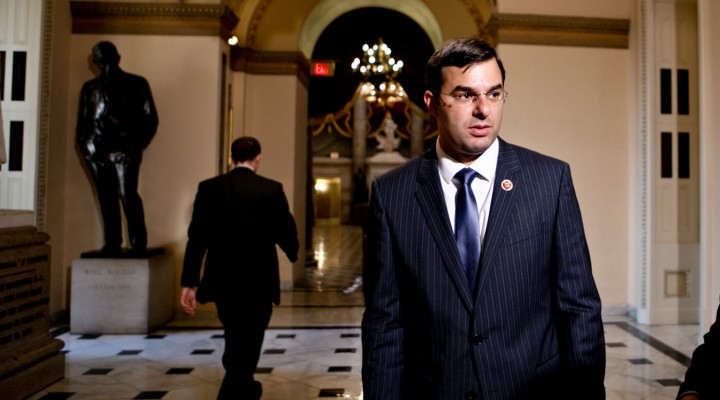 Though it is similar to H.J. Res 37, Amash’s new bill contains neither dubious loopholes nor implicit expansions of the executive branch’s power to wage war unilaterally without express congressional approval.

While many opponents of the U.S.-backed and Saudi-led war in Yemencelebrated the House’s recent passage of a bill aimed at ending U.S. support for that war, Rep. Justin Amash (R-MI) has claimed that the bill – H.J. Res. 37 — had been “sabotaged” in order to expand the controversial 2001 Authorization for Use of Military Force (AUMF) that has allowed the U.S. government to wage war without congressional approval under the guise of “fighting terrorism.” In order to remedy the “sabotaged” bill, Rep. Amash has introduced a new bill that would require President Donald Trump to remove all U.S. armed forces from Yemen without any loopholes or the implicit expansion of the 2001 AUMF.

On Wednesday, the House voted in favor of H.J. Res. 37, which had been introduced by Rep. Ro Khanna (D-CA), by a margin of 248-177 and the legislation is likely to pass the Senate, where a similar bill – S.J. Res. 54 – passed last year despite Republican control of the chamber. Many commentators, politicians and media outlets have claimed that the bill “would require President Trump to end U.S. military support” for the war in Yemen.

Currently, the U.S. military has an unknown number of troops stationed in Yemen and provides logistical assistance and shares intelligence with the Saudi-led coalition waging war against its neighbor — a war that many have called genocidal for its targeting of civilians, in terms of both its bombing campaign and its creation of an artificial yet massive famine via a naval and air blockade.

The Trump administration has consistently backed the war and President Trump is likely to veto any piece of legislation that opposes the nearly four-year-long conflict.

Ever since joining Congress, I’ve been pushing for the U.S. to end our illegal and unconstitutional involvement in Yemen. Even as support grew, @PRyan blocked the resolution over and over as tens of thousands of Yemenis died and millions starved.

537 people are talking about this

Yet, as MintPress reported last year, and as Rep. Amash recently pointed out, both H.J. Res 37 and S.J. Res. 54 would not actually end the war in Yemen because both pieces of legislation contain a major loophole that will allow the majority of U.S. troops in Yemen – if not all – to stay.

This loophole states that the president is required to remove troops “except United States Armed Forces engaged in operations directed at al Qaeda or associated forces.”

As MintPress pointed out this past December, the only U.S. troops “on the ground” in Yemen that are involved in “hostilities” (i.e., combat operations) are those that are allegedly involvedin operations targeting al Qaeda — operations that the U.S. frequently conducts jointly with the countries waging war against western Yemen, such as the United Arab Emirates and Saudi Arabia.

Furthermore, U.S. troops currently stationed in Yemen that target Al Qaeda in the Arabian Peninsula (AQAP) also collaborate with the UAE and Saudi Arabia in “intelligence sharing,” “midair refueling,” and “overhead reconnaissance” for forces involved in counterterrorism operations that the U.S. is leading. This cooperation is what the text of S.J. Res. 54 claims to want to end, but only in regard to the coalition’s war in western Yemen. However, the current text of the bill would allow all of this cooperation to continue, just not in areas where there are no claims of AQAP presence.

In addition, the bill would not end the U.S. drone war in Yemen and could allow U.S. involvement in the coalition’s war in Yemen to continue unchanged if the Saudis — themselves just caught funneling weapons to AQAP — or the Emiratis supplied even dubious “intelligence” that linked Yemen’s resistance movement Ansarullah or the Houthis to AQAP.

Slipping in a military mickey

Rep. Amash recently pointed out via Twitter that this loophole contained in H.J. Res 37 would also have troubling implications far beyond Yemen, as it would expand the 2001 AUMF. As Rep. Amash noted, the AUMF authorizes military force without express congressional approval only against those responsible for the attacks of September 11. However, the language of the new bill would authorize the president to use military force “against nebulous ‘associated forces’” linked to Al Qaeda. This point is particularly troubling given that the Trump administration – like past administrations  — has experience in linking countries it doesn’t like to Al Qaeda, without evidence, in order to justify an aggressive foreign policy.

I’ve introduced legislation to end U.S. military action in Yemen: https://www.congress.gov/bill/115th-congress/house-joint-resolution/142/text …. I couldn’t support yesterday’s legislation because it implicitly expands the 2001 authorization regarding 9/11. @RoKhanna is doing great work here, but others keep sabotaging his efforts.

.@RoKhanna introduced text the Senate passed in 2018. It creates an exception for “Armed Forces engaged in operations directed at al-Qaeda or associated forces.” But Congress did not, via the 2001 AUMF, authorize force against nebulous “associated forces,” just 9/11 perpetrators.

34 people are talking about this

Amash, however, did not blame the bill’s top sponsor, Rep. Khanna, for the problem presented by this loophole and instead claimed that Khanna “is doing great work here, but others keep sabotaging his efforts.” The Michigan congressman pointed out that some representatives led by Rep. Jim McGovern (D-MA) had written and introduced an amendment to remove the loophole from the bill with Rep. Khanna’s full support. Yet, a group of senators – who were not named by Rep. Amash – “lobbied against it [the amendment] behind the scenes,” which resulted in Rep. McGovern eventually withdrawing his amendment.

In addition to the presence of the loophole in the bill going unchallenged, Rep. Amash further noted that the House added another amendment to H.J. Res 37 that “clarifies” that the United States can continue to share intelligence with the Saudis, including intelligence on potential targets, which directly undermines the stated purpose of the bill. The U.S. has been providing intelligence on targets to the Saudi-led coalition, which are then targeted by coalition airstrikes, since last June. However, those targeted through U.S.-Saudi intelligence-sharing have frequently been civilians, including the coalition bombing of a school bus full of Yemeni children last August.

Owing to the troubling implications hidden within H.J. Res. 37, Rep. Amash voted “present” on the measure as opposed to “yes” or “no.” He was the only representative who voted in this way on account of the presence of the loophole and the implicit expansion of the 2001 AUMF. Five other representatives chose not to vote on the measure at all.

Rep. Amash, however, went even further than merely speaking out against the bill’s loophole and what the bill’s passage would mean for the executive branch’s ability to wage war without congressional approval in Yemen and beyond. Amash stated on Friday that he had introducedH.J. Res 142, a short but direct bill that reads as follows:

Congress directs the President to terminate the use of the United States Armed Forces with respect to the military intervention led by Saudi Arabia in the Republic of Yemen not later than the end of the period of 30 days beginning on the date of the enactment of this joint resolution unless and until a declaration of war or specific authorization for such use of the Armed Forces has been enacted into law.”

Though it is similar to H.J. Res 37, Amash’s new bill contains neither dubious loopholes nor implicit expansions of the executive branch’s power to wage war unilaterally without express congressional approval. The measure is currently being reviewed by the House Foreign Affairs Committee. Given the effort to “sabotage” H.J. Res 37, however, it remains to be seen how far Amash’s bill will advance through a U.S. Congress that remains highly susceptible to pressure from the Saudi lobby and the U.S. military-industrial complex.