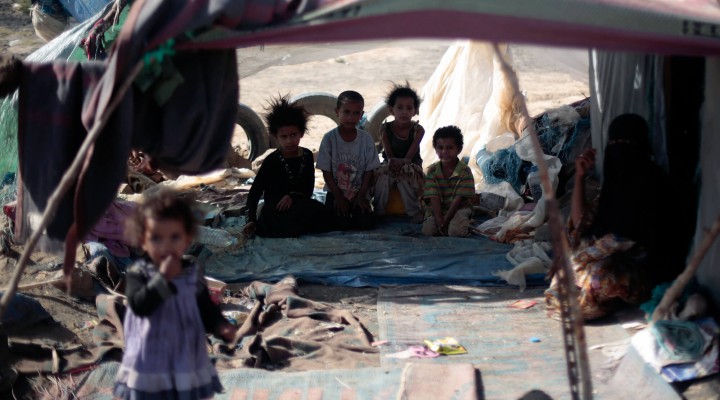 MPN- The Saudi-led coalition’s choice to continue raining bombs down on key civilian infrastructure shows its determination, in their pursuit of regional geopolitical dominance, to push the Yemeni people to the brink of annihilation by starvation, preventable disease and explosions.

A report from the Sana’a-based Yemeni government has revealed that the conflict in Yemen — sometimes called the “Forgotten War,” owing to sparse international media coverage — continues to grow more dire with each passing day.

Among the report’s most troubling findings are the staggering number of people who were displaced by fighting last year, with 3.8 million people forced to flee their homes, many of them from the still-besieged port of Hodeida, over the course of 2018. Many of these refugees have sought refuge in or near the Yemeni capital of Sana’a, whose international airport remains under blockade from the Saudi Arabia-led and U.S.-supported coalition.

Another highly troubling aspect of the situation in Yemen, as revealed by this recently released report, is the continued closure of key food warehouses – including those controlled by the World Food Program and the World Health Organization – that are storing food for as many 3.5 million people. While these facilities remain closed, an estimated 18 million Yemenis face severe food insecurity and starvation, including 5 million children. Worse still, the report noted that the Saudi-led coalition bombed four such food warehouses in addition to two trucks carrying food aid, just during the month of December.

The statistics released by the government in Sana’a also reveal the continuation of the Saudi-led coalition’s targeting of critical civilian infrastructure, such as farms and water pumps. According to government figures, during December 2018, the coalition razed 94 farms and damaged another 128 while destroying 68 water pumps and water storage tanks. One hundred and thirty two livestock were also killed by coalition bombs. The U.S. military intelligence has been “fine tuning” the coalition’s airstrike target list since last June, making the U.S. complicit in these crimes against Yemeni civilians. A graphic from the report shows Dec. 2018, targets of the Saudi Coalition in Yemen

These figures corroborate the findings of Martha Mundy, Professor Emeritus of Anthropology at the London School of Economics, who recently published a report that asserted that the coalition sought to halt Yemen’s remaining food production as well as its food distribution capacity. This claim is also supported by the fact that, despite the coalition publicly claiming that it has “lifted” the naval blockade of Yemen, 90 percent of importers cannot bring goods into the port of Hodeida, through which the majority of Yemen’s imported food and essential goods passes.

The coalition has justified its targeting of critical food production and water sanitation infrastructure by claiming that Yemeni resistance fighters were hiding weapons in those areas, but have never provided evidence of weapons being found in targeted installations.

The report also notes that the bombing campaign targeting Yemen continues to result in a dizzying number of airstrikes, with a total of 1,509 airstrikes in resistance-held Yemen during last December. The government in Sana’a had previously stated that Yemen, over the course of last year, suffered over 52,000 attacks — including airstrikes, naval bombardments and artillery operations, as well as an average of 50 airstrikes per day.

However, what makes the December figure so striking is the fact that “peace negotiations” took place early on in that month, which ostensibly led to a ceasefire that the Saudi coalition went on to violate over 800 times. During the month of peace negotiations and alleged ceasefire, 61 civilians were killed by coalition attacks, including 15 children. Another 109 civilians were wounded and 2,293 civilian homes — many likely unoccupied, with their former residents now displaced refugees — were destroyed or severely damaged.

While many continue to hope for a swift and peaceful outcome to the atrocious and genocidal war against Yemen, the Saudi-led coalition’s choice to continue raining bombs down on key civilian infrastructure — specifically areas involved in food production during a time of unprecedented famine — shows that these powerful governments and their allies remain determined, in their pursuit of regional geopolitical dominance, to push the Yemeni people to the brink of annihilation by starvation, preventable disease and bombs.